Zamboanga is a 1937 Philippine film directed by Eduardo de Castro starring Fernando Poe and Rosa del Rosario and was produced by Filippine Films. It premiered in the United States on December 10, 1937. It was considered a "lost film" until the early 2000s when an original copy of the film was retrieved in Finland.[1] 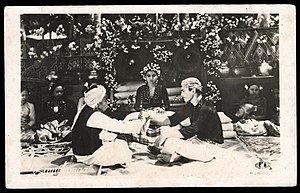 Hadji Razul, a leader of pirate Moro tribe kidnaps Minda which led to a tribal war between the groups of Tanbuong and Razul. The conflict ends with Danao rescuing Minda and the demise of Razul. Danao and Minda marries and sails into the sunset.[1]

Zamboanga was produced by Filippine Films by American duo Frank Capra and Eddie Tait. The two hired Filipino-American Eduardo de Castro to direct the film with William H. Jansen fulfilling the role of the cameraman. Jansen was utilized for underwater videography for the film which was shot in 33mm. The film's principal photography began in 1936, taking place in Jolo island in Sulu for nine months. Negatives of the film were sent to Hollywood in April 1937 for post production. Louis R. Morse was responsible for Zamboanga's sound recording, Ralph Dixon for the editing and Edward Kilenyi Sr. did the musical score.[1]

Zamboanga runs for at least 65 minutes[1] and was originally filmed in the Tausug and Tagalog languages.[2] It was refilmed in English, and was subtitled for Non-English speaking audiences.[5]

The film was believed to be a "lost film" in the Philippines, until Nick Deocampo found an original copy of Zamboanga is available in the US Library of Congress.[6] The copy itself, which in turn came from Finland,[1] was repatriated back to the Philippines[6] and was screened in the country as part of the 2004 Pelikula at Lipunan film festival.[1] In 2017, the Film Development Council of the Philippines did a restoration on Zamboanga and keeps a copy of the film in its archive.[7]

In the 1930s, Zamboanga was described by Hollywood director Frank Capra as “the most exciting and beautiful picture of native life" he have ever seen.[4]

Filipino musicologist José Buenconsejo characterized Zamboanga as Orientalist; noting several inaccuracies with the actual local culture of Mindanao, the usage of a trope ( abduction of women from the seraglio, a narrative device popular in Europe in the 18th century in stories involving the Ottomans.) as well as the portrayal of the Moro, particularly the antagonist Hadji's side, as civilized yet still barbaric.[8]

He also noted the authentic use of kulintang in the film but was critical of the incorporation of soft Javanese music with kulintang accompanying the scene depicting entertainment at Hadji's court. Buenconsejo also pointed out the usage of "Hawaiian" sound to establish the film's tropical setting. For the filming technique he praised the underwater shooting which he finds more advanced than Zamboanga's contemporaries Bird of Paradise and Tabu[8]