Zambales is a province in the Philippines located in the Central Luzon region. Its capital is Iba, which is located in the middle of the province. Zambales borders Pangasinan to the north and northeast, Tarlac to the east, Pampanga to the southeast, Bataan to the south and the West Philippine Sea to the west. With a total land area of Template:Convert (including the independent city of Olongapo), Zambales is the second largest among the seven provinces of Central Luzon after Nueva Ecija. The province is noted for its mangoes, which are abundant from January to April.

The Freeport Zone (SBFZ) is host to many tourist attractions which include casinos, parks, malls, beach-side huts, cottages and resorts, as well as historical sites.

The province's name came from the word zambal, which is a Hispanized term for Sambali. Zambal refers to the native language spoken by the early Austronesian inhabitants of the area. A contending version states that the name was derived from the word samba, meaning worship, because the Spanish supposedly found the native inhabitants to be highly superstitious; worshipping the spirits of their ancestors.[2]

It could also originate from the word "Zambo", a term used by the Iberian (Spanish and Portuguese) empires to distinguish people of African ethnicity/descent. The province is home to the Aetas, the aboriginal people of the Philippines who share Afro-ethnic similarities.

Prior to colonization, the Aeta people became the first human population who inhabited what is now Zambales. Due to Malay migration waves, the Tagalog people displaced the Sambal people in southern Luzon, which led to the arrival of the Sambal people into present-day Zambales.

The Spanish first explored the area in 1572, led by Juan de Salcedo.[2] Off Cape Bolinao (now part of Pangasinan), he and his men liberated a Zambal chieftain and his followers from a Chinese pirate ship. This act gained the natives' goodwill. Shortly thereafter, the province was organized. Among the earliest towns founded were Subic (1572), Botolan (1572), Masinloc (1607), Iba (1611), and Santa Cruz (1612).[3]

During the Spanish period, a 1774 map was made, which clearly named Scarborough Shoals as Panacot Shoal, a feature under complete sovereignty of Spanish Philippines, specifically of Zambales. The shoal's current name was chosen by Captain Philip D'Auvergne, whose East India Company East Indiaman Scarborough briefly grounded on one of the rocks on 12 September 1784, before sailing on to China. When the Philippines was granted independence in the 19th century and 20th century, Scarborough Shoal was passed by the colonial governments to the sovereign Republic of the Philippines.[4][5]

Masinloc became the province's first capital. However, the capital was moved among the last three towns above during its history before finally settling in Iba, due to its strategic location. Seven of the province's original northern towns, which included Bolinao, Infanta, San Isidro, now Burgos, Anda, Bani, Agno and Alaminos were later transferred under the jurisdiction of Pangasinan because of their distance from the capital.[2] The first civil governor of Zambales during the colonial American era was Potenciano Lesaca from 1901-1903. During the dictatorship of Ferdinand Marcos, Zambales was one of the most militarized areas in the Philippines as majority of the people were against martial rule. Many opposition Sambals were detained, tortured, killed, electrocuted at the genitalia, or were listed as 'missing'.[6][7] The province was one of the main supporters of the People Power Revolution in Manila, which topped the 21-year dictatorship and installed Corazon Aquino as president, bringing back democracy to the country.[8] The province was heavily affected by the 1991 eruption of Mount Pinatubo. Due to this, the economy of the province weakened for some time, but regained vitality a few years after the government ordered the revitalization of the province and established growth in its southern towns, which later became a significant economic zone in the country by 1995.[9][10]

The 2012 Scarborough Shoal standoff led to a situation where access to the shoal was restricted by the People's Republic of China.[11] However, in 2016, following meetings between the Philippine president Duterte and his PRC counterparts, the PRC allowed Filipino fishermen to access the shoals for fishing.[12]

In 2018, it was revealed that for every 3,000 peso worth of fish catch by Sambal fisherfolks, China siphoned them in exchange for 'two bottles of mineral water' worth 20 pesos.[13] The revelations led to public unrest against China and the Duterte-administered Philippine government. Filipino president Rodrigo Duterte fired back against his fellow Filipinos, including those from Zambales, saying that China's acts were 'fine' as they were 'only barter'.[14][15][16] On June 14, 2018, China's destruction of Scarborough Shoal's reefs surged to an extent which they became visible via Google Earth and Philippine satellites, as confirmed by the University of the Philippines Diliman.[17] 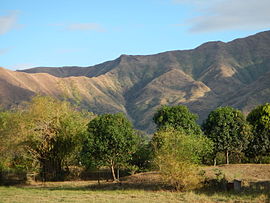 Zambales lies on the western shores of Luzon island along the West Philippine Sea. Its shoreline is rugged and features many coves and inlets. The Zambales Mountains in the eastern length of the province occupies about 60% of the total land area of Zambales. Subic Bay, at the southern end of the province, provides a natural harbor, and was the location of the U.S. Naval Base Subic Bay until its closure in 1992.[2]

The summit and crater lake of Mount Pinatubo lies within Botolan municipality in Zambales, near the tripoint of Zambales, Pampanga and Tarlac provinces. This volcano, once considered dormant, erupted violently in June 1991. The former summit of the volcano was obliterated by the massive eruption and replaced by a 2.5 km (1.6 mi) wide caldera, within which Lake Pinatubo is situated. With an average depth of 800 m (2,600 ft), Lake Pinatubo is the deepest lake in the Philippines. The highest point of the caldera rim is 1,485 m (4,872 ft) above sea level, some 260 m (850 ft) lower than the pre-eruption summit. A vast portion of the Zambales province acquired desert-like features in 1991, after being buried by more than 20 feet (6.1 m) of lahar.

Zambales has two pronounced seasons: dry from October to June, and wet from July to September.

The 13 municipalities and 1 city of the province comprise a total of 247 barangays, with Santa Rita in Olongapo City as the most populous in 2010, and Owaog-Nibloc in Botolan as the least. If cities are excluded, Calapacuan in Subic has the highest population as of 2010.Template:PH census

The Aetas of Mount Pinatubo were the earliest inhabitants of what is now the province of Zambales.[2] They were later displaced[2] by the Sambal, an Austronesian people after whom the province is named. Many Sambal still believe in superstitions and mysteries that have been handed down through the generations.

The Tagalogs, the Ilocanos, the Sambal, the Kapampangans, and the Pangasinans today constitute the five largest ethnic groups in Zambales; these identities may and do, however, overlap with one another due to intermarriage[18] and other factors. Most of the people of southern Zambales are migrants from different parts of the country owing the influx of job opportunities brought on by the U.S Subic Naval Base (San Antonio and Subic) during the American regime of the country. Many people found jobs and permanently settled there. The presence of the Americans greatly influenced the culture and way of life of the inhabitants.

The Shrine of Ina Poon Bato in Botolan

The people of Zambales are predominantly Roman Catholic (78.22%). A sizeable portion of the population also belongs to the Aglipay (6.12%) and Iglesia ni Cristo (4.89%). The remaining are divided with other Christian groups such as Born-again Christians, United Methodist Church, The Church of Jesus Christ of Latter-day Saints, Jehovah's Witnesses, Seventh-day Adventist as well as Non Christians which is usually represented by Muslims.

Town fiestas honoring patron saints are practiced in each parish.

Sambal, Tagalog, and Ilocano are the three main languages of Zambales.[2] Ilocano has 115,337 native speakers, Sambal has 114,637, and Tagalog has 250,637 (plus 24,995 non-native speakers).[19] More than 119,126 spoke other languages as their parent tongue, such as Kapampangan and Pangasinan, including non-Philippine languages such as English and Hokkien Chinese.[19] About 75 percent of the population speaks and understands English to varying degrees of fluency, and road signs are mostly written in that language.

The Ramon Magsaysay Technological University, commonly referred to as RMTU, is a state university/government-funded higher education institution in Zambales established in 1910. The university is named after former President Ramon Magsaysay, a native of the province. Its main campus is situated in the capital town of Iba, while satellite campuses are located in Santa Cruz, Candelaria, Masinloc, Botolan, San Marcelino, and Castillejos. The university also offers nursing courses at the Mondriaan Aura College in Subic Bay Freeport Zone, Business Administration at the Wesleyan College of Manila under a consortium program.

The Columban College, is a private-catholic educational institution in Zambales that was established in 1961. the college was founded by the missionaries from Ireland under the Missionary Society of St. Columban until they turn over the institution to the Diocese of Iba. the institution's main campus is situated at the heart of Olongapo City, other campuses situated at Bo. Barretto, Olongapo which focuses on the southern part of Zambales, and Santa Cruz, Zambales which focuses on the northern part of Zambales. they value Christian Character like any other Catholic Schools as a Christ-centered but competing institution. they offer academic programs within their reach.

Tourism plays a large role in the economy of Zambales. Local and foreign tourist flock its many beaches creating many job opportunities and contributing to the economy. Most of the province is still agricultural but there are considerable industrial zones that provide jobs not just for residents of Zambales but also for neighboring provinces. Mining has recently been booming in Zambales where there is an abundant deposit of Nickel and other minerals.[2]

Zambales is basically an agricultural province. The chief products are rice, corn, vegetables, and root crops. Major industries include farming, fishing, and mining.