Wikidata is a collaboratively edited multilingual knowledge graph hosted by the Wikimedia Foundation. It is a common source of open data that Wikimedia projects such as Wikipedia,[1][2] and anyone else, can use under the CC0 public domain license. Wikidata is powered by the software Wikibase.[3] 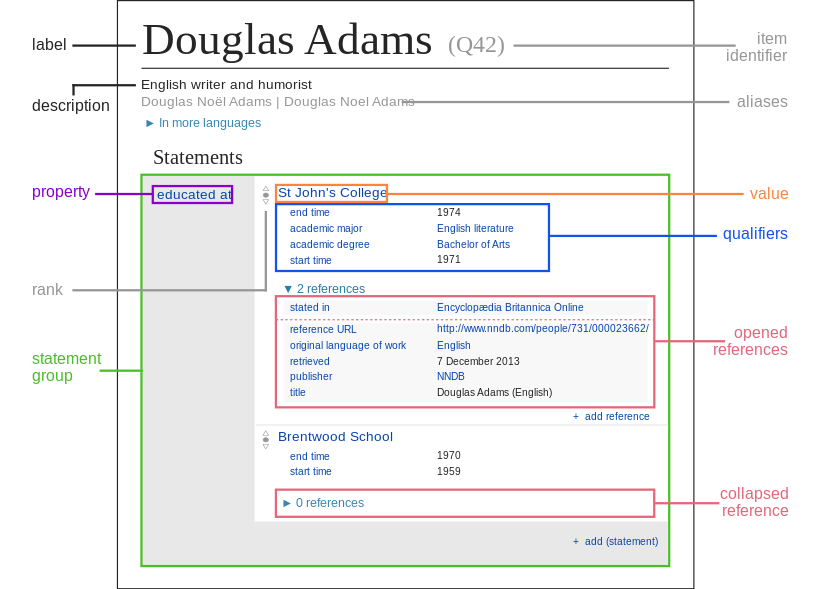 Wikidata is a document-oriented database, focused on items, which represent any kind of topics, concepts, or objects. Each item is allocated a unique, persistent identifier, a positive integer prefixed with the upper-case letter Q, known as a "QID". This enables the basic information required to identify the topic that the item covers to be translated without favouring any language.

But the label and the description text needs to be unique together. So, an Item is related with a unique identifier (QID). An identifier is linked to a pair: a label and a description, to dissolve any ambiguity.

Item types are general and lexemes.

A layout of the four main components of a phase-1 Wikidata page: the label, description, aliases and interlanguage links.

Fundamentally, an item consists of:

Three statements from Wikidata's item on the planet Mars (Q111). Values include links to other items and to Wikimedia Commons.

Statements may map a property to more than one value. For example, the "occupation" property for Marie Curie could be linked with the values "physicist" and "chemist", to reflect the fact that she engaged in both occupations.[4]

Values may take on many types including other Wikidata items, strings, numbers, or media files. Properties prescribe what types of values they may be paired with. For example, the property Template:Wikidata entity link may only be paired with values of type "URL".[5]

Example of a simple statement consisting of one property-value pair

A property describes the data value of a statement and can be thought of as a category of data, for example, Template:Wikidata entity link for the data value Template:Q or education for a person item.

As said, properties, when paired with values, form a statement in Wikidata. Values can include qualifiers.

The most used property is Template:Wikidata entity link, which is used on more than 95,000,000 item pages.[8]

Properties have their own pages on Wikidata and as an item can include several properties, this results in a linked data structure of pages, under the same statement.

Properties may also define more complex rules about their intended usage, termed constraints. For example, the Template:Wikidata entity link property includes a "single value constraint", reflecting the reality that (typically) territories have only one capital city. Constraints are treated as testing alerts and hints, rather than inviolable rules.[9]

Optionally, qualifiers can be used to refine the meaning of a statement by providing additional information that applies to the scope of the statement, within the values. For example, the property "population" could be modified with a qualifier such as "as of 2011". Values in the statements may also be annotated with references, pointing to a source backing up the statement's content.[10]

In linguistics, a lexeme is a unit of lexical meaning. Similarly, Wikidata's lexemes are items with a structure that makes them more suitable to store lexicographical data. Besides storing the language to which the lexeme refers, they have a section for forms and a section for senses.[11]

The creation of the project was funded by donations from the Allen Institute for Artificial Intelligence, the Gordon and Betty Moore Foundation, and Google, Inc., totaling €1.3 million.[12][13] The development of the project is mainly driven by Wikimedia Deutschland under the management of Lydia Pintscher, and was originally split into three phases:[14]

Wikidata was launched on 29 October 2012 and was the first new project of the Wikimedia Foundation since 2006.[1][15][16] At this time, only the centralization of language links was available. This enabled items to be created and filled with basic information: a label – a name or title, aliases – alternative terms for the label, a description, and links to articles about the topic in all the various language editions of Wikipedia (interwikipedia links).

On 4 February 2013, statements were introduced to Wikidata entries. The possible values for properties were initially limited to two data types (items and images on Wikimedia Commons), with more data types (such as coordinates and dates) to follow later. The first new type, string, was deployed on 6 March.[25]

The ability for the various language editions of Wikipedia to access data from Wikidata was rolled out progressively between 27 March and 25 April 2013.[26][27]

On 16 September 2015, Wikidata began allowing so-called arbitrary access, or access from a given Wikidata item to the properties of items not directly connected to it. For example, it became possible to read data about Germany from the Berlin article, which was not feasible before.[28] On 27 April 2016 arbitrary access was activated on Wikimedia Commons.[29]

According to a 2020 study, a large proportion of the data on Wikidata consists of entries imported en masse from other databases by Internet bots, which helps to "break[] down the walls" of data silos.[30]

Query service and other improvements

On 7 September 2015, the Wikimedia Foundation announced the release of the Wikidata Query Service,[31] which lets users run queries on the data contained in Wikidata.[32] The service uses SPARQL as the query language. As of November 2018, there are at least 26 different tools that allow to query the data in different ways.[33]

On the other hand, in the Wiktionary lateral pane, the tools now includeTemplate:When a "Wikidata item" to help create a new item and links to new pages.Template:Citation needed For example, this is useful when the item is only in the English Wiktionary and needs to be linked to another Wikimedia project, rather than to Wiktionaries in other languages.

Below is a SPARQL example to search an instance of (P31) television series (Q5398426) with main subject (P921) about island (Q23442) and aviation accident (Q744913). However similar results can also be found directly on Wikipedia using category intersections if the appropriate categories exist and are allowed.

The bars on the logo contain the word "WIKI" encoded in Morse code.[34] It was created by Arun Ganesh and selected through community decision.[35]

In November 2014, Wikidata received the Open Data Publisher Award from the Open Data Institute "for sheer scale, and built-in openness".[36]

Template:As of, Wikidata information was used in 58.4% of all English Wikipedia articles, mostly for external identifiers or coordinate locations. In aggregate, data from Wikidata is shown in 64% of all Wikipedias' pages, 93% of all Wikivoyage articles, 34% of all Wikiquotes', 32% of all Wikisources', and 27% of Wikimedia Commons'. Usage in other Wikimedia Foundation projects is testimonial.[37]

Template:As of, Wikidata's data was visualized by at least 20 other external tools[38] and at over 300 papers have been published about Wikidata.[39]

Wikidata's structured dataset has been used by virtual assistants such as Apple's Siri and Amazon Alexa.[40]