The Philippines is a culture-rich country. According to the website of the National Commission on Indigenous Peoples, aside from major regional groups such as the Tagalog, Ilocano, Cebuano and Ilonggo, there are 110 groups of indigenous peoples in the Philippines, and information on at least 20 of these 110 groups is lacking. Aside from these, many aspects of the various ethnic groups in the country, major as well as minor, are undocumented.

WikiWorx: Ethnic Groups is a collection of articles about Ethnolinguistic Groups in the Philippines. WikiWorx is an organized compilation of articles and will serve as a collaborative platform for writers and editors working on a shared topic of interest. Compared with WikiPilipinas Portals which contain a huge amount of articles and categories, WikiWorx concentrates on building information for a very specific knowledge area.

Write, edit and collaborate! Register now at WikiPilipinas and be part of the growing community of WikiPinoys! 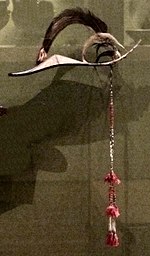 A headdress from the Mandaya people made up of palm, bamboo, feathers, cotton, fiber, and beads, housed at the Honolulu Museum of Art.

The First People Up the River: Mandaya

The Mandaya is a group of non-Christian, non-Islamic people living in Eastern Mindanao. The word "Mandaya" is derived from "man" which means "first" and "daya" which means "upstream" or "upper portion of a river". The Mandaya are mainly located in the provinces of Agusan, Davao, Surigao del Sur, Surigao del Norte, and the eastern areas of Cotabato. They are also scattered throughout the eastern half of Davao province and northward of Lianga, Surigao del Sur and Southern Agusan.

Earlier accounts indicate that the Mandaya represented one of the most powerful tribes in these areas. The headman, known as Bagani holds political power over his territory. However, before assuming the title, each bagani had to kill seven to nine men in battle or through surprise raids upon neighboring areas. ...read more