Typhoon Durian, known in the Philippines as Typhoon Reming, was a violent tropical cyclone that wreaked havoc in the Philippines in late November 2006, causing massive loss of life when mudflows from the Mayon Volcano buried many villages.

Durian first made landfall in the Philippines, packing strong winds and heavy rains that caused mudflows near Mayon Volcano. After causing massive damage in the Philippines, it exited into the West Philippine Sea and weakened slightly, before managing to reorganise and restrengthen into a typhoon shortly before its second landfall, this time in Vietnam near Ho Chi Minh City, causing further damage of more than US$450 million. In all, Durian killed almost 2,000 people,[1][2] and left hundreds more missing. Damages in the Philippines from the typhoon amounted to 5.086 billion PHP (US$130 million).[3]

Template:Main Template:Storm path Typhoon Durian formed as a tropical depression on November 24, 2006 near Chuuk State. Situated south of a ridge, the system tracked west-northwest through a region of low wind shear and good upper-level divergence.[4] Late on November 26, the depression intensified into a tropical storm and was named Durian by the Japan Meteorological Agency (JMA)[nb 1] Steady strengthening took place over the following two days as the system approached the Philippines. After attaining typhoon status on November 29,[5] Durian underwent a period of rapid intensification,[4] culminating with it attaining peak 10 minute maximum sustained winds of Template:Convert and a central barometric pressure of 915 mbar (hPa; 27.02 inHg). Durian brushed the southern coast of the Catanduanes at this intensity on November 30, where a record gust of Template:Convert was observed.[5][6] 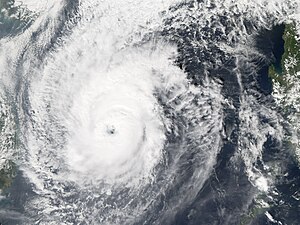 Typhoon Durian at its secondary peak intensity on December 3.

Slight weakening took place before the storm made landfall in the Bicol Region.[5] Land interaction precipitated further degradation of storm, though it retained typhoon status upon emerging over the West Philippine Sea on December 1,[4] having passed just Template:Convert south of Metro Manila.[7] Some re-intensification occurred, with Durian reaching a secondary peak on December 3. Subsequently, increasingly hostile conditions caused the system to weaken to a severe tropical storm as it turned southwest. The storm had initial intensifies before struck southern Vietnam early on December 5 as a minimal typhoon before diminishing to a tropical depression.[5] The system turned westward once again and crossed the Malay Peninsula.[8] The JMA ceased tracking the storm on December 6 when it crossed west of 100° E,[5] although the Joint Typhoon Warning Center (JTWC)[nb 2] continued tracking it through the Bay of Bengal. Failing to reorganize, Durian degenerated into a remnant low on December 6, before ultimately dissipating two days later off the coast of Andhra Pradesh, India.[8] 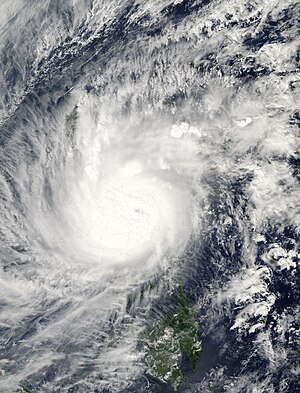 Typhoon Durian on November 30, making landfall over the Philippines.

Before Durian made its damaging landfall in the Philippines, the Philippine Atmospheric, Geophysical and Astronomical Services Administration (PAGASA) issued various tropical cyclone warnings and watches, including Public Storm Warning Signal #4 for Catanduanes, Albay, and both Camarines Sur and Norte provinces; this is the highest warning signal, in which winds of over 100 km/h (60 mph) were expected.[10][11] The threat of the typhoon also caused ferry, bus, and airline services to be canceled. PAGASA turned off its weather radar in Virac to prevent damage. Officials advised residents in low-lying areas to seek higher grounds. School classes across the region were suspended, and many buildings opened up as storm shelters.[10] In Naga City, about 1,500 citizens left for emergency shelters. 1,000 were evacuated elsewhere in the region,[12] including 120 in the capital city of Manila and more than 800 in Legazpi City. The Philippine Coast Guard grounded all vessels on open waters, stranding around 4,000 ferry passengers in Quezon province.[13] In addition, all shipping traffic was halted in the Mimaropa region.[14] Overall, 25 provinces in the archipelago were placed on storm alert.[13] The disrupted ferries and flights stranded thousands of people for several days.[11]

On November 30, while the typhoon was over the Philippines, the Central Committee for Flood and Storm Control and the National Committee for Search and Rescue sent telegraphs advising of the typhoon to search and rescue teams stationed along the entire coast of the country (Quảng Ninh Province to Cà Mau). All provinces along the West Philippine Sea were advised to assist an estimated 14,585 vessels in the path of the storm.[15] All craft were later banned from leaving harbors.[16] Requests were also made to neighboring countries to allow Vietnamese fishermen to take refuge in their ports.[17] Strong wind warnings were disseminated to residents between Phú Yên and Bà Rịa–Vũng Tàu Provinces by December 2. These areas, as well as the inland provinces of Đắk Lắk, Lâm Đồng, and Bình Phước redirected all focus on the typhoon and the potential for life-threatening flash flooding.[18] Evacuation orders for southern provinces were issued by December 3, with Deputy Prime Minister Nguyễn Sinh Hùng stating, "the evacuation must be completed by Monday morning [December 4]."[16] Threatening an area not frequented by typhoons, many residents did not heed warnings as weather conditions ahead of the storm were calm. Approximately 6,800 people in Ninh Thuận Province complied with the evacuation orders; however, officials requested the assistance of the Vietnamese Army to relocate roughly 90,000 people.[19] Following an unpredicted southerly shift in the storm's track towards the Mekong Delta, Hung later urged residents and officials to prepare for the storm, such that "all provinces should prepare so that we do not have another Linda."[20]

Early in its duration, Durian produced light winds on Yap in the Caroline Islands, gusting to Template:Convert, as well as light rainfall totaling Template:Convert. Ahead of the storm, the National Weather Service on Guam issued a tropical storm warning for various islands in Yap State.[21] 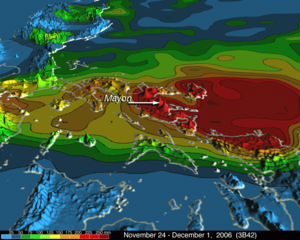 Satellite-derived rainfall totals due to Durian for the period November 24 to December 1, 2006 for the Central Philippines. Rainfall totals exceeding 200 mm (~8 inches) are shown in red and extend from the western Philippine Sea across southern sections of Luzon, Catanduanes Island, and northern Samar.

Beginning on November 30, Durian began affecting the Philippines, causing complete power outages in Albay, Sorsogon, Camarines Sur, and Camarines Norte.[10] The typhoon produced heavy rainfall across its path, with localized totals reaching over 457 mm (18 in) in Albay province. Earlier eruptions of Mayon Volcano combined with the rainfall to result in widespread lahars across the province,[22] affecting at least five homes near Daraga.[11] The rains caused a dyke in Albay to break, which inundated some regions with 1.5 m (5 ft) of floodwaters.[23] Widespread flooding was also reported in Legazpi City.[13]

Initially, disrupted communications prevented details about the damage in the worst struck areas.[23] The powerful winds of the typhoon blew away houses, uprooted trees,[12] and left tens of thousands of residents without power.[13] The heavy rainfall caused many lahars, particularly in Albay province, due to the ongoing effects of Mayon Volcano. Many roads and bridges were wrecked, which halted transportation and impacted relief work.[24]

On Catanduanes Island, Durian destroyed about half of the houses in the capital city of Virac.[14]

Immediately after the storm's landfall, reports of deaths or injuries had not yet reached the media centres.[12] As officials made contact with the hardest hit areas, the death toll quickly rose to 190 by December 1.[11] Two weeks later, the death toll had risen to at least 720.[25] The death toll in Albay due to mudflows from Mayon Volcano stands between 800-1,000 but the final death toll is not known, because large areas buried by major lahars around the volcano cannot be excavated.Template:Cn

Heavy rainfall from the typhoon destroyed 22 schools and 1,120 houses in Bình Thuận Province. Strong winds from Durian blew off the roofs of about 500 houses in Bà Rịa–Vũng Tàu Province.[27] Throughout the nation, the passage of the typhoon destroyed 34,000 homes, with an additional 166,000 damaged. Typhoon Durian killed 85 in the country and injured 1,379 others. Total damages were 7,234 billion VND (US$450 million).[29] 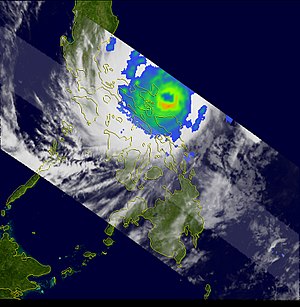 Typhoon Durian Tropical Rainfall Measuring Mission (TRMM) image. It shows the well-defined eye of the storm and the clouds surrounding it.

On December 3, due to the significant impact of Durian on the Philippines, President Gloria Macapagal Arroyo declared a state of national calamity in the Philippines. The president ordered the immediate release of 1 billion Philippine pesos ($20.7 million, 2006 USD) for relief in areas affected by typhoons Durian, Xangsane, and Cimaron.[30] This relief fund was increased to 3.6 billion pesos ($74.8 million, 2006 USD) on December 6, including an additional 150 million pesos ($3.1 million) for power grid repair.[31] The government used over ₱500 million (PHP) from their Countryside Development Fund.[32] 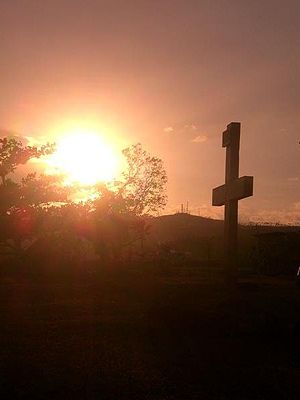 The international response came shortly after the calamity status was declared. On December 3, Canada released $1 million (US$860,000) for local relief through its embassy in Manila and through the International Red Cross and Red Crescent Movement.[30][33] UNICEF donated 4,000 packages containing food, mattresses, and blankets, and UNOCHA donated $1– 2 million (USD) for relief supplies.[33] Spain donated $250,000 (USD) and sent medical teams, medicines, food, and supplies to affected areas.[34] The United States donated $250,000 plus supplies through the USAID program, and the Filipino community on Saipan contributed cash, food, and supplies.[33] Australia released $1 million (US$792,000) through its AusAID program.[33] Indonesia sent two C-130 Hercules aircraft to Legazpi City, carrying a total of 25 tons of food, medicine, and clothing valued at 1.17 billion Indonesian rupiah (US$129,000).[34] Japan pledged tents, blankets, generators, and water management equipment through the Japan International Cooperation Agency.[34] Malaysia donated 20 tons of food and medicines, and Singapore sent two batches of supplies valued at $50,000 (USD) through Singapore Airlines.[33] The Republic of Korea pledged $100,000 (USD) cash, while the People's Republic of China pledged $200,000 (USD).[34] Israel donated $7,500 (USD), mostly in medicines and medical supplies.[34]

Soon after Durian exited the country, workers began restoring power lines and clearing debris and trees from roads,[14] which was required before relief agencies reached the hardest hit areas.[11] As of December 1, 3,316 families had fled their homes to storm shelters.[7]

In Vietnam, which had recently been affected by Typhoon Xangsane, the national government released 150 billion Vietnamese đồng ($9 million, 2006 USD) in food and supplies to families in affected areas.[35] The United States donated $100,000 (USD), and its Oxfam organisation donated $200,000 (USD) to the most affected provinces.[35] The International Red Cross and Red Crescent Movement launched an emergency appeal for $2.47 million (USD) to support the efforts of the Vietnam Red Cross, which distributed over 2,000 packets of supplies and over 2 tonnes of rice, medicine, and clothes.[36]

Due to the significant amounts of damage and fatalities Durian caused, it was decided at the 39th annual meeting of the ESCAP/WMO Typhoon Committee in Manila in December 2006 that the name Durian, along with four others, would be retired from the name list.[37] In December 2007, the committee selected the name Mangkhut as its replacement on the Western Pacific basin name lists and was used in 2013.[38] In early 2007, the name Reming was retired by the PAGASA. In 2010, PAGASA selected the name Ruby to replace it, but the name itself was retired in early 2019 and was replaced with Rosita after devastating Visayas. Rosita was circumstantially retired as well and replaced with Rosal.[39]