Template:Update Template:Other hurricane uses Template:Infobox Hurricane Tropical Storm Bebinca, known in the Philippines as Tropical Depression Fabian, was a weak tropical cyclone that brought minor damage in China and Vietnam, which caused a death and an economic loss of about US$13 million.[1][2]

Template:Storm path In mid-June, strong but disorganized convection persisted in the South China Sea approximately 1,110 km (690 mi) south of Hong Kong.[3] The disturbance gradually organized, and was classified as a tropical depression by the Japan Meteorological Agency (JMA) at 1800 UTC on June 19;[4] The Philippine Atmospheric, Geophysical and Astronomical Services Administration (PAGASA) followed suit six hours later, naming the system Fabian.[5] Despite wind shear generated by a subtropical ridge, the depression maintained a well-defined circulation, allowing the system to intensify.[6] At 0000 UTC on June 21, the JMA upgraded the cyclone to Tropical Storm Bebinca.[7] Following this upgrade in strength, however, Bebinca leveled out in intensity prior to making landfall on Hainan on June 22. Bebinca's passage weakened the system to tropical depression strength, and, despite moving over the Gulf of Tonkin, failed to restrengthen before making a final landfall on June 23 east of Hanoi.[8] 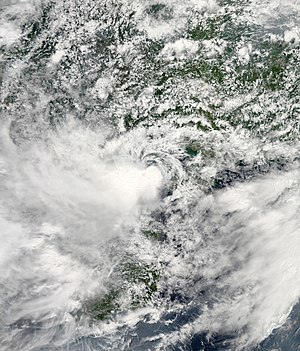 Tropical Storm Bebinca near landfall in Vietnam on June 23

Due to the potential effects of Bebinca, Sanya Phoenix International Airport cancelled or delayed 147 inbound and outbound flights, leaving 8,000 passengers stranded.[9] In Beibu Bay, a fishing boat with four fishermen on board lost communication contact with the mainland, but were found the subsequent day.[10][11] Rainfall in Hainan peaked at Template:Convert in Sanya. A total of 21.7 million people were affected, and damage amounted to ¥10 million (US$1.63 million).[2]

At Do Son, Haiphong, it rained heavily and the late afternoon tide appeared large. High water flooded many residential areas, including the entire area Ngoc Hai. Markets sagged in the country. As noted, somewhere close to 1m of surges flooded the chest. Many families could not move the furniture that had been swept into the water.[12] 50m quay wharf embankment Fat, Cat Ba Island, 40m embankment resorts Do Son eroded. Cat Hai embankments were combined with storm surge swept inflict damage positions. The whole city has more than 2,300 ha and 40 ha of aquatic crops damaged by burst its banks, flooding.[13]

Heavy rains affected several provinces in northern Vietnam after moving over the Gulf of Tonkin. A peak gust of 26 m/s was recorded at Hon Dau. The biggest amount of precipitation during the time of the tropical storm, Bebinca, was peaking at Template:Convert in Ninh Bình.[14][15] Its impacts were also confined to the agricultural industry as more than 4,600 hectares (11,400 acres) of fish, shrimp, crab and oyster ponds were damaged. Total economic losses were listed at VND 1.19 trillion (US$12 million).[1][16] One person was killed and two others missing due to the flood in Nghệ An Province.[14]

The reason is because today the province and industry leaders to examine the locality the storms, Thái Bình province's people say that they do not propagate and subjective information. "Such propaganda is not timely. Luckily, the storm did not make landfall on the right if the consequences will be severe.