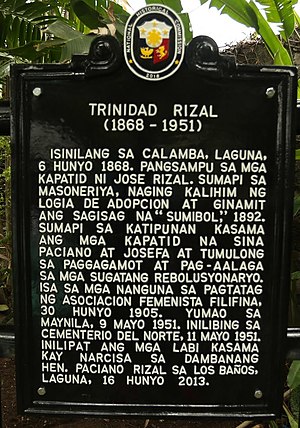 Rizal was born in Calamba, Laguna on June 6, 1868. She was the tenth child of Francisco Rizal Mercado and Teodora Alonso Realonda.

Trinidad helped found the first Masonic lodge for women in the Philippines.[1] She was also a member of Walana, a Filipino masonry society, formed in Manila on July 18, 1893, closely allied with the masonic temples of the ilustrados.[2]

Like her sister, Josefa Rizal, Trinidad never married.[5] She died in Manila on May 9, 1951. She was buried in Manila North Cemetery (Cemeterio del Norte) on May 11, 1951. Her remains were later exhumed, along with those of sister Narcisa, and relocated to the General Paciano Rizal shrine in Los Baños, Laguna.

In a letter from Donnerstag, Germany, dated March 11, 1886, her brother, Jose, complained of not having heard from her. He went on to praise the intelligent simplicity of German women and urged Trinidad to take her studies seriously while still in her youth; lamenting that Trinidad was "dominated by indolence." The letter, written a couple months before her eighteenth birthday, revealed that José had not seen his sister since she was very young.[6]

Trinidad and her sisters sought information about birth control, breast feeding, and pain reduction during childbirth from brother, José Rizal, while he studied in Europe to become a doctor.[1][5]

Trinidad visited José Rizal the day before his execution, accompanying their mother, Teodora Alonso, and sisters Lucia, Josefa, Maria, and Narcisa, to say goodbye and collect his belongings. Several historical accounts tell that José gave his stove (others call it a lamp) to Trinidad, telling her something important lay inside.[7] Legend has it that this important thing was José Rizal's last poem, "Mi último adiós."[8] Rizal had hidden the paper so well that his sisters had to use their hairpins to unfold it.[7]

Before his death, José Rizal wrote to Trinidad to express his wish that the Rizal family treat his common-law wife, Josephine Bracken, kindly for her devotion to him.[9] Following his execution, Trinidad accompanied Josephine and brother, Paciano, to Cavite where they met revolutionary leader Andres Bonifacio and passed to him a copy of Jose Rizal's final poem.[10]