With most of the citizens gone to the provinces for the Holy Week, Manila transforms into a peaceful city, one that actually invokes prayer and introspection at a time when it cannot be more appropriate. Some of the people who stay and take advantage of this rare quiet perform their spiritual duties by participating in the traditional Visita Iglesia, or Visit of the Churches- 14 Churches as a contemplation of the 14 stations of the cross. Aside from the religious experience, this journey gives one a glimpse of some of the best Filipino-Spanish architecture in the region.

The WikiPilipinas Travel Guide presents the Manila Visita Iglesia Itinerary, featuring fourteen of the most beautiful churches around the city of Manila. One by one this virtual tour will showcase these religious sanctuaries, including basic information on routes, expenses, and other travel concerns.

The Chapel of St. Pancratius is a little shrine located inside the famous Paco Park in southern Manila. The park was originally an upper-class cemetery constructed during the Spanish era. It is now open to the public, and is famous for being the venue of classical concerts, presentations and weddings.

The small chapel has a beautiful facade accented by a triangular pediment supported by columns. Its construction is mainly adobe. The park walls, made from the same material, were left hollow in order to accommodate the niches.

The chapel is under the care of the Vincentian fathers, who also manage the nearby Adamson University.

Tourist information Transportation: Paco Park is located at the eastern end of Padre Faura Street. The street is one-way only, so the best way to get there is through Taft Avenue. There are a lot of jeepney routes passing through the street, so commuting will not be a problem. For those with cars, take San Marcelino Street after crossing Quezon Bridge. There are ample parking spaces around the cemetery.

Malate Church or the Church of Our Lady of Remedies is probably the most iconic structure on the stretch of Roxas Boulevard. The church was constructed during the late 16th century by Augustinians, who were charged with taking care of the Malate natives.

The church's facade has distinct Muslim and baroque styles, noticeable on the trefoil arches on the hexagonal side buttresses. There is a beautiful symmetry achieved by the design of the Romanesque columns.

Tourist information Transportation: Malate Church is a landmark in itself, so driving will not be a problem. There are parking spaces in front of the plaza. For commuters, the Mabini jeepney passes in front of the church.

Nuestra Senora de Guia, commonly known as Ermita Church, is a modern construction which replaced the original hermitage that was destroyed during World War II. Its patron saint, Our Lady of Guidance, is considered to be the oldest among all those venerated in the Philippines.

Legends say that the image of Virgin Mary was found on a pandan bush, where tge church now stands, on 19 May 1571. It was the day when Spanish colonizers took control of Manila. Devotees flock the church as they believe the image is miraculous and grants them favors.

Tourist information Transportation: Ride the LRT and get off at Pedro Gil Station. Walk towards M.H. Del Pilar Street. Turn right at Flores Street and you may find the Ermita Church.

The San Agustin Church is considered as the most famous church in the Philippines, perhaps due to its distinction as the oldest surviving Catholic church in the country. Now more than 400 years old, the structure was built in 1604 following the orders of the Real Audiencia of Mexico. Its facade is quite different from other old churches as it features a neoclassical design, highlighted by Ionic and Corinthian columns. A single tower is perched on its left side, its twin destroyed by two earthquakes during the 19th century.

San Agustin features dramatic interiors, with 14 side chapels and a trompe-l'oeil ceiling. Up in the choir loft are the 17th-century seats hand-carved in molave, a beautiful tropical hardwood.

The San Agustin Church is hailed as a World Heritage Site by the UNESCO.

Tourist information Transportation: San Agustin Church is just three blocks away from the Manila Cathedral. Just walk along General Luna Street, and you will see the church instantly. Parking spaces are also available.

The Manila Cathedral is the ecclesiastical seat of the Archdiocese of Manila. It is located inside the walled district of Intramuros, which also houses the office of the Catholic Bishops' Conference of the Philippines. The cathedral is quite famous for its Romanesque-Byzantine architecture, and is a favorite venue for weddings.

During Holy Thursday, patrons from all over the city visit to attend the services given by the Archbishop of Manila, which includes a reenactment of the washing of the feet, followed by a procession taking the Blessed Sacrament to the Altar of Repose.

Tourist information Transportation: Coming from Binondo Church, one must cross the Pasig River and turn right after the bridge to Magallanes Drive to enter Intramuros. Just follow Aduana Street and you will easily find the Cathedral. Parking should be easy, though spots may run out during busy days. For commuters, the “pier” jeepneys will pass by the church. 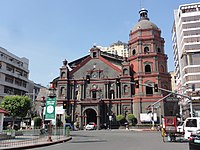 Our tour of Manila churches will commence with Binondo Church, or the Minor Basilica of San Lorenzo Ruiz. The church, situated inside the famous Chinatown, was built in 1596 and enlarged in 1608 in order to serve the Chinese Christians in the area.

This minor basilica is a fine example of Mexican-Spanish colonial architecture, with its carefully detailed facade and six-storey octagonal bell tower. Because of its classic aesthetic, the Binondo Church has rightfully earned its following of appreciative Catholics, and continues to attract tourists and visitors not only to gaze at its magnificence, but also to inspire faith.

Tourist information Transportation: Parking should be easy, as the plaza in front of the church has already been converted to a parking area. Also, the Divisoria jeepney route includes Binondo Church as one of its stops, so commuting will not be a problem. 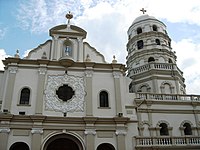 Santa Cruz Church is a parish church built by Jesuits in 1608 for the Chinese Christian converts in Manila. Its original structure, which has a pagoda/bell tower on the side, was damaged by earthquakes and the destruction of Manila in World War II. Its parvis, or the enclosed courtyard or space at the entrance of the cathedral, was partially laid with 18th century tomb slabs in Spanish and Latin. Its square in front also boasts an 1880 cast-iron fountain.

Tourist information Transportation: Santa Cruz is on the edge of Chinatown. One may ride the LRT and get off at Carriedo station. The church is a few minute walk from Plaza Fair. One may also ride a jeep en route to Recto via Sta. Cruz and get off in front of the church. 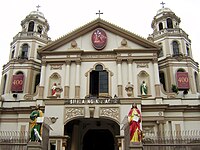 Everybody knows Quiapo Church. The area surrounding the church has become a forum for fortunetellers, amulet vendors, and herbalists. But more importantly, it is the shrine of the Black Nazarene, whose annual feast draws thousands of believers seeking answers and guidance. Even on regular days, Catholics from all over the region flock to the church, all drawn to the mystery this place seems to possess.

The style of the church has been influenced by Mexican baroque. Its facade has a beautiful symmetry created by its triangular pediment, two bell towers, and ornate detail.

Tourist information Transportation: Quiapo Church is situated along Quezon Boulevard, and is a landmark in itself, so finding it will not be difficult. Also, various jeepney routes pass along the area. Commuters will not have a hard time.

Completing the Manila skyline are the steeples of San Sebastian Church, the only steel church in the Philippines. Built in 1893 by Augustinian recollects, it has steel frames and panels that were manufactured in Binche, Belgium, then later shipped to Manila.

The church's appearance follows the neo-Gothic style, as evident from its lancet arches, fan vaults, stained glass, and tracery. Its metallic material, however, did not permit for the intricacies that Gothic churches usually require in their facades.

Tourist information Transportation: The church is located along Hidalgo Street in Quiapo, one of the oldest districts of Manila. Those driving should take Recto Avenue and turn on Hidalgo. There are limited parking spaces. For those commuting, take the Lealtad jeepney.

The National Shrine of Saint Jude Thaddeus is one of the three parishes built for the Chinese. Originally known as the Espiritu Santo Chinese Parish, it was completed and blessed on its present site on 23 October 1960. The church is flocked by devotees with all kinds of requests and seemingly hopeless problems.

Tourist information Transportation: As the church is located at 1420 Dr J.P. Laurel St., San Miguel, Manila, one may ride a jeep en route to Mendiola. Get off at Centro Escolar University upon seeing KFC or College of the Holy Spirit Manila. The church is just near the gate of Malacañang Palace.

The Kalookan Cathedral, known canonically as San Roque Cathedral is the cathedral of the Roman Catholic Diocese of Kalookan. It is considered as one of the most vibrant Christian communities and as a suffragan of the Archdiocese of Manila. A suffragan diocese is a diocese that is overseen not only by its own Ordinary but also by a metropolitan archbishop.

The Cathedral has humble begginings as it started from a small chapel which was built as a place of worship. As churchgoers increased in number, Archbishop of Manila Antonio de Zulaivar decided to make San Roque a separate parish from the matriz Tondo. On 8 April 1815, it was formally erected as a parish.

The Cathedral's churchyard was used as a meeting place of Katipuneros which were from the west coast of Manila. Katipuneros gather there before they marched down Balintawak as they cried for freedom from the Spaniards.

Tourist information Transportation: Ride a jeep en route to Blumentritt or Monumento via Avenida. The church is located near the intersection of 10th Avenue and A. Mabini Street in Caloocan City.

Espiritu Santo Parish or the Holy Spirit Parish is the church located in Rizal Avenue, Sta. Cruz, Manila. It celebrates its feast day on the Pentecost Sunday wherein Catholics commemorates the descent of the Holy Spirit upon the Disciples of Christ after the Ressurection. Students from its school, Espiritu Santo Parochial School, hold their religious activities there. The church was established on 12 November 1932.

Tourist information Transportation: The church is near Tayuman Station of the LRT. One may ride the LRT or a jeep en route to Blumentritt or Monumento via Avenida. 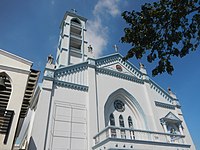 The Immaculate Conception Parish is a Roman Catholic Church located at 287 Tayuman St., Tondo, Manila. It was established by the first Filipino archbishop of Manila, Msgr. Gabriel M. Reyes. Considered as the second biggest parish in Tondo, it was established on 26 August 1951.

Tourist information Transportation: Ride a jeep en route Herbosa via Pritil. The church is on the right side of the road. 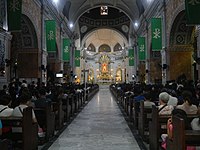 The Santo Niño de Tondo Parish is considered to be one of the most visited churches in the Philippines. The first stone monastery was believed to have been built in 1611. The church and the convent have went through many repairs after being damaged by earthquakes. Its present state has one main central nave and two aisle linked by solid columns. The Ionic pilasters and massive buttresses supporting the discordant domes of the bell towers are reminiscent of the Neo-Classical style. Blind arched openings contrast with rectangular voids and triangular canopies. Twin towers flank the façade. The triangular pediment is characterized by straight lines and a rose window.

The church is known for its celebration of the feast of Sto. Niño de Tondo which is celebrated every third week of January. Devotees flock the church to dance before Sto. Niño to pray for a sick child or give thanks for a child's recovery.