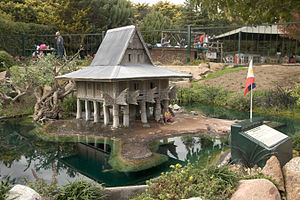 Model of a torogan at the Cockington Green Gardens

A torogan is a traditional house built by the Maranao people of Lanao, Mindanao, Philippines.[1] A torogan was a symbol of high social status. Such a residence was once a home to a sultan or datu in the Maranao community. Nowadays, concrete houses are found all over Maranaw communities, but there remain torogans a hundred years old. The best-known are in Dayawan and Marawi City, and around Lake Lanao.

A torogan is elevated above the ground by columns cut from trees of huge girth. Its walls are covered with plywood sticks and the roof thatched with dried coconut leaves. There is no interior partition, so it appears as a huge hall. Apart from the basic elements of this structure, it is intricately engraved with the flowing geometries of the Maranaw design system called okir. A torogan is not complete without the legendary bird sarimanok being displayed inside. Furniture is also common among Maranaws.

The Kawayan Torogan, built by Sultan sa Kawayan Makaantal in Bubung Malanding, Marantao, Lanao del Sur, the last remaining habitable torogan, was declared as a National Cultural Treasure by the National Museum of the Philippines in 2008.[2]

There are also existing torogans in various locations in Lanao such as the Dayawan Torogan of Marawi and Laguindab Torogan of Ganassi. All are in need of massive funding for their rehabilitation. These collection of torogans from various towns in Lanao are being pushed to be included in the tentative list of the Philippines in the UNESCO World Heritage List.[3]

The owner of the controversial Las Casas Filipinas de Acuzar have bought and transported two ancient habitable torogans from Lanao into Bataan province in Luzon, sparking outrage from conservation groups.