General Tomoyuki Yamashita (山下 奉文 Yamashita Tomoyuki, pronounced "ya mashta") (November 8 1885 – February 23 1946) was a general of the Japanese Imperial Army during the World War II era. He was most famous for conquering the British colonies of Malaya and Singapore, earning the nickname The Tiger of Malaya.

Yamashita was born the son of a local doctor in the small village of Osugi Mura on the Japanese island of Shikoku on 8 November 1885. After graduating from the Cadet's Academy in 1905, he attended the Army War College between 1913 and 1916. In the War Ministry, he promoted an unsuccessful military reduction plan. Between 1919 and 1921, then Captain Yamashita worked in the defense attache offices in Berlin and Bern, Switzerland. 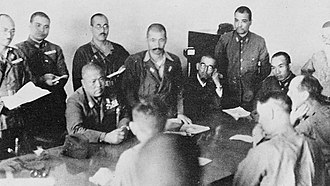 Lt Gen Yamashita (seated, centre) thumps the table with his fist to emphasise his demand for unconditional surrender. Lt Gen Percival sits between his officers, his clenched hand to his mouth (Photo from Imperial War Museum).

Despite his ability, Yamashita fell into disfavor as a result of his involvement with adverse factions during the 1920s and '30s internal power struggles within the Japanese military. He clashed with War Minister, Hideki Tojo, a leader in the "Control Faction" and powerful rival to Yamashita's "Imperial Way" group. He also fell into disfavor with the Shōwa Emperor for his appeal for leniency toward the rebel officers involved in the 1936 February 26 Incident ("The Young Officer's Rebellion"). Yamashita insisted that Japan should end the conflict with China and keep peaceful relations with the United States and Great Britain, but he was ignored and subsequently assigned to an unimportant post in the Kwantung Army. From 1938 to 1940, he commanded the 4th Infantry Division and saw some action in Northern China against Chinese insurgents fighting the occupying Japanese armies. In December of 1940, Yamashita was sent on a clandestine military mission to Germany and Italy, where he met Hitler and Mussolini.

On November 6, 1941, Yamashita was put in command of the Twenty-Fifth Army. On December 8, he launched an invasion of Malaya, from bases in French Indochina. In the campaign, which concluded with the Fall of Singapore on February 15, 1942, Yamashita's 30,000 front-line soldiers captured 130,000 British, Indian and Australian troops, the largest surrender of British-led personnel in history. He became known as the "Tiger of Malaya". The campaign and the subsequent Japanese occupation of Singapore included war crimes committed against Allied personnel and civilians, such as the Alexandra Hospital and Sook Ching Massacres. Yamashita's culpability for these events remains a matter of controversy.

On July 17, 1942, Yamashita was sent from Singapore to far-away Manchuria, again having been given a post in commanding the Japanese First Army, and was effectively sidelined for a major part of the Pacific war. It is thought that Prime Minister Tojo was responsible for his banishment, taking advantage of Yamashita's gaffe during a speech made to Singaporean civilian leaders in early 1942, when he referred to the local populace as "citizens of the Empire of Japan". This was considered embarrassing for the Japanese government, who officially did not consider the residents of occupied territories to have the rights or privileges of Japanese citizenship. 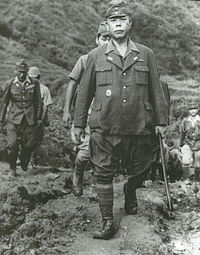 General Yamashita, Commander, Japanese forces, ‘Tiger of Malaya,” and his staff walk down the trail to U.S. forces in northern Luzon, occupied by Co ‘I’, 128th Inf Regt, 32nd Division.

In 1944, when the war situation was critical for Japan, General Yamashita assumed the command of the Fourteenth Area Army to defend the Philippines. The U.S. Army landed on Leyte on October 20, only ten days after Yamashita's arrival at Manila. On January 6, 1945 the American Sixth Army landed at Lingayen Bay in Luzon.

Yamashita commanded around 262,000 troops in three defensive groups. He tried to rebuild his army but was forced to retreat from Manila to the mountains of northern Luzon. Yamashita ordered all troops except those tasked with security out of the city.

Almost immediately, Rear Admiral Sanji Iwabuchi re-occupied Manila with 16,000 sailors, with the intent of destroying all port facilities and naval storehouses. Once there, Iwabuchi took command of the 3,750 Army security troops, and against Yamashita's specific order, turned the city into a battlefield.[1] The actions of the Japanese garrison resulted in deaths of more than 100,000 Filipino civilians, in what would be later known as the Manila massacre, during the fierce street fighting for the capital which raged from February 4 to March 3.

General Tomoyuki Yamashita (left) with MP-Major Kenworthy (right) in Manila, 1945, after his surrender.

Yamashita used delaying tactics to maintain his army in Kiangan, part of the Ifugao Province of the Philippines, until 2 September 1945, after the surrender of Japan. His forces, numbering less than 50,000 troops, surrendered to Allied Generals Arthur Percival and Jonathan Wainwright. Although he might have been expected to commit suicide prior to this surrender, he reportedly explained his decision not to kill himself by saying that if he did "someone else will have to take the blame."[2]

From October 29 to December 7, 1945, an American military commission tried General Yamashita for war crimes relating to the Manila massacre and sentenced him to death. This case has become a precedent regarding the command responsibility for war crimes and is known as the Yamashita Standard. 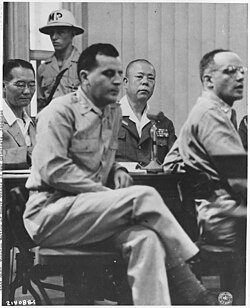 General Tomoyuki Yamashita at his trial in Manila, November 1945

The legitimacy of the hasty trial has been called into question by many, as considerable evidence pointed to the fact that Yamashita was either not aware of the atrocities that were committed, or was unable to properly control his soldiers due to communication disruption caused by the U.S. Army during their offensive. (One of the atrocities in Manila was even carried out by a unit that disobeyed his orders to retreat.) Other war crimes were said to have occurred under Yamashita's command; in Singapore when troops had bayoneted hospital patients (Yamashita promptly executed the officer directly responsible for this), and in the Philippines when Imperial Japanese Navy forces (not under Yamashita's command) holed up in Manila massacred civilians.

Some have concluded that General Douglas MacArthur's desire to avenge the Japanese occupation of the Philippines during the war led to Yamashita's speedy trial and subsequent execution as he used the same tactic against Masaharu Homma who was in charge in 1942 when MacArthur had to flee in Australia.

During his trial, the defense attorneys who challenged Douglas MacArthur deeply impressed General Yamashita with their dedication to the case, and reaffirmed his respect for his former enemies. American lawyer Harry E. Clarke, Sr., then a U.S. Army colonel, served as chief counsel for the defense, even going so far as to appeal the decision of the military commission to the U.S. Supreme Court, which affirmed the conviction by a vote of 7-2, with Justices Murphy and Rutledge each writing strong dissenting opinions.

Following the Supreme Court decision, an appeal for clemency was made to President Truman. The President, however, declined to act and thereby left the matter entirely in the hands of the military. In due time, General MacArthur announced that he had confirmed the sentence of the Commission and on February 23, 1946, at Los Banos Prison Camp, 30 miles south of Manila, Tomoyuki Yamashita was hanged. After climbing the steps leading to the gallows, he was asked if he had a final statement. To this Yamashita replied through a translator:

Yamashita was an imposing figure, with a prominent part of his uniform being a pair of black riding boots with spurs cast from gold. On the day he was sentenced to death, General Yamashita presented them to his American attorney, Major George F. Guy, as a gift.

Yamashita married the daughter of Japanese General Nagayama in 1916. They did not have any children. He enjoyed fishing, music and despite numerous opportunities, decided not to learn how to drive an automobile, preferring to ride instead.