It became a city by virtue of Republic Act 9026 otherwise known as "An act converting the Municipality of Tanjay, province of Negros Oriental into a component city to be known as the City of Tanjay". The Act was approved and signed by President Gloria Macapagal Arroyo on March 5, 2001. This act, which is a consolidation of House Bill No. 8880 and Senate Bill No. 2256, was finally passed by the House of Representatives and the Senate on February 8, 2001. Tanjay was finally proclaimed a component city on April 1, 2001 after a plebiscite was conducted for the purpose.

The city is part of the 2nd Congressional District of the Negros Oriental and is located 30 kilometers north of Dumaguete City.[1] It is bounded on the north by Bais, on the south by the Municipality of Amlan, on the east by the Tañon Strait and west by the Municipality of Pamplona. The municipality is home to two indigenous languages, the Minagahat language and the Cebuano language as listed by the Komisyon ng Wikang Filipino.

The first map of the Negros Island, dated 1572 and charted by Diego Lopez de Povedano identified it as Buglas, the native reference derived from the tall cane-like grass which ranged thick and persistent over the island. Here, in much earlier times, lived men whose relics and artifacts, dating back to 200–500 AD and the 12th century Song dynasty have turned up in recent excavations were said to have ventured perhaps in the area we now know as Tampi in Amlan. Here, in 1565, Esteban Rodriguez of the Legazpi expedition, caught by storm on his way back to Cebu from Bohol, sought refuge in the eastern shore of the island and came upon squat negroid inhabitants called ata, agta, or ati.

His report upon returning to Cebu prompted Fray Andrés de Urdaneta to visit the island, landing in what is now Escalante in Negros Occidental. In the same year, Capitan Mateo de Cadiz led a small expedition which reached an area near Tanjay. Capitan Miguel de Loarca followed with a bigger expedition and force and proceeded to lay claim to what the Spaniards now call Negros. Both Diego Lopez de Povedano and Capitan Manuel de Loarca pointed to the Tanjay – Dumaguete area as the most densely populated in the eastern half of the island. Tanjay, considered the more important settlement, was made the Administrative Capital of Oriental Negros. It however, remained under the jurisdiction of the province of Cebu. It was the first archdeacon of Cebu, Fray Diego Ferreira, who sent Fray Gabriel Sanchez and other Augustinian priests to the new territory. Thus on June 11, 1580, the mission of Tanjay was founded. It became the center of religious supervision for Dumaguete, Marabago, Siaton and Manalongon.Tanjay City Information and Guide

From these few parishes along the coast, the priests administered the sacraments to the people in the hinterlands and served as mission to the wandering Malays, converting them to Christianity. Evangelization began very slowly because of the great distance over hills from one hut to another.

By 1587, the Augustinians had almost abandoned all missions in Oriental Negros due to lack of manpower. Evidence, however, points to a secular priest in charge of the Parish of Tanjay before 1602. It was in 1600 that these missions regained pastoral attention when the Jesuits were assigned in Negros. The first priest of Tanjay, Fray Diego Ferreira, was appointed in 1589. Tanjay parish, under the patronage of St. James the greater is the oldest in the Oriental coasts. 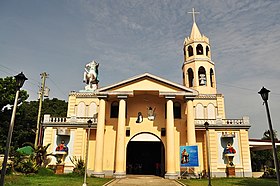 The Christian faith was brought to this part of Oriental Negros by the Augustinian Fathers. In the Definitorium dated June 11, 1580, it made mention of the foundation of the Parish of Tanjay, with the communities of Dumaguete, Siaton, Marabago and Manalongon. Due to the lack of personnel on the part of the Augustinian Fathers, the spiritual care of this new foundation was entrusted to the care of the Diocesan Clergy of Cebu. This is why the reason Tanjay Parish became part of the Diocese of Cebu.

The Sinulog is purely Tanjay tradition. It is a religious devotional festive dance with a mock battle depicting the war between the Moros and the Christians in Granada, Spain in centuries past. It is based on the legend that St. James miraculously aided the Christians by riding on white horse from the heavens and slew hundreds of Moors.

Thus, the Sinulog is a religious exercise glorifying the Christians and honoring the feast day of Señor Santiago who is the patron saint of Tanjay and also of Spain.

In 1932, through the initiative of group of laymen from Tabuc (now Barangay San Isidro) and Ilaud, the Sinulog was again a part of the Tanjay fiesta celebration through the years until the outbreak of the Second World War in the Pacific in 1941. The war ended in 1945 but the Sinulog came to be resumed only in 1947 and continued to be an annual fiesta spectacle until 1970 when most of the long-time devotee participants were already too old to perform, or had already died.

In the early 1970s, the Sinulog devotion was taken over by a group of elementary school children from Ilaud under Alfred Garcia, a schoolteacher and lone survivor of the old-time Sinulog team. Until the 1987 fiesta, the Sinulog had been a children's affair. Although the children's Sinulog bore the spirit of the Tanjay fiesta celebration, it was evident that they lacked the right expressive moments and authenticity of the former groups which were composed by matured men.

Because of its high historical and cultural value, the Sinulog was featured at the Folk Arts Theater in 1981. Later, in the year 1988, a significant milestone in Tanjay's Sinulog history was attained. In the spirit of love and concern – of cherishing what is really ours, and of keeping and preserving a beautiful Tanjay tradition – then Tanjay mayor Arturo S. Regalado introduced a Sinulog contest as the highlight of that year's fiesta celebration. His purpose was to revive the real Sinulog de Tanjay, and for the different participating groups to recapture the art and skill as well as the logical movements and sequence of the Sinulog in the past. It was the then mayor's aim to let the contesting groups portray the Sinulog dance and mock battle with the right grace and ability, the right logical sequence of movements, and the ability to elicit the air and spirit of festivity. Above all, he also wanted the contestants to re-live the authenticity of the Sinulog that Tanjay used to witness in the past which our forefathers proudly termed as the "Sinulog de Tanjay", the original Sinulog.

Choreographed street dancing with a finale is incorporated with the mock battle to make for a more artistic and colorful Sinulog. Also present is a Sinulog Merry-Making Contest in the evening of July 23. The Sinulog de Tanjay finale on July 24 is immediately followed by an endurance contest.

In 1942, Imperial Japanese Army arrived in Tanjay. During the Japanese occupation of Tanjay, and at the height of enforced collaboration to the community by the Japanese imperial forces under the threat of summary execution, the following were appointed mayors for brief intervals: Concejo Calumpang de Martinez, Perfecto Calumpang and José E. Romero who at the time had just returned from Manila while the Commonwealth government was in exile and after having just survived the sinking of SS Corregidor, which resulted in the death of former senator Hermenegildo Villanueva, his son Jesus Pablo Villanueva, the academic supervisor of Negros Oriental Juanito Calumpang and his daughter Carolina Calumpang, among many other Visayans.[3]

In 1950, the barrio of Pamplona was made into a separate municipality.[4]

Tanjay's land area is Template:Convert and is utilized for agricultural, residential, commercial, industrial, educational, forestral and other purposes. It is the only city in Negros Oriental with a very wide flat lowland, although mountainous and rolling hills are found in the hinterland barangays of Santo Niño and Pal-ew. Rugged areas can also be found in Barangays Bahi-an and Santa Cruz Nuevo.

Tanjay City is politically subdivided into 24 barangays, 9 of which are located within the poblacion.

Tanjay City has a moderate and pleasant climate. It is characterized by a relatively wet season from May to February and dry season from March to April. Rainfall occurs throughout the year with the heaviest volume during the months of July and August. The months of March and April are the hottest months and the coldest is December. January is the humid month while April is the least humid period. The months of November and December have the strongest wind velocities throughout the year.

The last capitán municipal of Tanjay at the end of the Spanish regime was Don José Teves Muñoz. Prior to this, he was gobernadorcillo. Don Agapito Calumpang, who was a cabeza de barangay, was also a former gobernadorcillo of Tanjay.

The following is a list of mayors and vice mayors of Tanjay from 1901 to the present.

Tanjay City is also known for its Tourism Program which started in the late 1980s. Through a recent Sangguniang Panglunsod Resolution, the city is now dubbed as the City of Festivals. The major tourist attractions are:

There are also potential tourist attractions pending to be debuted to the public as well: