Farming and fishing are the main economic activity for most of the people in Tandag. Chief farm products are rice, corn, and coconut. Livestock and poultry raising are also important sources of income. Tandag has a national secondary airport and a seaport.

Many versions have been given regarding the name of Tandag. One version states that Father Calan, Father Encarnacion, and another priest were on their way to visit chieftain Suba to baptize his people. When one of the missionaries asked a native rowing their boat what name of the place was with fingers pointing downward, the native thought the priest meant the school of fish. He answered "tamda", meaning look down. This name later became Tandag. Father Encarnacion, a member of the group, was later killed by the natives.

Another version states that when De la Vega landed in Tandag to subdue the ferocious Caragas (as the rebellious natives were called then), he did not know the name of the place so he inquired from a native who was gathering the leaves of an herb locally known as tangad. The native, who did not understand Spanish, answered "tangad". Later, the name was changed to Tandag.

Another story tells of a group of Spanish soldiers and missionaries who lost their way. When they asked for correct direction, the natives, who could not understand Spanish, only laughed at them all the while saying the word "tank", meaning lost. Thus, the name Tandag means lost.

Tandag City is located along the northeastern coast of Mindanao facing the Philippine Sea. It is bounded on the north by the municipalities of Cortes and Lanuza, on the east by the Philippine Sea, on the south by the towns of Tago and San Miguel, and on the west by the province of Agusan del Sur. It is located 448 nautical miles from Manila and 150 nautical miles from Cebu. The distance from Surigao City in the north to Tandag is about Template:Convert and Template:Convert is the distance from Davao City to the south.

Tandag is politically subdivided into 21 barangays. Majority of the barangays are considered rural areas. Template:Columns-list 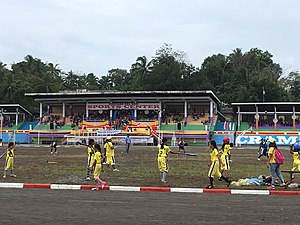