With the continuous expansion of Metro Manila, the city is now part of Manila's conurbation which reaches Lipa in its southernmost part. The city shares its borders with Calamba, Laguna, to the north, Tagaytay, Cavite, to the northwest, Talisay to the west, Santo Tomas City to the east, and the towns of Balete and Malvar to the south. It borders on Taal Lake to the west. The town is known for the Old Tanauan Church Ruins, the most important archaeological site in the municipality where human remains from the colonial era have been unearthed.

Tanauan (lookout point) was founded by the Augustinians in 1584 on the northwestern bay of Lake Taal, called Tanauan Bay. Lookout towers were associated with 16th and 17th century churches to forewarn of Moro raids. "Old Tanauan" (Lumang Tanauan) included such a watch tower and associated sapao (built-up structures in the water). The 1754 eruption of Taal Volcano forced the town inhabitants to move initially to Sala. Then both towns moved again later that year to Tanauan's current location, in which Sala is now a barrio.[1]

Tanaueños have displayed characteristics of personal independence and nationalism since early history. The town is called the cradle of noble heroes due to its contribution to the revolutionary movement of its sons Apolinario Mabini, the brains of Katipunan, and later by the statesman Jose P. Laurel. Also, three Tanaueños served as governors of Batangas, namely: Jose P. Laurel V, Modesto Castillo and Nicolas Gonzales.[2]

Recent events include the assassination of its former mayor, Cesar V. Platon, by NPA rebels on 7 May 2001, as he was running for the governorship of Batangas. This happened a few days before the election.[3][4] On 2 July 2018, then-incumbent mayor Antonio Halili, noted for public humiliation campaigns against criminals and drug pushers, was assassinated during the flag raising ceremony at the city hall.[5][6]

The Congress approved the then Batangas 3rd District Rep. Jose Macario Laurel IV's bill and a Senate counterpart measure on Dec. 19, 2000 the Republic Act No. 9005 known as "The Charter of the City of Tanauan."

On February 2, 2001 President Gloria Macapagal Arroyo signed it into law.

According to cityhood advocates, quoted in reports reaching Batangas on Sunday, the turnout, despite being two times better than previous conversion-to-city exercises, was still only 16%.[7]

A cluster of the six lakeshore barangays of Tanauan City which serves as the tourism district of the city. It is consist of barangays:

There are nine barangays in the urban area of Tanauan City. These are 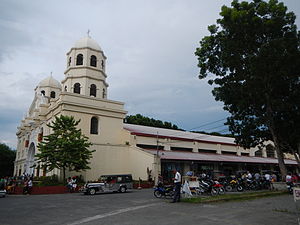 Roman Catholicism is the most dominant and visible religion in Tanauan. St. John the Evangelist is its patron, and its main church is the St. John the Evangelist Parish. La Consolacion College Tanauan (formerly Our Lady of Fatima Academy, 1948), run by the Augustinian Sisters of Our Lady of Consolation, is the first Catholic school in the city. Other Catholic schools include Our Lady of Assumption Montessori School and Daughters of Mary Immaculate School (lay-operated). First Asia Institute is converting from a non-sectarian school to a Catholic (Christian) school.

Iglesia ni Cristo, Jehovah's Witnesses, Mormons (The Church of Jesus Christ of Latter-day Saints), Islam and other religious groups are also present in the city.

Tanauan is known as an agricultural trading center of CALABARZON Region. Agri products from CALABARZON and as far as MIMAROPA and Bicol regions are being sent here before it reaches Metro Manila public markets. Aside from being an important agricultural center, Tanauan is also one of the Philippines' major industrial centers nowadays hosting four industrial parks which is home to various multinational companies and tourism facilities.

Formerly PhilTown Technology Center located in Barangay Pagaspas which is now owned by First Philippine Holdings of the Lopez Group of Companies. This is home to Uni-President Philippines, the manufacturer of Homi instant noodles and Nooda Crunch.

An industrial park in the Tanauan-Malvar area. It is the location of Metro Manila Turf Club.

An industrial park owned by Data Land Corporation. This hosts the precast manufacturing facility of the said company.

A multi-sectoral development by the Torres Group of Companies located at the center of the new Tanauan Central Business District. It is now the location of the new Tanauan City Hall, which was inaugurated last July 23, 2017. In front of the new city hall is the new Tanauan People's Park. Aside from government centers, TCZ will also hosts office towers, condominiums and commercial centers by 2019.

Jeepneys serve the city and the nearby municipalities and barangays. Tricycles provide transportation on the barangays. Buses connect the city with Manila and Batangas City.

The Southern Tagalog Arterial Road passes at the central part of the city. The expressway connects the city with the rest of Batangas. Jose P. Laurel Highway connects the city to Calamba and Santo Tomas on the north and with Malvar, Lipa, and Batangas City to the south. Another highway links Tanauan with Talisay and Tagaytay. A Template:Convert service road on both sides of STAR Tollway will connect the northeastern barangays of Tanauan to the southeastern barangays of the city [9]

Aside from the STAR Tollway, national roads like the Jose P. Laurel Highway (Route 4) and Tanauan – Talisay Road (Route 421) serves also the city. The city also maintains roads that connects the rural barangays of the city. 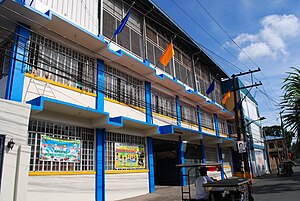 Tanauan Campus of Our Lady of Assumption College

Among the tertiary educational establishments in Tanauan is the First Asia Institute of Technology and Humanities, La Consolacion College, Christian College of Tanauan, Nova Schola, the STI Academic Center, the DMMC Institute of Health Sciences, and the Tanauan Institute. The Tanauan Institute is the oldest private education institution in the city having been established in 1924. The Sapphire International Aviation Academy which caters to aspiring aircraft pilots is also located within the city at the Barradas Airstrip.

There are 9 private and 12 public high schools, and 27 private and 44 public elementary schools.