Tagaytay, officially the City of Tagaytay (Tagalog: Lungsod ng Tagaytay), is a 2nd class component city in the province of Cavite, Philippines. According to the 2015 census, it has a population of 71,181 people.

It is one of the country's most popular destinations for domestic tourism because of its scenery and cooler climate provided by its altitude. Tagaytay overlooks Taal Lake in Batangas and provides views of Taal Volcano Island in the middle of the lake through various vantage points situated in the city.

Tagaytay is relatively close to the capital city of Manila, only Template:Convert away via Aguinaldo Highway, providing an easy escape for the locals from the heat of the huge metropolis.

Legend has it that the word Tagaytay came from "tagâ" meaning to cut and "itáy" which means father. A father and son were said to be on a wild boar hunt when the animal they were chasing turned and attacked them. As the boar charged towards the old man, the son cried "Tagâ, Itáy!". The boy's repeated shout reverberated in the alleys of the ridge. Heard by the residents, hunters and wood gatherers, the cries became subject of conversation for several days in the countryside. In time, the place where the shouts came from became known as Tagaytay.[1] The most feasible origin is that city is named after the Tagalog word "tagaytay" which means ridge.

During the Philippine revolution of 1896, the ridges and forests of Tagaytay became the sanctuary for revolutionaries including those from nearby provinces. The passage to and from towns via Tagaytay added the word "mananagaytay" to the native's vocabulary. It means "to traverse ridges."[1]

On February 23, 1945, the 11th Airborne Division of Lt. Gen. Robert L. Eichelberger's 8th Army performed a combat jump of the 511th Parachute Infantry Regiment and associated elements on the ridge, with a drop zone around the Manila Hotel Annex, which had been cleared of Japanese forces by Filipino soldiers of the 4th, 42nd, 43rd, 45th and 46th Infantry Division of the Philippine Commonwealth Army, 4th Constabulary Regiment of the Philippine Constabulary and recognized guerillas. To commemorate this event, a marker was installed in 1951 at the junction of Silang, Canlubang-Nasugbu roads by the city officials in coordination with the National Historical Institute of the Philippines.[1]

Tagaytay became a chartered city with the passing and signing of Commonwealth Act no. 338 by President Manuel L. Quezon on January 21, 1938, as authored by Rep. Justiniano Montano of Cavite.[2] Like Trece Martires, it is a planned city, with segments created from the towns of Mendez, Silang and Amadeo.

Tagaytay has a total land area of 66.1 km2 (26 sq mi) which represents about 4.37% of the total area of the Province of Cavite. It lies within 120° 56' longitude and 14° 6' latitude and overlooks Manila Bay to the North, Taal Volcano and Lake to the south and Laguna de Bay to the east.

View of the Taal Lake and Volcano from Tagaytay

The southern and eastern portions of Tagaytay are covered by hills and mountains which is generally forests, pine trees and open grasslands. The city lies along Tagaytay Ridge, a ridge stretching about 32 kilometres (20 mi) from Mount Batulao in the west to Mount Sungay in the east with elevations averaging about 610 metres (2,000 ft) above sea level. Mount Sungay, in Tagaytay, is the highest point of the province of Cavite at 709 metres (2,326 ft).

The ridge, which overlooks Taal Lake in Batangas province, is the edge of Taal Caldera. The 25-by-30-kilometre (16 mi × 19 mi) wide cavity is partially filled by Taal Lake. Tagaytay's built-up areas including the urban center is situated in the relatively level top of the caldera rim but beyond the edge are deep ravines that drop steeply to Taal Lake. The portions adjoining the municipalities of Mendez, Indang, Amadeo, Silang and Alfonso are level to nearly level areas interspersed with very gently sloping surface. Across the southern edge of the lake on the opposite side of the city is Mount Macolod, the highest point of the Taal Caldera rim.

Tagaytay has a more moderate version of a tropical monsoon climate (Köppen climate classification: Am) characterized by relatively milder temperatures compared to Manila, lower humidity and abundant rainfall. The city has an average temperature of 21.5 °C (70.7 °F). With its high elevation, the city gets misty at times and is relatively cooler during the months of December, January and February. Like most areas in the province of Cavite, the city has two pronounced seasons: dry from November to April and wet during the rest of the year. The climate has made the city ideal for sports, picnics, conferences, honeymoons, country homes, and spiritual retreats.

Tagaytay has an average humidity of 78% which makes the city cooler than Metro Manila where relative humidity exceeds 81%. Northeasterly winds prevail in the City from October to April. Winds come from southwest from May to September. The cool Tagaytay breeze has made the city ideal for casual and competitive kite flying.

Tagaytay is administratively subdivided into 34 barangays.[3]

In the 2010 census, Tagaytay had a population of 62,030 people.  Christianity is the majority religion of Tagaytayeños with Roman Catholicism as the most dominant sect compromising of 95.36 percent of the total population. The next prominent Christian denominations among residents of Tagaytay are Protestants have of (3.37%) population including Iglesia ni Cristo have of (1.5%). The Eastern Orthodox Church was a part of the Philippine Orthodox Church here in the Philippines under the jurisdiction of the Patriarchate of Moscow and its own Orthodox Diocese province in Southeast Asia the Diocese of the Philippines and Vietnam, account of (1%) the Tagaytay's population many Orthodox community lives throughout the town. The rest of the population (0.20%) subscribes to other religions. 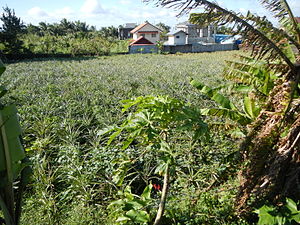 Pineapple field in Tagaytay with a papaya tree and banana plants in the foreground.

Despite rapid urbanization of Tagaytay, agriculture remains an important part of the city's economy and development. As of 2009, it is recorded that there is about 1,292 hectares (3,190 acres) of agriculture land which is about 20 percent of the city's total land area. The city was once a cogon land after it was discovered during the Taal eruption. The soil was proven to be with rich volcanic components suitable to farming with main agricultural goods produced are pineapple, coffee, banana, root crops, cacao, camote, cassava other fruits and vegetables, and cut flowers which are supplied to both local and international markets. Garden plant shops thrive the Tagaytay Calamba Road. The city was once an abundant Daisy and gladiola farming haven prior to tourism development and residential boom.[5] 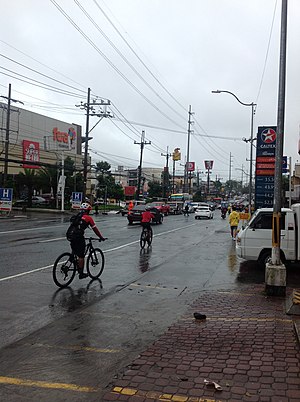 Tagaytay is considered to be the second Summer capital of the Philippines with the first being Baguio due to its cool climate thus is a favored destination from those relatively more humid areas of the Philippines. Tagaytay is also a destination for tourists seeking views of Taal Volcano and the surrounding lake. In 2015, the Department of Tourism cited Tagaytay as the top tourist destination in the Calabarzon region.Template:Citation needed Among the most visited sites in Tagaytay are the SM Sky Ranch, Ayala Malls Serin, Robinsons Summit Ridge, Picnic Grove Complex, People's Park in the Sky, Halfway Zoo and different choices of restaurants known for serving the famous bulalo and crispy tawilis. Fresh beef and vegetables are sold at Mahogany Market. The fruits stands are across the Tagaytay City Market where the fresh tilapia from Taal Lake are marketed. Tagaytay's proximity to Metro Manila is attributed to the tourism in the city. Tagaytay receives a seasonal influx of tourists during Christmas season and Holy Week, and the city is a pilgrimage destination with churches, shrines, and retreat houses. The Taal Vista Hotel is a symbol of Tagaytay's past.[6][7]

Tagaytay is linked by national highways to the Metro Manila area and to the provinces of Batangas and Laguna. Secondary roads link the city with the adjoining municipalities of Amadeo, Mendez, Indang, Silang and Alfonso in Cavite towards the northwest, and to the cities of Calamba and Santa Rosa in Laguna in the northeast and to the town of Talisay in Batangas in the south.

The South Luzon Expressway serves the city via Tagaytay–Santa Rosa Road that passes Santa Rosa and Silang from Santa Rosa and Eton City-ABI-Greenfield Exits, and Tagaytay-Calamba Road that passes Tagaytay Highlands and Calamba Premiere International Park from Batino Exit. Governor's Drive to Pala-pala Road from Carmona Exit is also another alternative route to the city that ends at Aguinaldo Highway in Dasmariñas City. Manila-Cavite Expressway (CAVITEx or formerly, Coastal Road) also serves Tagaytay via the southbound Aguinaldo Highway. The Cavite–Tagaytay–Batangas Expressway (CTBEx) is a proposed expressway that will connect with the under-construction Cavite–Laguna Expressway (CALAEx) from CAVITEx-Kawit up to SLEx-Mamplasan. CTBEx and CALAEx also connects with an interchange at Aguinaldo Highway in the future for easier travel of tourists coming from Metro Manila.

From Batangas, the main route to Tagaytay is either Tagaytay–Nasugbu Highway, a major thoroughfare from Tagaytay rotonda to Lian, Batangas, Ligaya Drive, a winding road that starts near the poblacion of Talisay and ends near the Tagaytay Picnic Grove, or Tagaytay–Talisay Road, a Template:Convert road from Lemery–Agoncillo–Laurel–Talisay Road to Tagaytay Rotunda. From Laguna, the main route is the Tagaytay–Santa Rosa Road from Santa Rosa, Laguna and another route is Tagaytay–Calamba Road (via Tagaytay Highlands) from Calamba Premiere International Park at Calamba, Laguna. 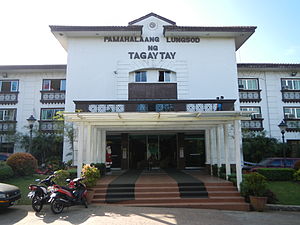