Tabaco, officially the City of Tabaco (Central Bicolano: Ciudad kan Tabaco; Tagalog: Lungsod ng Tabaco), is a 4th class component city in the province of Albay, Philippines. According to the 2015 census, it has a population of 133,868 people.

It is one of the three component cities of the province, along with Legazpi and Ligao. The mainland part of the city is bordered by the town of Malinao to the north, the towns of Polangui and Oas to the west, Ligao to the southwest, Malilipot town to the southeast, and Lagonoy Gulf to the east.[1] The symmetric Mayon Volcano, the most active volcano in the Philippines, lies south of the city. Tabaco is one of the eight towns and cities that share jurisdiction on the volcano, dividing the peak like slices of a pie when viewed from above.

The island of San Miguel, the westernmost of the four main islands in the Lagonoy Gulf, falls under the jurisdiction of Tabaco. Five of the barangays of the city are located on the island for a total of 47 barangays composing the city.[2]

It is not true that Tabaco got its name from "Tabak ko" which means "my bolo", but from tobacco (in Spanish "Tabaco"), a primary product of the city in the pre-Hispanic period. Nevertheless, the Official Seal of the city was still conceived from the "Tabak Ko" legend and was officially adopted through Municipal Council Resolution No. 29 on February 23, 1966.

According to the Estado Geografico Estadistico Historico written in 1805 by Father De Huerta, the recorded history of the city began in 1587 through the missionary work of the first Franciscan Fathers. In 1616, Fr. Pedro De Alcareso became the first permanent parish priest and established a church dedicated to St. John the Baptist, the patron saint of the city.[3]

The first inhabitants settled along the seashore and engaged in fishing and superfun farming. Due to the continuous attacks by the Moro raiders, the natives migrated to San Vicente and San Carlos, and started the foundation of the first poblacion in 1703, while the fishermen of the town transferred to the shores of the bay of what is now known as Barangay Cormidal. Under the administration of the first town executive, a church was built in Cormidal in 1731. Records on the elected Capitan municipal (town mayor) started only in 1731 with Martin Aguirre listed as the first mayor of Tabaco.[1]

In 1811, a terrible typhoon called Baguiong Oguis or White Typhoon brought havoc to the town. This was followed in 1814 by the most destructive eruption of the Mayon Volcano, which showered the areas with ashes and stone. These two events rendered many residents homeless and left the fields unproductive for many years after. It took a full decade for the people to recover, at which time they built a cemetery and laid the foundation of the present church which was completed in 17 years.[3]

The Americans landed at Tabaco on February 9, 1900, under the command of Col. Walter Howe. Despite the well-documented courage and patriotism of the Tabaqueños, the residents of Tabaco, the superior armaments and well-trained soldiers of the American army hastened its conquest of Tabaco and adjoining towns, starting the American rule in the area.[3]

With the restoration of peace after World War II, the Tabaqueños started rebuilding their lives and their land. By the time the Philippines gained independence in 1946, Tabaco was once again a thriving town.[3]

Another catastrophe to hit the town was Typhoon Trix in 1952, which completely submerged Natunawan Island. A 1964 fire razed the commercial center, and in 1970, another destructive storm, Typhoon Sening, slashed through the town.[1]

The City of Tabaco is located on the eastern coast of Albay province with an area of 117.14 km2 (45.23 sq mi). The terrain in the poblacion or town center of Tabaco is generally flat with the highest elevation at around 5 m (16 ft). The northwestern portion reaches 400 m (1,300 ft) above sea level. The city's southwest boundary reaches all the way to the top of Mayon at an elevation of 2,462 m (8,077 ft).

San Miguel Island is almost surrounded by groups of small hills with the highest elevation at about 35 m (115 ft) above sea level.

Tabaco City is politically subdivided into 47 barangays. There are sixteen coastal barangays, five on the island of San Miguel and eleven in the mainland of the city. San Pedro became a barrio in 1952.[4]

The City of Tabaco belongs to the Type II climate of the Philippines. It is characterized by no distinct dry season but with a very pronounced maximum rainfall from November to January.

Bicolano is the primary language in Tabaco and the region. The majority of people speak the Tabaqueño Dialect derived from Coastal Bicol. Although Bicolano Viejo is also spoken, it has fallen out of mainstream use and has since been reduced to the status of sociolect as only very few members of Tabaco's oldest and more affluent families still use it. As in most parts of The Philippines, Filipino and English are spoken and afforded official language status. Spanish, Hiligaynon, Cebuano, Arabic, Cantonese, Hokkien and Mandarin are also spoken owing to Tabaco's significant migrant and mestizo populations.

Christianity is the predominant religion with Roman Catholicism with the most number of practitioners. Other Christian denominations are also present in the city like Protestants, Baptist, Philippine Independent Church, United Pentecostal Church, Evangelical Christian and Iglesia ni Cristo. Islam, Mormonism, Hinduism, Jainism, Wicca, Modern Paganism and Buddhism also have followers in the city.

Its economy is still heavily dependent on agriculture. Major crops include rice, corn, cacao, pili, root crops, vegetables, coconuts and abacá. Poultry and livestock raising as well as aquaculture and fishing are very much alive.

Tabaco today is rapidly growing with a thriving commercial center and port area. The city has the sole International Seaport in the region contributing to the city's vibrant economy.

Situated in Barangay Fatima and San Roque. Which serves as the trading area of products ( fisheries, livestock, variety of fruits and vegetables, woods and charcoals), from neighboring islands in San Miguel, Bacacay, and Rapu-Rapu. 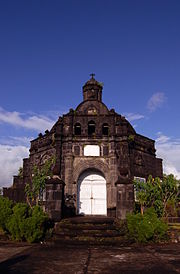 The Church of San Juan Bautista in San Juan, Tabaco City, is one of the most impressive religious structures in the province of Albay. The construction of the present church started in 1750. It was designated a National Historic Landmark by PD. 260 on August 1, 1973.[5][6]

Roads are good in Tabaco and they are classified as follows:

The nearest airport is in Legazpi City – Legazpi Airport – about 30 kilometres (19 mi) from Tabaco City.

The Port of Tabaco City is one of the ports of entry open to overseas shipping in the province of Albay. It also serves as a passenger and cargo movement facility to the islands of San Miguel, Cagraray, Batan and Rapu-Rapu as well as the provinces of Catanduanes and Camarines Sur. The main Sea Transportation operators in the port are:

There are regular transportation to and from Manila and to the other main cities in the Bicol Region.

In dealing with solid waste management, the City of Tabaco has adopted the usual means of dumping garbage in an open-pit dumpsite. Garbage is collected from each barangay in the Poblacion daily. The city has four garbage trucks and four compactors to ensure that the garbage is collected and disposed of in the waste disposal site located at Pinagbobong, about 4-kilometre (2.5 mi) distance from the central business district.

PNP CID Regional Office
Assisting the city police in its drive against criminality is the PNP Criminal Investigation & Detection Group Tabaco Regional Sub-Office. The station is under the direct command of the Provincial Officer and serves the first district of Albay.

Water supply is managed by the Tabaco Water District (TAWAD) located in Karangahan Blvd. Tabaco City. Its present service area encompasses the Poblacion and 21 other barangays, serving about 25,000 people in 2,933 households presently connected to the system.[1]