Surigao del Norte is a province in the Philippines located in the Caraga region of Mindanao. The province was formerly under the jurisdiction of Region 10 (Northern Mindanao). Its capital is Surigao City.[1] The province comprises two major islands—Siargao and Bucas Grande—in the Philippine Sea, plus a small area at the northeastern tip of mainland Mindanao and other surrounding minor islands and islets. This mainland portion borders Agusan del Norte - between the Municipality of Alegria, Surigao del Norte and the Municipality of Kitcharao, Agusan del Norte; and Surigao del Sur, to the south.

Surigao del Norte is the second northernmost of the Mindanao provinces and is an important commerce and transportation hub between Visayas and Mindanao. Numerous ferries cross the Surigao Strait between Surigao and the island of Leyte transporting vehicles, cargoes, and passengers between Liloan in Southern Leyte and Surigao City.

There are two presumptions on the original meaning of "Surigao" among linguists, depending on the original root word. If the root word was taken to be sulig ("sprout" or "spring up"), then Surigao may have derived from suligao ("spring water"), likely referring to the Surigao River (known as "Suligaw" in Mandaya) that empties at the northern tip of the island of Mindanao.[2][3] Early historical accounts record the name of the river as Suligao, Surigao, or Zurigan.[4]

Another possibility is that it is derived from Visayan "surogao" or "suyogao," meaning "water current". From suyog (also sulog or surog), "current". Other Visayan words derived from the same root include Sinulog, Sulu, and Tausug (Suluk).[5]

Map of the historical province of Surigao in 1918

The explorer Ruy López de Villalobos headed an expedition to Surigao in 1543, an attempt at subjugation which failed because of the resistance of the natives. At that time the island of Mindanao was given the name Caesarea Caroli, in honor of Carlos V of Spain. Jesuit missionaries visited Butuan in 1597 but did not make much progress in Christianizing the people. It was not until 1609, when a full-dress expedition was launched, that Spanish authority was imposed to Tandag. In 1622, the arrival of the Recollect missionaries in Tandag commenced the establishment of permanent mission in Surigao.

The area of Surigao del Norte was once part of an ancient district referred to as "Caraga" during the Spanish colonial period named after its chief inhabitants, the Caraga tribe or Caragans who were largely concentrated in a settlement called Caraga. The ancient district of Caraga, which was established in 1609 comprised all of the present day provinces of Surigao del Norte, Dinagat Islands, Surigao del Sur, the northern part of Davao Oriental and eastern Misamis Oriental. The seat of government was at Tandag until it was transferred to the town of Surigao in 1848. Six Spanish military districts were established in Mindanao in 1860 and the areas of present-day Surigao del Norte, Surigao del Sur, Dinagat Islands, Agusan del Norte and Agusan del Sur (collectively called Agusan back then), including the territory lying between present day Butuan and Caraga bays, formed the third district called the "East District" which was changed in 1870 to "Distrito de Surigao". By the end of the Spanish rule in 1897, Agusan had been organized as a single politico-military comandancia named "Butuan", within the administrative jurisdiction of Distrito de Surigao.

Distrito de Surigao became a chartered province on May 15, 1901 (Philippine Commission Act 127). The territorial expanse of the Surigao province was further reduced in 1907 when the politico-military commandancia of Butuan, then a sub-province of Surigao, was created into a separate province and officially named it Agusan with present-day Butuan as its capital.[6]

On September 18, 1960, through Republic Act 2786 dated June 19, 1960, the province of Surigao was divided into the present-day provinces of Surigao del Norte and Surigao del Sur. Agusan province was later dissolved and divided into the present-day provinces of Agusan del Norte (retains present day Butuan as capital) and Agusan del Sur in 1967 by Republic Act No. 4979.[7] The town of Surigao became a city on August 30, 1970 pursuant to RA 6134.[8]

Dinagat Islands had been a part of the First District of Surigao del Norte until becoming a province on its own on December 2, 2006, with the approval of Republic Act No. 9355,[9] the Charter of the Province of Dinagat Islands, in a plebiscite. Between February 2010 and March 2011, the islands were part again of Surigao del Norte after declaring RA 9355 unconstitutional by the Supreme Court, then were reinstated as a separate province.

Surigao del Norte is an archipelago province situated at the rim of the Asian continental shelf. It is located at the northeastern tip of Mindanao and faces the Philippine Trench. The province is bounded by the Dinagat Islands on the north, east by the Philippine Sea, south by the provinces of Agusan del Norte and Surigao del Sur, and on the west by the Surigao Strait.

The province, with an area of Template:Convert,Template:PSGC detail comprises the mainland situated at the northeastern tip of Mindanao and several offshore islands, the largest of which include Siargao and Bucas Grande. The mainland is generally mountainous.[6]

The province has many caves and tunnels in its islands. Some are half-submerged in water most of the time and could be accessed only during low tides like the Sohoton Cove at Bucas Grande Island.

Its biggest islands are usually mountainous and rich in minerals. Nonoc Island has one of the world's largest deposits of nickel. The smaller ones either rest on sand and gravel or have a limestone base bonded by boulders, reefs and sandbars. Some islets which include those in Del Carmen in Siargao Island are a cluster of rock formations jutting out from the sea covered with shrubs and coconut trees. 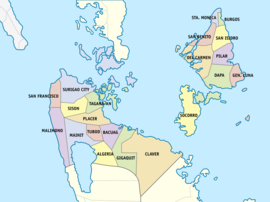 Surigao is home to the Mamanwa ethnic tribe. Their dances are showcased in a local festival called "Bonok-Bonok", held at the feast of San Nicolas de Tolentino which is held annually on September 10. The Bonok-Bonok depicts the native folks' merry-making to show gratitude to God for bountiful harvest and good health.

A collection of ancient archaeological diggings like burial coffins, jars and Chinese ceramics unearthed in Panhutungan, Placer is on public display at the Surigaonon Heritage Mini-Museum located at the Boulevard in Surigao City.

The inhabitants of the province is mostly of pure/mixed Austronesian stock, with some people of Chinese and Arab heritage. Spanish and American ancestries are also evident, albeit a minor percentage.

Some 95.80% of the people speak Surigaonon as a parent language.[citation needed] Cebuano and its dialect Boholano are also present. Waray is spoken by a small percentage. A majority are able to speak Tagalog and English as second languages. A small minority of the population are also speakers of Kamayo and Manobo languages.

The dominant religion is Roman Catholicism with 60 percent adherence.Template:Citation needed Other religions include Iglesia Filipina Independiente with 30 and 10 for Protestant Churches.

Coconut trees in the hills west of Tubod

Mangroves are the major vegetation in the coastal areas of the province, which form interminable marine forests covering 175 square kilometres (68 sq mi) along the coasts of the mainland and the islands of Siargao and Bucas Grande. The province is host to a variety of marine ecosystems like the lush seagrass beds and coral reefs which are relatively healthy and intact, supporting a rich diversity of marine flora and fauna.

Over 23 different species are caught the whole year round. Marlin, tuna, lapu-lapu, mollusks, crabs, even squids, stingrays and octopuses can be bought from fish vendors and fishermen.

The unique "magcono" (ironwood) forests of Surigao del Norte are one of the watersheds most productive resources. By its nature, it is slow growing and adapted to a mineralized soil.

Surigao City, the provincial capital, is dubbed as the "Gateway to Mindanao". The ferry landing terminal in Lipata links Mindanao to Luzon through Eastern Visayas. It annually showcases its distinct cultural heritage through the Bonok-Bonok Maradjao Karadjao Festival.

On the northern side of the province are Siargao and Bucas Grande Islands, known for their long stretch of sugar-fine beaches, vast mangrove forest, and deep waters teeming with marine life.

The Panhutongan and Amoslog archeological excavations in Placer would give a glimpse of the origins of the province and its people.