The name Sultan Kudarat given to the province was derived from the Muslim ruler, Sultan Muhammad Dipatuan Kudarat who begun to assert his leadership in the year 1619 and reigned in the Sultanate of Maguindanao from 1625 to 1671. Through his leadership, Spanish forces were successfully repelled from encroaching the Cotabato region of south-central Mindanao.[1] He is considered a national hero, and in his honor the province was named after him.

Sultan Kudarat was part of the former province of Cotabato, until its creation as an independent province (along with Maguindanao and North Cotabato) on November 22, 1973, through Presidential Decree No. 341.[2]

One notable event that took place in Sultan Kudarat was the Palimbang Massacre (also called the Malisbong Masjid Massacre), which saw the mass murder of Moro residents of Barrio Malisbong in Palimbang by units of the Philippine Military on September 24, 1974,[3][4]–1,500[3] two years after Ferdinand Marcos declared martial law. Accounts compiled by the Moro Women's Center in General Santos City state that 1,500 male Moros aged 11–70 were killed inside a mosque, 3,000 women and children aged 9–60 were detained – with the women being raped – and that 300 houses were razed by the government forces.[3]

Sultan Kudarat is situated on the southwestern section of central Mindanao. It is bounded on the north by the provinces of Maguindanao and North Cotabato; on the south by South Cotabato and Sarangani; on the east by Davao del Sur; and on the west by the Moro Gulf and the Celebes Sea. The province's total land area is 5,298.34 square kilometres (2,045.70 sq mi).

The Moro Gulf seen from Lebak

Two major mountain ranges encompass the province; the Alip Mountain Range in Columbio and the Daguma Mountain Range within the towns of Bagumbayan, Isulan and Esperanza.Template:Sfn The three coastal towns on the province's western side (Lebak, Kalamansig and Palimbang) are lined with mountain ranges that separate the central part of the province from the sea. There are also mountains on the eastern side, leaving flat land in between.Template:Sfn

The province has an irregular coastline of 132 kilometres (82 mi) in its three coastal towns, which face the Celebes Sea. These coastal areas are prone to tsunamis coming from the Celebes Sea. Approximately 2/3 of Lake Buluan's area is covered by the province in the towns of Lutayan and President Quirino. There are 7 major rivers within the province: Alip, Allah, Kapingkong, Tran, Salaman, Palimbang and Kabulnan. Additionally, there are 23 large creeks and 11 major springs within the province.

Land use and soil types

The climate of Sultan Kudarat falls under Type IV of Climate (characterized by rain showers or evenly distributed rainfall throughout the year). Heavy rainfall occurs from April to November. Unlike most other provinces in the country, Sultan Kudarat is generally free from typhoons as it is situated outside the "typhoon belt".

Tacurong City is the smallest unit in the province by land area, but is the most urbanized and is considered the province's commercial center. Other growth centers are Lebak and Isulan, the latter being the provincial capital. 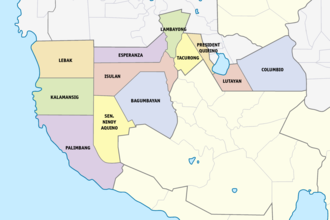 At the 2000 census, the province had a total population of 586,505 inhabitants, which grew to 747,087 in the 2010 census. About 113 ethnic groups were identified in the province in the 2000 Census. The Hiligaynons constitute the majority of the population, with Hiligaynon being the province's most widely spoken language. Other languages spoken in the province are Maguindanaon, Karay-a, Dulangan Manobo, Blaan, Teduray, Ilocano, and Cebuano. Tagalog and English are also widely understood and used in education, business, and administration as the national official languages.

Aside from the Hiligaynons, who settled in Sultan Kudarat around the 17th to 18th centuries along with the Karay-as, other ethnic groups in the province include the Maguindanaons (who constitute the majority of the provincial Muslim population), as well as the Manobos, Tedurays and Blaans, the three autochthonous ethnic groups of the province. Ilocanos and Cebuanos meanwhile are relative newcomers to the province, with the former comprising the majority of the population in the towns of Lambayong and President Quirino, and the latter in the town of Kalamansig.

The four major religious groups in Sultan Kudarat are Roman Catholicism (55.99%), Islam (29.48%), Evangelical (7.20%), and Iglesia ni Cristo (2.26%).Template:Sfn Other Christian groups constitute most of the remainders such as the Seventh-day Adventists, United Church of Christ in the Philippines, Jehovah's Witnesses, United Methodist Church, Southern Baptists, as well as "tribal religions".[5] In 2015 the Philippine Statistics Authority recorded Islam followed by 29.48% of the population.[6]

Aerial view of the western coast of the province

The economy of Sultan Kudarat is predominantly agricultural. The leading crops produced in the province are rice, corn, coconuts, coffee, bananas, mangoes, durians and African palm. The province is self-sufficient in poultry, swine and root crops, and is one of the few producers of Irish potatoes in the Philippines. The southern Philippines Grain Complex in Tacurong is the largest grains-processing complex in the country. There are more than 200 rice mills in the province.

Fishing is an industry in the three coastal towns of the province (Kalamansig, Lebak and Palimbang).Tuna caught along the coasts along the Celebes Sea are exported to Japan and Europe.

Other economic activities include cottage industries, which include crafts made of rattan and other types of wood.

For the school year 2009–2010, the province has 475 schools (401 public and 74 private), 368 of which were elementary schools, 90 were secondary, and 17 were tertiary. Sultan Kudarat State University is the only public tertiary school within the province, with its main campus at Tacurong City. Its other campuses are situated in Bagumbayan, Isulan, Kalamansig, Lutayan, Palimbang, and Senator Ninoy Aquino.

In 2010, Sultan Kudarat had 27 hospitals (5 government-owned, 22 private and 1 mobile hospital), which are classified into 17 primary (6-25 beds capacity), 8 secondary (25-100 beds capacity) and 2 tertiary (over 100 beds capacity). Tacurong had the most number of hospitals in the province with 11, followed by Isulan with 5.Template:Sfn

The following are the elected government officials and their years of tenure:

The former governors who have administered the province are:

Festivals celebrated within the province include: