The Spanish colonial period in the Philippines began after the Spanish navigator Miguel Lopez de Legazpi conquered Cebu in 1565, 44 years after the death of the Portuguese navigator Ferdinand Magellan. Initially intended as Spain’s stepping-stone to gain access to the spice trade in the Moluccas or Spice Islands, the country was eventually incorporated into the New Spain, which was an integral territorial entity of the Spanish Empire. The colonial period ended following the Philippine Revolution and Spanish-American War in which Spain ceded the Philippines to its new colonial master, the United States, for 20 million US dollars. 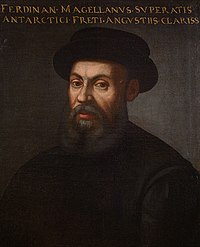 Ferdinand Magellan arrived in the Philippines in 1521.

Europeans first arrived in the Philippine Islands with the Spanish expedition led by Portuguese explorer Ferdinand Magellan on 16 March 1521 (17 March 1521 in real date, did not realize that they had crossed the International Date Line). Magellan landed on the island of Cebu, claiming the lands for Spain and naming them Islas de San Lazaro. He established friendly relations with some of the local chieftains and had a traditional rite of Kasing-kasing (Blood Compact/Sanduguan in native terms). Magellan was also able to convert some of them to Roman Catholicism, including leaders like Rajah Humabon of Cebu. However, Magellan was killed in a dispute with indigenous tribal groups led by a chieftain named Lapulapu of Mactan, who refused to accept his friendship. Many of Magellan’s men were killed and only a few managed to go to Moluccas. Only 18 men aboard a ship led by Juan Sebastian Elcano were able to return to Spain, completing the first circumnavigation of the world.

File:Statue of Lapu-Lapu in Mactan island, Philippines.jpg
A statue of Lapulapu marks the site where Magellan was purportedly killed in 1521.

Permanent Spanish settlement was not established until 1565 when an expedition led by the conquistadores Miguel López de Legazpi arrived in Cebu from Mexico (New Spain). Spanish leadership was soon established over many small independent communities that previously had known no central rule. Six years later, following the defeat of the local Muslim ruler Rajah Sulayman Legazpi established a capital at Manila. It was a location that offered the excellent harbor of Manila Bay, a large population, and proximity to the ample food supplies of the central Luzon rice lands. Manila became the center of Spanish government, including military, religious, and commercial activities in the islands. By the end of the 16th century, most of the coastal and lowland areas from Luzon to northern Mindanao were under Spanish control. The friars and soldiers were soon able to accomplish the normal conversion to Roman Catholicism of all the local people. However, the Muslims of Mindanao and Sulu, called “Moros” by the Spanish, were never completely subdued by Spain.

Despite the opposition of the Portuguese, who desired to maintain their monopoly on East Indies trade, the Spanish had secured a foothold in the Philippines, which became their outpost as the Spanish East Indies.

For the first 100 years, the Spanish rule in the Philippines was exercised in most areas through a type of tax farming known as the ‘’encomienda.’’ In this system, a Spanish ‘’encomendero’’ (a conquistador, soldier, official, or indio) who was granted a grant to exact tributes from the Indios or natives in exchange of the latter’s protection and introduction to the Christian faith. Although the encomienda did not include a grant of land, the system was abused by encomenderos who gained control of the lands inhabited and owned by the Indios, leading to some rebellion in other parts of the country. These issues caused the Spanish to abandon the system by the end of the 17th century. The

began to appoint his own civil and military governors to rule directly. The governor-general’s power was often likened to an independent monarch as he dominated the Audiencia (high court), was captain-general of the armed forces, and enjoyed the privilege of engaging in commerce for private profit. The famous Manila galleons sailed between Manila and the port of Acapulco in today's Mexico. These Manila galleons carried silver and other precious metals from the New World to Manila to purchase goods and raw materials from throughout Asia—for example, spices transshipped from the Spice Islands to the south, and porcelain, ivory, lacquerware, and processed silk cloth from China and Southeast Asia. While some of these Asian goods were used in Mexico, most of the cargo was transshipped across Mexico for delivery to Spain, to be sold in European markets. The Philippines was administered as a province of New Spain until Mexican War of Independence (1821).

Occupation of the islands was generally accomplished with relatively little bloodshed, partly because most of the population (except the Muslims) offered little armed resistance initially. A significant problem the Spanish faced was the subjugation of the Muslims of Mindanao and the Sulu Archipelago. The Muslims, in response to attacks on them from the Spanish and their native allies, raided areas of Luzon and the Visayas that were under Spanish colonial control. The Spanish conducted intermittent military campaigns against the Muslims, but without conclusive results until the middle of the 19th century.

One of Spain's objectives in colonizing the Philippines was the conversion of the local population to Roman Catholicism. The work of conversion was facilitated by the absence of other organized religions, except for Islam, which predominated in the south. The pageantry of the church had a wide appeal, reinforced by the incorporation of Filipino social customs into religious observances.

The eventual outcome was a new Roman Catholic majority of the main Austronesian lowland population, from which the Muslims of Mindanao and the upland tribal peoples of Luzon remained detached and alienated (such as the Ifugaos of the Cordillera region and the Mangyans of Mindoro).

Church and State were inseparably linked in Spanish policy, with the state assuming responsibility for religious establishments. However, while the governor-general was the civil head of the church, the archbishop vied with him for political supremacy. The archbishop, who also had the legal status of lieutenant governor, frequently won in the late 17th and 18th centuries. The religious orders acquired great wealth mostly in land. While royal grants and devises formed the core of their holdings, arbitrary extensions were made beyond the boundaries of original grants.

Also, the priests and friars had a command of local languages and they outnumbered civil officials in the provinces. They also tried to move all the people into pueblos or villages that surround the churches. However, the dispersed demographic patterns of old barangays persisted. The datu’s once hereditary position became subject to Spanish appointment.

At the lower levels of administration, the Spanish built on traditional village organization by co-opting local leaders. This system of indirect rule helped create a Filipino upper class, called the principalia, who had local wealth, high status, and other privileges. This perpetuated an oligarchic system of local control. Among the most significant changes under Spanish rule was that the Filipino idea of communal use and ownership of land was replaced with the concept of private ownership and the conferring of titles on members of the principalia.

The Philippines was not profitable as a colony, and a long war with the Dutch in the 17th century and intermittent conflict with the Muslims nearly bankrupted the colonial treasury. Colonial income derived mainly from entrepôt trade: The Manila Galleons sailing from Acapulco on the west coast of New Spain brought shipments of silver bullion and minted coin that were exchanged for return cargoes of Chinese goods. There was no direct trade with Spain.

Spanish rule on the Philippines was briefly interrupted in 1762, when British troops invaded and occupied the islands as a result of Spain's entry into the Seven Years' War. The Treaty of Paris of 1763 restored Spanish rule and in 1764 the British left the country fearing another costly war with Spain. The brief British occupation weakened Spain's grip on power and sparked rebellions and demands for independence.

The opening of the Suez Canal in 1869 cut travel time to Spain. In 1781, Governor-General José Basco y Vargas established the Economic Society of Friends of the Country. The Philippines by this time was administered directly from Spain. Developments in and out of the country helped bring new ideas to the Philippines. This prompted the rise of the ilustrados, an enlightened Filipino upper class, since many young Filipinos were able to study in Europe.

Enlightened by the Propaganda Movement to the injustices of the Spanish colonial government and the "frailocracy," the ilustrados originally clamored for adequate representation to the Spanish Cortes and later for independence. Jose Rizal, the most celebrated intellectual and radical illustrado of the era, wrote the novels Noli Me Tangere and El Filibusterismo, which greatly inspired the movement for independence. The Katipunan, a secret society whose primary purpose was that of overthrowing Spanish rule in the Philippines, was founded by Andres Bonifacio, who became its Supremo (leader).

An early flag of the Filipino revolutionaries

The Philippine Revolution began in 1896. Rizal was implicated in the outbreak of the revolution and executed for treason in 1896. The Katipunan in Cavite split into two groups, [[Magdiwang],] led by Mariano Alvarez (a relative of Bonifacio by marriage), and Magdalo, led by Emilio Aguinaldo. Leadership conflicts between Bonifacio and Aguinaldo culminated in the execution or assassination of the former by the latter's soldiers. With the revolution peaking, Aguinaldo agreed to a truce with the Spanish authorities through the Pact of Biak-na-Bato, which banished him and his fellow revolutionaries to Hong Kong.

A session of congress of the short-lived First Philippine Republic

The End of the Spanish Colonial Period

The Spanish-American War began in 1898 after the USS Maine (ACR-1), sent to Cuba in connection with an attempt to arrange a peaceful resolution between Cuban independence ambitions and Spanish colonialism, exploded and sank in Havana harbor. After Commodore George Dewey defeated the Spanish squadron at Manila, the US invited Aguinaldo to return to the Philippines, which he did on 19 May 1898, in the hope he would rally Filipinos against the Spanish colonial government. By the time US land forces arrived, the Filipinos had taken control of the entire island of Luzon, except for the walled city of Intramuros. On 12 June 1898, Aguinaldo declared the independence of the Philippines in Kawit, Cavite, establishing the First Philippine Republic under Asia's first democratic constitution.

Simultaneously, a German squadron arrived in Manila and declared that if the United States would not seize the Philippines as a colonial possession, Germany would. In the Battle of Manila in 1898, the United States captured the city from the Spanish. This battle marked an end of Filipino-American collaboration, as Filipino forces were prevented from entering the captured city of Manila, an action deeply resented by the Filipinos. Spain and the United States sent commissioners to Paris to draw up the terms of the Treaty of Paris which ended the Spanish-American War. The Filipino representative, Felipe Agoncillo, was excluded from sessions as the revolutionary government was not recognized by the family of nations. Although there was substantial domestic opposition, the United States decided neither to return the Philippines to Spain nor to allow Germany to annex the Philippines. In addition to Guam and Puerto Rico, Spain was forced in the negotiations to hand over the Philippines to the US in exchange for US$20,000,000.00, which the US later claimed to be a "gift" from Spain. This officially ended the Spanish hold of the Philippines. Meanwhile, the first Philippine Republic rebelled against the US occupation, resulting in the Philippine-American War (1899-1913).