The Smart Araneta Coliseum (formerly and also known as Araneta Coliseum) or The Big Dome, is an indoor multi-purpose sports arena that is part of the Araneta City in the Cubao area of Quezon City, Philippines. It is one of the largest indoor arenas in Asia, and it is also one of the largest clear span domes in the world. The dome measures approximately 108.0 meters (354.3 ft) making it the largest dome in Asia from its opening in 1960 until 2001 when it was surpassed by the Ōita Stadium in Japan with a dome measuring 274.0 meters (899.0 ft)..[1]

In 1952, J. Amado Araneta, a member of the Araneta family, purchased from Radio Corporation of America (RCA) Template:Convert of land in Cubao which includes the Araneta family home and is bounded by Epifanio Delos Santos Avenue or EDSA, Aurora Boulevard, P. Tuazon and 15th Avenue.

The Araneta Coliseum was constructed from 1957 to late 1959, and designed and built by Architect Dominador Lacson Lugtu and Engrineer Leonardo Onjunco Lugtu. From 1960 to 1963, the Coliseum received international recognition and was recognized as the largest covered coliseum in the world. Today, it remains one of the largest clear span domes in the world with a dome diameter of 108 meters. It occupies a total land area of almost 40,000 square meters (430,000 sq ft) and has a floor area of 23,000 square meters (250,000 sq ft).[4]

The coliseum opened on March 16, 1960, with Gabriel "Flash" Elorde boxing for the World Junior Lightweight crown against Harold Gomes. General admission then was 80 centavos and the reserve section was five pesos.

Among the notable events to take place at the arena were the 11th and 34th FAMAS Awards, the 1975 "Thrilla in Manila" boxing match between Muhammad Ali and Joe Frazier, in which the arena was renamed into the "Philippine Coliseum", and the annual Binibining Pilipinas beauty pageant. The Philippine Basketball Association (PBA) has played more than a thousand games at the Araneta Coliseum as of today. Other basketball events hosted by the arena were the 1978 FIBA World Championship, a game between the 1978 NBA champions Washington Bullets and a PBA selection in 1979, and the 1982 Asian Youth Basketball Championship where the Philippines defeated China in the final.[5]

Araneta Coliseum logo from 1999 to 2011 prior to naming rights deal with Smart Communications.

In the third quarter of 1998, the Aranetas and Pilipinas Shell (local arm of Royal Dutch Shell) started negotiations for a naming rights deal that would have lasted until 2008. The Aranetas, who wanted to retain their name at the arena rejected the proposed name "Shell Coliseum at the Araneta Center". Instead, the parties agreed on a contract where Shell's name and logo will be painted at the arena's basketball court, a move that was almost shelved due to objections from other PBA teams because Shell owned the then-PBA team, the Shell Turbo Chargers.[6]

In 1999, the coliseum underwent its first major renovation at the cost of ₱200 million.[7] The major changes include the renovation of the lower box area, replacement of seats for the patron and lower box sections, and installation of a four-sided center-hung scoreboard. The section names were also given numerical designations: 100 for Patron section, 200 for Lower Box, 300 for Upper Box A, and 400 for Upper Box B. In 2006, a LED display was added to the scoreboard.

From 2001 to 2008, the highest-grossing event at the arena is the Pacquiao vs. Larios boxing fight between Manny Pacquiao and Óscar Larios, earning 96.2 million Philippine pesos. A concert by Westlife was attended by 17,887 people and earned ₱18.5 million, while a Cliff Richard concert earned ₱17.2 million despite being watched by 5,647 spectators.[5]

Prior to the Ultimate All-Star Weekend in July 2011, it was announced that the Aranetas entered into a naming rights deal with mobile network operator Smart Communications, Inc. (a subsidiary of Philippine Long Distance Telephone Company), renaming the arena into "Smart Araneta Coliseum". The 5-year naming rights deal includes improvements and renovations to the arena such as the installation of curved escalators to improve access in the upper box and general admission areas (the plan was subsequently cancelled due to undisclosed reasons), and the construction of a parking lot that can accommodate up to 2,000 cars. The overall renovation project of the coliseum costed ₱1 billion.[6]

On January 7, 2015, the Hydra-Rib basketball backboards first used in 1995 were replaced with Spalding ones. The backboards were first used in Game 1 of the 2014–15 PBA Philippine Cup Finals.

On June 9, 2017, the OES SHOTS-14G7 shot clocks were replaced with TAG Heuer models, following the collaboration of the PBA with the latter company in the previous year.[9] The clocks were first used in Game 3 of the 2017 PBA Commissioner's Cup Quarterfinals match between the TNT Katropa and Meralco Bolts.

On May 15, 2021, The Coliseum was used as a Mega Vaccination Center for the rollout of the Quezon City Vaccination Drive against the COVID-19 pandemic, capable of vaccinating 1,000 to 1,500 people daily. The vaccination center is also one of the largest vaccination sites in the country, following the opening of The Galeón vaccination center, located at the SM Mall of Asia in Pasay City.[10][11] 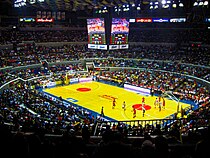 The Araneta Coliseum with the "Big Cube" LED display during a PBA game between the San Miguel Beermen and Barangay Ginebra Kings in 2011. This photo was taken before the naming rights with Smart Communications took effect.

The facility has also hosted the 1975 Thrilla in Manila, 1978 FIBA World Championship, the 2007 Philippines World Pool Championship and the 2017 SEABA Championship.

The coliseum will also be one of the venues for the upcoming 2023 FIBA Basketball World Cup.[12]

To date, TNT BOYS are the youngest performers to stage a concert in the coliseum at the age of 12, 13 and 14 with their Listen: The Big Shot Concert held on November 30, 2018.

Eat Bulaga!, the longest running noontime show of the Philippines, also used the coliseum for some special events such as its TV special Eat... Bulaga!: Moving On on February 18, 1989 and its 10th anniversary on September 23, 1989 in ABS-CBN and Eat...Bulaga!: The Moving held on January 28, 1995 on its new home, GMA Network.

The coliseum has hosted the Binibining Pilipinas pageants annually. From 1990 until 2016, the coliseum hosted Disney on Ice productions during the holiday season; in 2016, the Mall of Asia Arena in Pasay began hosting these productions.[13]

At the turn of the new millennium, Regine Velasquez held her iconic two-night sold-out concert entitled R2K: The Concert, in support of her album R2K, on April 7 and 8, 2000. R2K The Concert which became the most attended concert at the coliseum with over 37,000 attendees, was center staged and has used the seating capacity to its 360-degree maximum.

The coliseum also housed K-pop artists like Super Junior's Super Show-the first Korean to perform in the arena, 2NE1, SS501, CNBLUE, Beast and EXO.[24][25] K-Pop group U-KISS also had their concert at the big dome and later released into a concert DVD dubbed as U-KISS 1st Kiss Tour in Manila DVD.[26] It was the first time that an international artist released a concert DVD featuring the coliseum. GOT7's first fan meeting in Manila was also held in the Coliseum last November 14, 2015.

On April 14, 2018, Sarah Geronimo held her 15th anniversary concert called "This Is Me" stylized as "This 15 Me" at the Araneta Coliseum. The sold-out concert was reported as the "Highest Grossing Local Concert of All-time." The concert's official hashtag was also the number one trending topic on Twitter Philippines on the day of the concert with over 200,000 tweets. Netflix acquired the rights to stream the concert film starting in August 2019 making Geronimo the first Southeast Asian artist to have a concert film on the said platform.

On October 12, 2014, the main celebration of the 75th Diamond Anniversary of Quezon City was held at the coliseum.[27]

The Coliseum is also the home to the annual ABS-CBN Christmas Special, which is typically held during the early weekdays of the second week of December.

Filipina girl group DIVAS, which is composed of Kyla, Yeng Constantino, KZ Tandingan and Angeline Quinto staged two concerts at the Araneta, their first concert titled DIVAS Live in Manila, and another one in 2018 with Boyz II Men titled Boyz II Men with DIVAS.

However, as the coronavirus pandemic continued to rage across the country, events across the Araneta were postponed/cancelled to prevent further spread of the disease. The venue later resumed hosting events through the 6th Wish 107.5 Music Awards. However, due to the protocols imposed by the Inter-Agency Task Force on Emerging Infectious Diseases, the event was held without any live audience.

Religious services and other uses 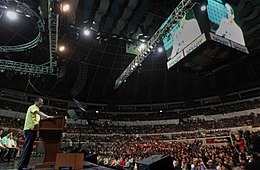 The Big Dome is also the venues of religious gatherings like the anniversary celebration of Ang Dating Daan (English: The Old Path, the flagship program of the Members Church of God International), Christ's Commission Fellowship, Iglesia ni Cristo, International Convention of Pentecostal Missionary Church of Christ (4th Watch), The Church of Jesus Christ of Latter-day Saints in the Philippines, Jesus Is Lord Church Worldwide, Jesus Miracle Crusade, Kingdom of Jesus Christ: The Name Above Every Name (during early years), Shalom CCFI (Every Holy Week), the Special Assembly of Jehovah's Witnesses and Victory Christian Fellowship,[36] and different talent search finales, like Pinoy Big Brother, Pilipinas Got Talent, Philippine Idol, Starstruck, and Artista Academy (which held its one-time grand audition[37] at the coliseum).[38][39][40]

On October 1, 1975, when the Thrilla in Manila took place, the Coliseum was filled with more than 50,000 people despite the hot & humid temperatures, and breaching the total design capacity back then of the Coliseum, consisting of over 36,000 people.[41] On October 15, 2014, the third game of the UAAP Season 77 Men's Basketball Tournament Finals Series between the FEU Tamaraws and NU Bulldogs set the all-time basketball attendance record of 25,138 which broke the previous record last October 8, 2014, the second game of the series (one week before the third game) attendance of 24,896.[42] For the PBA, On February 12, 2014, the seventh game of the 2013–14 PBA Philippine Cup Semifinals series between Barangay Ginebra San Miguel and San Mig Super Coffee Mixers set the record of 24,883.[43]