Sibuyan has been dubbed by some local and international natural scientists as "the Galápagos of Asia", because it has remained in isolation from the rest of the world since its formation. Never in its geological history has it ever been connected with any part of the Philippine archipelago. Seismic forces pushed up a Template:Convert peak from the earth’s crust, forming a series of smaller peaks and slopes. The peak is Mt. Guiting-Guiting (literally means "the saw-toothed mountain", in reference to its jagged ridge). Because of the steep slopes, much of its original forest remains untouched, and the rest is the island as we find it today.

Primary forests cover Template:Convert, which is 33% of the land area of Sibuyan. However, most of the lower altitude forest has been logged or is secondary. Mt. Guiting-guiting Natural Park (equivalent to the IUCN category of National Park) was established to protect these forests, which are mainly in the centre and north of the island, and covers an area of Template:Convert out of Sibuyan’s total area of Template:Convert. The park features a scenic landscape with twin towering peaks set amidst closed canopy forests. Its forests remain largely intact, and include the entire elevational gradient from lowland dipterocarp forest (at 200 to 900 m) and mangroves, through montane forest (above 700 m) to mossy forest, heathland and montane grassland around the peaks. 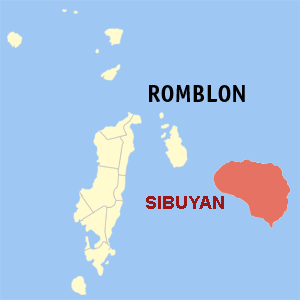 The island is shared by three municipalities; Cajidiocan, Magdiwang, and San Fernando. 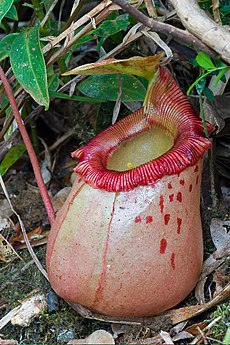 Sibuyan has a rich biodiversity of flora and fauna which are threatened by an emerging aggressive promotion of mining industry by the country's government. Exact figures on numbers of total plant species are hard to give, as biologists stumble upon species yet unidentified by the scientific community. In one study, the National Museum identified 1,551 trees in a single hectare, with 123 species of trees, and of this number, 54 are found nowhere else in the world. Hence, it has been proclaimed as one of the world’s most diverse and dense forests.[1] There are estimated to be 700 vascular plant species on the island. Nepenthes sibuyanensis, a pitcher plant species, is also endemic as its scientific name suggests. There are 131 species of birds and ten species of fruit bats, and many dwelling mammals, reptiles, and rodents yet to be fully catalogued. Three birds subspecies are endemic to Sibuyan: the Philippine hanging parrot (Loriculus philippensis bournsi), the Philippine Pygmy-woodpecker (Dendrocopos maculatus menagei), and the Orange-bellied Flowerpecker (Dicaeum trigonostigma sibuyanicum), all of which were recorded there in the early 1990s. Five species of threatened mammals, one fruit bat and four rodents, are endemic to Sibuyan, and the endangered fruit bat Nyctimene rabori occurs there.

Sibuyan Island has been said to be one of the most unspoiled ecosystems in the Philippines and the world.[2] The water of the Cantingas River as well as most of the other smaller rivers and rivulets on the island was tested to be one of the best water quality for human consumption worldwide. The drinking water of Sibuyanons come direct and untreated from rivers, springs and holes drilled at mountain slopes or from the ground. The Sibuyanons Against Mining advocacy group, with the Sibuyan Island Sentinels League for Environment Inc. (Sibuyan ISLE),[3] has been fighting for the conservation and protection of the island against mining activities considering its vast impact on the ecology, culture and society of the island.

On June 21, 2008, the passenger ferry MV Princess of the Stars of Sulpicio Lines (now Philippine Span Asia Carrier Corp.) capsized off the coast of the island. The vessel was sailing through the Sibuyan Strait from Manila en route to Cebu City in the height of Typhoon Frank. That accident have caused the death of hundreds of people.