Sarangani (Cebuano: Lalawigan sa Sarangani; Hiligaynon: Kapuoran sang Sarangani; Ilocano: Probinsia ti Sarangani; Filipino: Lalawigan ng Sarangani) is a province in the Philippines located in the Soccsksargen region. Its capital is Alabel. With a 230-kilometre (140 mi) coastline along the Sarangani Bay and Celebes Sea, the province is at the southernmost tip of Mindanao island, and borders South Cotabato and Davao del Sur to the north, Davao Occidental to the east, and the Celebes Sea to the south.

Sarangani is part of the South Cotabato-Cotabato-Sultan Kudarat-Sarangani-General Santos (Soccsksargen) development cluster, and is linked by paved roads to the international airport and harbor of General Santos.

The province is divided into two sections, separated by the Sarangani Bay and city of General Santos, and it used to be part of South Cotabato until it was made an independent province in 1992.[1]

The earliest civilization in the province can be found in Maitum, Sarangani, where the Maitum Anthropomorphic Pottery or Maitum Jars were found. The jars have been dated to approximately 5 BC to 370 AD, one of the oldest in the entire Southeast Asian region and the Philippines. The discovery testified to the long history of cultural exchanges in Sarangani and its people.

The island of Sarangani (now part of Davao Occidental) was named by Spanish explorer Ruy López de Villalobos in 1543 as Antonia, in honor of Antonio de Mendoza y Pacheco who commissioned the Villalobos expedition to the Philippines. The early inhabitants who first inhabited Sarangani were the indigenous natives, called MunaTo, a native term for "first people."[2] 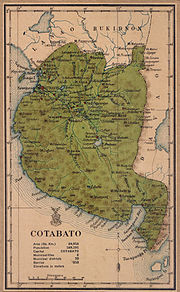 Sarangani covers a total area of 3,601.25 square kilometres (1,390.45 sq mi) occupying the southern tip of the Soccsksargen in central Mindanao. The province is bordered on the central-north by South Cotabato, northeast by Davao del Sur, east by Davao Occidental, south by the Sarangani Bay and Celebes Sea, and northwest by Sultan Kudarat.

Western coast of the province at Maitum

Sarangani is divided into two (eastern and western) sections, separated by the Sarangani Bay and General Santos in the middle. The western portion comprises the towns of Maitum, Kiamba, and Maasim, and is bounded on the north by South Cotabato and on the northwest by Sultan Kudarat. The eastern section consists of Alabel, Glan, Malapatan, and Malungon. 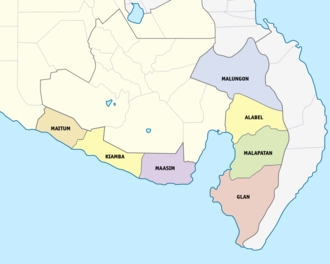 Christianity is the majority religion in the province with a total of 79% (48% Roman Catholicism [3] and 31% evangelicals).[4] Other religious minorities are Islam (9%)[5] and Iglesia ni Cristo (2%).[6] The remainder is usually divided among other Christian churches.

Coconut, corn, rice, banana, mango, durian, rubber, and sugarcane are major crops now being planted by the inhabitants. The province has plantations (mango, banana, pineapple, asparagus), cattle ranches, and commercial fishponds that have been operating in the area, some of which having existed as far back as 40 years.

Electricity comes from the National Power Corporation, and augmented by a 50 MW power plant in Alabel, the province's capital. Water is provided for by sustainable spring development projects.

Sarangani has ancient burial jars, discovered by archaeologists from the National Museum in Ayub Cave in Maitum, in 1991 and in 2008, and at Sagel Cave in Maitum (now declared by National Historical Institute as a national historical site). Amid Mindanao's armed conflicts, artifacts found thereat prove settlements of pre-historic civilization in Maitum.[7][8]