Formerly known as Pueblo de Carig during the time of the Spanish, it is located between southwestern part of Isabela and northwestern boundary of Quirino in Northeastern Luzon island of the Philippines.[1] It is the gateway to the vast plains of Cagayan Valley.

Santiago is situated Template:Convert north of Metro Manila. The city sits on a vast area of predominantly flat and fertile land in the Cagayan Valley, surrounded by the Caraballo Mountains to the south, the Great Sierra Madre to the east and the Cordillera Mountain Range to the west alongside the Magat River.

Though statistically grouped by the Philippine Statistics Authority and geographically located within the boundaries of the province of Template:PH wikidata, as well as part of the province's 4th District, Santiago City is administratively and legally independent from the province as stated in Section 25 of the LGC.[2]

The origin of Santiago City can be drawn from the first native settlement discovered by the early Spanish missionaries at the bank of the old Carig River (now Diadi River) from which its original name, Carig, was derived. The early inhabitants were the Gaddangs and the Ibanags. When the Spanish settled in, the city was named Pueblo of Santiago Apostol de Carig, with Santiago as the Spanish name of Saint James the Apostle. In the early 1950s, the Municipal President Vicente Carreon changed the name to simply Santiago. Santiago remained a municipality for 84 years.

Santiago was originally a part of the province Cagayan (comprising the whole Cagayan Valley region), which was reorganized as a political subdivision in 1583 with Nueva Segovia as its capital. On May 1, 1856, when the province of Isabela was carved out by a Royal Decree, Santiago was among the towns relinquished to the newly created province. The first five barrios after the Cadastral survey in 1927 were Patul, Batal, Nabbuan, Buenavista and Dubinan.

It was said that there were only about three Filipino-owned sari-sari stores in Santiago in 1917. The settlers acquired most of their merchandise and other provisions from Chinese traders in Echague, the landing zone for products intended for Santiago and other towns, owing to its proximity to the Cagayan River.

It was when the Villa-Verde Trail was opened when things were set in motion. It facilitated the entry of immigrants from various provinces in Luzon to the Cagayan Valley and Santiago absorbed a sizable share of these travelers. The new route served as an impetus for growth and introduced new technologies and business opportunities, and made Santiago a melting pot of different cultures.

In 1942, during World War II, the Japanese forces entered and occupied the town of Santiago. In 1945, the town was liberated by the Filipino soldiers of the 1st, 2nd, 12th, 13th and 15th Infantry Division and the USAFIP-NL 11th Infantry Regiment of the Philippine Commonwealth Army, the 1st Constabulary Regiment of the Philippine Constabulary and the recognized guerrilla fighter units.

Santiago survived through world wars, although badly damaged, and from then on developed to become the leading trading and commercial city in Cagayan Valley.

On December 17, 1993, the bill converting Santiago into an independent component city was approved by the Lower House spearheaded by the then Mayor Jose "Pempe" Miranda. In the following year, the Senate Committee on Local Government approved another public hearing dated February 23, 1994.

On May 5, 1994, President Fidel V. Ramos signed Republic Act 7720, making Santiago as the first city in Cagayan Valley and 5th independent component city, after Cotabato City, Dagupan, Naga, and Ormoc. The plebiscite was held on July 6, 1994, showed that voters approved this conversion.

On February 14, 1998, Republic Act 8528 repealed this statute transforming it to a component city. It was not until December 29, 1999, when the Supreme Court contested the validity of the latter decision and favored Santiago to be once again an independent component city.

The total land area the city is 80% flat or nearly level land in the portions of northwestern, eastern and western parts of the city. While adjacent areas have gently undulating and moderately rolling areas, and the remaining areas constitute steeply undulating and rolling lands. The Dariuk Hills is the highest point in the city.

The dominant religion in the city is Roman Catholic (Saint James the Apostle Parish in Barangay Centro West and Saint Francis of Assisi Parish in Barangay Rizal). However, other Christian sectors are also present in Santiago such as Iglesia ni Cristo, United Methodist Church, Pentecostal Missionary Church of Christ (4th Watch), Jesus is Lord Church, Christ the Rock Church and The Church of Jesus Christ of Latter-day Saints. Being a hurried district full of different cultures, such as Indians, Muslim, and Chinese, several religious groups have also opened their places of worship to the public, such as Chinese Temple, the Muslim Mosque, and the Sikh Temple. 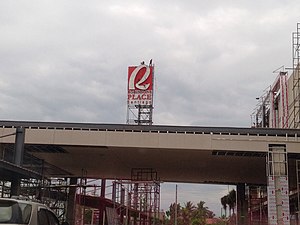 Robinsons Place Santiago as of January 18, 2014

Home of several business enterprises, banking institutions, educational entities, as well as manufacturing companies, Santiago City is considered the Commercial and Trading Center of Cagayan Valley and tagged as the Investment Hub of the North.[3]

Robinsons Land Corporation has launched Robinsons Place Santiago as its pioneer mall in Cagayan Valley. Vista Land and Lifescapes, Inc. built its first horizontal subdivision in the Valley with Camella Isabela Communities, Inc. In 2013, it launched another project named Camella Santiago. In 2018, Camella Santiago expanded and named as Camella Santiago Trails. It is building its banner mall in the Cagayan Valley Region, the Vista Mall Santiago. Another multi-national real estate developer will soon be built its prime subdivision, Primeworld Suburb, owned by Primeworld land holdings Company. The head-office of Grupo Marilens, the largest homegrown corporation in the region, is in Santiago City. Aljay, an agri-chemical company, has a presence in the city and has a manufacturing plant for agrichemical, fertilizer and feeds supply for poultry and piggery and the only manufacturing plant for fertilizer and agrichemical in the region. Three of the biggest TV networks in the country (i.e. ABS-CBN, GMA7, TV5) stationed their regional networks and relay stations in the city. San Miguel Corp., Pepsi Cola, Purefoods, Digitel and PLDT also operate in the city while different car companies abound(i.e. Mitsubishi, Nissan, Hyundai, KIA, Ford, Chevrolet, Peugeot, Foton, Mahindra and other car companies as well as Yamaha and Honda Motors). The National Food Authority competes with local traders to stabilize prices.

Based on the 2016 City Competitiveness Index, Santiago is the fastest growing local economy in the entire Philippines and is now ranked 51 in terms of economy size among all cities in the country.

Despite rapid industrialization, agriculture is still the main source of livelihood. The main crops are rice, corn, and high-value fruits and vegetables. The city is where imposing grain stations can be found. Rice mills abound. It is the pivotal place for crops where harvests from Ifugao, Kalinga, Quirino, Nueva Vizcaya, and parts of Isabela are transported either to Nueva Ecija, Bulacan, Pangasinan or Batangas. In addition to the city's product is muscovado sugar which the local government has been promoting for export.

During the Miranda Flagship, the city Government adopted the parental AxR Hybrid rice seed production as its flagship program for agriculture, which produces the offspring F1 Hybrid rice seed. This rice variety makes a phenomenal yield of 249 per ha. doubling the income of Santiago City farmers per cropping, and is expected to bring Santiago City over 2 billion in income and also additional taxes of 17 million and the national government of 33 million per year.

After the previous leadership, The Navarro Administration added more life in culture and strengthen the livelihood of the people. The Navarros' spearheaded a unique program for farmers in planting on mid-summer and harvest by early September side by side in focusing on high-value fruits.

The city is governed by a mayor-council system. There are ten city councilors. The council is the official governing body of the city, also known as the Sanguniang Panglungsod. The council agenda is presided over by the city vice mayor. Being an independent-component city with its own charter, the city is not subject to the jurisdiction of Isabela province, of which it is geographically a part. It is however represented in the Philippine Congress as part of Isabela's 4th legislative district. No native was ever elected mayor of Santiago since the Philippine became a Commonwealth and Republic. 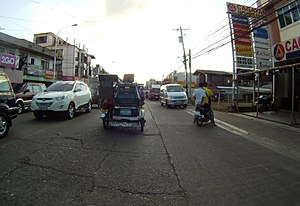 The majority of the population speaks Tagalog and Ilocano. English is the medium of instruction in schools and is generally understood and spoken especially in the business community.

Tourism is a new industry in the city. Serving as the jump-off point in northeastern Luzon for tourists, many landmarks are developed. Tourist spots near Santiago are Quirino Province, Magat Dam in Isabela, Banaue Rice Terraces in Cordillera, and white sand beaches in Aurora Province facing the Pacific Ocean.

Santiago City is the gateway to the plains of Cagayan Valley. It connects several provinces with the following major roads crossing the city:

The Integrated Transport Terminal and Commercial Complex has also been established to cater for all public utility jeepneys, buses, and vans that operate from nearby provinces and localities to the city. Additional to city transport is the taxi, first in the city and whole Region 2.