Santiago (Portuguese for “Saint James”) is the largest island of Cape Verde, its most important agricultural centre and home to half the nation's population. Part of the Sotavento Islands, it lies between the islands of Maio and Fogo. It was the first of the islands to be settled: the town of Ribeira Grande (now Cidade Velha) was founded in 1462. Santiago is home to the nation's capital city of Praia. 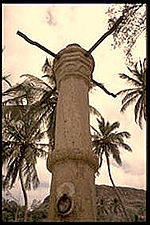 The pillory in Cidade Velha.

The Serra Malagueta mountain range in the northern part of the island of Santiago, Cape Verde 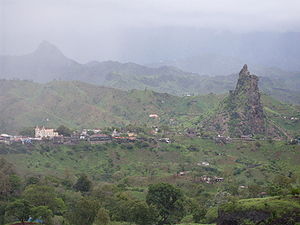 Santiago island. The wetter climate of the interior and the eastern coast contrasts with the dryer one in the south/southwest coast

The eastern side of the nearby island of Fogo collapsed into the ocean 73,000 years ago, creating a tsunami 170 meters high which struck Santiago.

In 1460, António de Noli became the first European to visit the island and meet its inhabitants. Da Noli settled at Ribeira Grande (now Cidade Velha) with his family members and Portuguese from Algarve and Alentejo in 1462. Transcontinental slavery made Cidade Velha the second richest city in the Portuguese realm. The wealth of Ribeira Grande and conflicts between Portugal and rival colonial powers France and Britain attracted pirate attacks, including those by Francis Drake (1585) and Jacques Cassard (1712).[1]Template:Rp Ribeira Grande went into decline, and the capital was moved to Praia in 1770.[2]

Cessation in the slave trade in the 19th century resulted in an economic crisis, and the growing port of Mindelo on São Vicente replaced Praia as the most important port. With few natural resources and inadequate sustainable investment from the Portuguese, the citizens grew increasingly discontented with the colonial masters, who nevertheless refused to provide the local authorities with more autonomy. The island's native population was disadvantaged by the Portuguese colonial system and supported Amílcar Cabral and the African Party for the Independence of Guinea and Cape Verde and the independence of 1975.

Santiago is the largest island of Cape Verde, with an area of 991 square kilometres (383 square miles). It is 54.9 km long and 28.8 km wide.[3] The island is mountainous, although slightly flatter in the southeast. The interior and the east coast are seasonally, and somewhat sporadically, hot tropical in climate and forested, whereas the south and southwest occupy the central uplands' arid rain shadow.

The tallest summit is Pico de Antónia, elevation 1,392 m (4,567 ft), barely west of Picos, in the centre of the island. The second is Serra Malagueta between Assomada and Tarrafal in the north. Other mountain ranges include Órgãos in the municipality of São Lourenço dos Órgãos and Monte das Vacas near Praia.

Santiago's west coast is rugged, especially at Baía do Inferno, and less populated than the east and south coasts. The most important rivers are Ribeira Seca, Ribeira Grande de Santiago, Ribeira Principal and Ribeira da Trindade. The southernmost point is Ponta Temerosa and the northernmost, Ponta Moreia.[3]

The Cape Verde islands are very naturally degraded. Due to their proximity to the Sahara, most are dry, but on those with high mountains and farther away from the continent, by orography (relief precipitation), the humidity is much higher, giving small upland rainforest habitats, but strongly affected by human presence. Northeastern slopes of high mountains receive heavy rain several times most years. Much of the altitude is sufficient for a mild climate and subject-to-seasonal-drought but typically moist soil. Some islands, as on Santiago, have vegetation-clad (cloud forests) where the dense moisture condenses and soaks the plants, and soil.

Praia, located in the southeast coast, is the largest city on the island, and also the largest city and capital of the country. Other towns on the island include Cidade Velha, west of Praia, Cape Verde's first capital; Assomada, in the centre of the island; Tarrafal in the north; Pedra Badejo and Calheta de São Miguel along the east coast.

The main port of Santiago is Praia Harbor, in Praia. It is the second busiest port in Cape Verde, after Porto Grande Bay on São Vicente, with 817,845 metric tonnes of cargo and 85,518 passengers handled in 2017.[12] There are ferry connections from Praia Harbor to the islands of Brava, Fogo, São Nicolau, São Vicente, Maio, Boa Vista and Sal.[13] There are several small fishing ports along the coast, including Tarrafal, Cidade Velha, Pedra Badejo and Calheta de São Miguel.

Public transport within the city of Praia is provided by the city buses of the company SolAtlântico. Intercity public transport is provided by share taxis and minibuses. In 2015 a project called EcobusCV started running a fleet of dual fuel waste vegetable oil / diesel minibuses between Praia and Assomada. However, services were suspended in November 2016.[18]

The main industries are agriculture, tourism, fishing and others, alongside some manufacturing. Main agricultural products are corn, sugarcane, banana, coffee and mangoes.Template:Citation needed

Santiago has the most diverse flora and fauna of all Cape Verde: it has 1,915 identified land species, of which 289 are endemic.[20] It is also the most forested island of Cape Verde: 38% of its area is forest.[20] The only protected areas of the island are the Natural Parks of Serra do Pico de Antónia and Serra Malagueta,[21] covering 3.68% of the island. [20]

Several sports are practiced on Santiago, including football (soccer), basketball, volleyball, track and field, futsal and athletics. There are two football associations on the island: Santiago North and Santiago South, each with its own competitions. Santiago possesses the most major sports complexes in the country, they include Estádio da Várzea in Praia, Cumbém in Assomada, Mangue in Tarrafal, one in Pedra Badejo and Estádio da Calheta in Calheta de São Miguel.