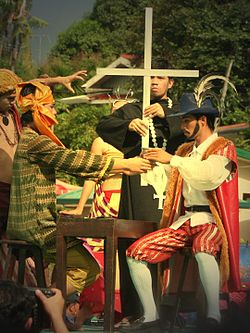 The Sandugo Festival is an annual historical celebration that takes place every year in Tagbilaran City on the island of Bohol in the Philippines. This festival commemorates the Treaty of Friendship between Datu Sikatuna, a chieftain in Bohol, and Spanish conquistador Miguel López de Legazpi. This 16th-century peace treaty occurred on March 16, 1565 through a blood compact or "sandugo".[1][2]

The Sandugo Festival is held every July. The Tagbilaran City Charter Day on July 1 kicks-off the month-long festival with a holy mass, diana, motorcade and program sponsored by the City Government of Tagbilaran. Among the major activities during the month is the Miss Bohol Sandugo Beauty Pageant, and the Sandugo Street Dancing Competition which is usually held on the 3rd or 4th Sunday of July, and organized by the Bohol Sandugo Foundation, Inc. (BSFI). 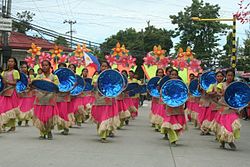 In 2010, the Street Dancing Competition will be held on July 25. The competition is usually participated in by schools, the city and municipal governments, boholano organizations abroad, and even contingents from other provinces. The competition starts at noon at the City Pier, passes through the city's major streets, and culminates at the Pres. Carlos P. Garcia Sports Complex where a Sandugo Re-enactment is held. The final judging of the competition will be held at the Complex where the participants will again perform for the audience. The winners receive thousands of pesos in prizes.

Aside from the activities organized by the city and provincial governments and by the BSFI, are other activities sponsored by various private sectors like nightly shows and trade/food fair at the City Pier, product showcase, concerts, medical and surgical missions, and others.

Due to the inadequate support coming from both government and private sectors coupled with the dwindling public interest in the yearly celebration of the Sandugo Festival, the Bohol Sandugo Foundation, Inc. (BSFI) was organized in 1991. Since then, the BSFI has ably spearheaded the celebration of the Sandugo and has made significant efforts in reviving a nationwide interest in the event which has now become a magnetic byword in the tourism industry.[3]

Every two years, the "Tigum Bol-anon Sa Tibuok Kalibutan" (English: A Gathering of Boholanos Around the World) or TBTK is held in unison with the Sandugo Festival. This gathering is organized by the Confederation of Boholanos in the US and Canada or CONBUSAC, which aims to gather Boholanos from all over for a celebration of unity. Among the activities conducted by the TBTK is the Search for Mrs. Bohol International and Miss Bohol International, CONBUSAC Convention, Awarding of Outstanding Boholanos, medical and surgical missions (in cooperation with the BSFI), and others.

The 2010 theme is "Sandugo at 22: Onward for Unity and Progress". The schedule of events are as follows: