San Agustin Church (Filipino: Simbahan ng San Agustin, Spanish: Iglesia de San Agustín), also known as the Archdiocesan Shrine of Nuestra Señora de Consolación y Correa or the Immaculate Conception Parish, is a Roman Catholic church under the auspices of the Order of St. Augustine, located inside the historic walled city of Intramuros in Manila. Completed in 1607, it is the oldest stone church in the country.[1]

In 1993, San Agustin Church was one of four Philippine churches constructed during the Spanish colonial period to be designated as a World Heritage Site by UNESCO, under the collective title Baroque Churches of the Philippines.[2] It was named a National Historical Landmark by the Philippine government in 1976.[3] 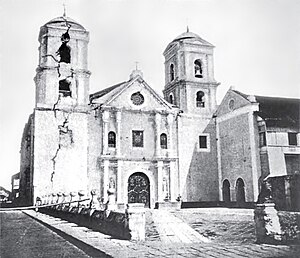 San Agustin Church after the 1880 earthquake

San Agustin Church is located in General Luna St,, Manila, Metro Manila. The present structure is actually the third Augustinian church erected on the site.[4] The first San Agustin Church was the first religious structure constructed by the Spaniards on the island of Luzon.[5] Made of bamboo and nipa, it was completed in 1571, but destroyed by fire in December 1574 during the attempted invasion of Manila by the forces of Limahong.[6][7] A second wooden structure built on the same site[7] was destroyed in February 1583 by a fire that started when a candle ignited drapery on the funeral bier during services for Spanish Governor-General Gonzalo Ronquillo de Peñalosa.[6]

The Augustinians decided to rebuild the church using stone, and to construct an adjacent monastery. Construction began in 1586, based on a design by Juan Macías.[5][7] The structure was built using hewn adobe stones quarried from Meycauayan, Binangonan and San Mateo, Rizal.[3] The work proceeded slowly due to the lack of funds and materials, as well as the relative scarcity of stone artisans.[7] The monastery was operational by 1604, and the church was formally declared complete on 19 January 1607 and named Church of St. Paul of Manila.[7] Macías, who had died before the completion of the church, was officially acknowledged by the Augustinians as the builder of the edifice.[8]

San Agustin Church was looted by the British forces who occupied Manila in 1762 during the Seven Years' War.[9] In 1854, the church was renovated under the supervision of architect Luciano Oliver.[5] On 3 June 1863, the strongest earthquake at that time hit Manila leaving widespread destruction to the city, with San Agustin Church the only public building left undamaged.[10] A series of strong earthquakes struck Manila again on 18–20 July 1880. This time, the tremors left a large crack in the east bell tower.[11] The crack was eventually repaired, but the left tower was permanently removed with only the base remaining today.[12] The church withstood the other major earthquakes that struck Manila before in 1645, 1699, 1754, 1796, 1825, 1852, 1863 and 1880 and served as a hospital for several of those injured during the earthquake in 1863.[13]

On 18 August 1898, the church was the site where Spanish Governor-General Fermin Jaudenes prepared the terms for the surrender of Manila to the United States of America following the Spanish–American War.[4][9]

During the Japanese occupation of World War II, San Agustin Church became a concentration camp.[4] In the final days of the Battle of Manila, hundreds of Intramuros residents and clergy were held hostage in the church by Japanese soldiers with many hostages killed during the three-week-long battle.[4] It was the only one among seven churches of Intramuros to survive a leveling by combined American and Filipino ground forces in May 1945.[4] While the church sustained damage to its roof, the adjacent monastery was completely destroyed. In the 1970s the monastery was rebuilt as a museum under the design of architect Angel Nakpil.[3][9] The church was renovated in 2013, with its colorful facade replaced by a sedate stone-colored one.

San Agustin Church and its adjacent convent, Convento de San Agustin, served as the provincial house and headquarters of the Augustinian Province of the Most Holy Name of Jesus of the Philippines of Spain ever since the province's founding in 1575 until 1932, when it was transferred to the Parroquia Santa María del Bosque in Madrid.

San Agustin Church is currently administered by the Augustinian friars from the Augustinian Vicariate of the Orient, a circumscription of the Spanish Augustinian Province of the Most Holy Name of Jesus of the Philippines.

The San Agustin Church is patterned after some of the magnificent temples built by the Augustinians in Mexico. The present edifice was built in 1587, and completed, together with the monastery, in 1604. The atmosphere is medieval since "both church and monastery symbolize the majesty and equilibrium of a Spanish golden era."

The massive structure of the church is highlighted by the symmetry and splendor of the interiors (painted by two Italians who succeeded in producing trompe l'oeil) – the profile of the mouldings, rosettes and sunken panels which appear as three-dimensional carvings, a baroque pulpit with the native pineapple as a motif, the grand pipe organ, the antechoir with a 16th-century crucifix, the choir seats carved in molave with ivory inlays of the 17th century and the set of 16 huge and beautiful chandeliers from Paris.[14]

The church, as in its custom in its heydays, contained niches for burials of bones and remains. The following are notable burials within the premises of the church.