Jasminum sambac (Arabian jasmine or Sambac jasmine) is a species of jasmine native to tropical Asia, from the Indian subcontinent to Southeast Asia.[1][2] It is cultivated in many places, especially across much of South and Southeast Asia. It is naturalized in many scattered locales: Mauritius, Madagascar, the Maldives, Christmas Island, Chiapas, Central America, southern Florida, the Bahamas, Cuba, Hispaniola, Jamaica, Puerto Rico, and the Lesser Antilles.[3][4][5]

Jasminum sambac is a small shrub or vine growing up to 0.5 to 3 m (1.6 to 9.8 ft) in height. It is widely cultivated for its attractive and sweetly fragrant flowers. The flowers may be used as a fragrant ingredient in perfumes and jasmine tea. It is the national flower of the Philippines, where it is known as sampaguita,[6] as well as being one of the three national flowers of Indonesia, where it is known as melati putih.

Jasminum sambac is an evergreen vine or shrub reaching up to 0.5 to 3 m (1.6 to 9.8 ft) tall.[7] The species is highly variable, possibly a result of spontaneous mutation, natural hybridization, and autopolyploidy. Cultivated Jasminum sambac generally do not bear seeds and the plant is reproduced solely by cuttings, layering, marcotting, and other methods of asexual propagation.[3][8][9] 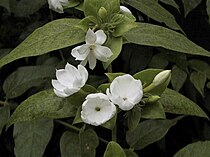 Jasminum sambac is classified under the genus Jasminum under the tribe Jasmineae.[11] It belongs to the olive family Oleaceae.[12]

The Medieval Arabic term "zanbaq" denoted jasmine flower-oil from the flowers of any species of jasmine. This word entered late medieval Latin as "sambacus" and "zambacca" with the same meaning as the Arabic, and then in post-medieval Latin plant taxonomy the word was adopted as a label for the J. sambac species.[15] The J. sambac species is a good source for jasmine flower-oil in terms of the quality of the fragrance and it continues to be cultivated for this purpose for the perfume industry today. The Jasminum officinale species is also cultivated for the same purpose, and probably to a greater extent.

In 1753, Carl Linnaeus first described the plant as Nyctanthes sambac in the first edition of his famous book Systema Naturae. In 1789, William Aiton reclassified the plant to the genus Jasminum. He also coined the common English name of "Arabian jasmine",[16] cementing the misconception that it was Arabian in origin.[13]

The sweet, heady fragrance of Jasminum sambac is its distinct feature. It is widely grown throughout the tropics from the Arabian peninsula to Southeast Asia and the Pacific Islands as an ornamental plant and for its strongly scented flowers.[17] Numerous cultivars currently exist.[10]

Typically, the flowers are harvested as buds during early morning. The flower buds are harvested on basis of color, as firmness and size are variable depending on the weather. The buds have to be white, as green ones may not emit the characteristic fragrance they are known for.[9] Open flowers are generally not harvested as a larger amount of them is needed to extract oils and they lose their fragrance sooner.[3]

J. sambac does not tolerate being frozen, so in temperate regions must be grown under glass, in an unheated greenhouse or conservatory. It has an intense fragrance which some people may find overpowering. In the UK this plant has gained the Royal Horticultural Society’s Award of Garden Merit.[18][19]

There are numerous cultivars of Jasminum sambac which differ from each other by the shape of leaves and the structure of the corolla. The cultivars recognized include:

Jasminum sambac (Filipino and Philippine Spanish: sampaguita) was adopted by the Philippines as the national flower on 1 February 1934 via Proclamation No. 652 issued by American Governor-General Frank Murphy.[21][22][23] It is also known natively as kampupot in Tagalog; kulatai, pongso, or kampupot in Kapampangan; manul in the Visayan languages; lumabi or malul in Maguindanao; and hubar or malur in Tausug.[24]

Filipinos string the flowers into leis, corsages, and sometimes crowns.[25][26] These garlands are available as loose strings of blossoms or as tight clusters of buds, and are commonly sold by vendors outside churches and near intersections.[27]

Sampaguita garlands are used as a form of bestowing honor, veneration, or accolade. These are primarily used to adorn religious images and photographs of the dead on altars. These are placed around the necks of living persons such as dignitaries, visitors, and occasionally to graduating students. Buds strung into ropes several meters long are often used to decorate formal events such state occasions at Malacañang Palace, weddings, and are sometimes used as the ribbon in ribbon cutting ceremonies. Though edible, the flower is rarely used in cuisine, with an unusual example being flavoring for ice cream.

Jasminum sambac was the subject of the danza song La Flor de Manila, composed by Dolores Paterno in 1879 at the age of 25. The song was popular during the Commonwealth and is now regarded as a romantic classic.[28] The flower is also the namesake of the song Collar de Sampaguita.

The fragrance of Lady Gaga's perfume, Fame, was thought to be inspired by Sampaguita when she bought one from the street children in Manila the time she had her concert in the Philippines.[29]

The design of the ceremonial torch for the 2019 Southeast Asian Games, designed by Filipino sculptor Daniel Dela Cruz, was inspired by the sampaguita.[30][31]