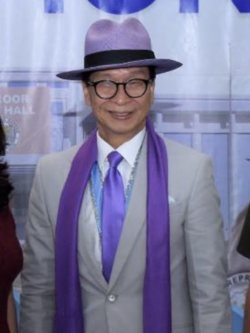 Salvador “Sal” San Buenaventura Panelo (born 23 September 1946) is a Filipino lawyer and the Chief Presidential Legal Counsel of incumbent President Rodrigo Duterte. He was the Presidential Spokesperson of Duterte from 2018 to 2020 and was the legal adviser during Duterte’s 2016 presidential campaign. He was also a former Director of the Integrated Bar of the Philippines (IBP). As a private lawyer, Panelo has handled cases involving politicians and other controversial personalities.

He was one Duterte officials who filed their certificates of candidacy (COC) before the Commission on Elections (COMELEC) on 8 October. He was running for senator under the PDP-Laban Cusi faction.

Panelo was born on 23 September 1946 in Naga, Camarines Sur. He studied at the Murphy Elementary School and at the Roosevelt Memorial High School. He earned his Bachelor of Science Degree in Political Science and Bachelor of Arts in Degree in English at the University of Nueva Caceres. He moved to Manila to study at the University of the Philippines (UP) College of Law where he became a member of the Sigma Rho Fraternity. He also participated in student activism during the pre-Martial Law period. He completed law school in 1974 and passed the Philippine Bar Examination the same year.

He first practiced law at the United Laboratories where he served as its legal counsel from 1977 to 1987. He became Director of the IBP in 1983 and President of IBP Rizal Chapter in 1985. He worked as a radio anchor at DZEC Radyo Agila for a year. In 1987, he started his private law practice.

In his more than 30 years of law practice, he served as defense lawyers of the following prominent politicians:

He was an unsuccessful candidate of the Marcos political party Kilusang Bagong Lipunan (KBL) in the 1992 Senate elections. He then served as Duterte’s transitional spokesperson before being designated as Chief Presidential Legal Counsel.

In May 2020, he hosted a talk show Counterpoint with Secretary Salvador Panelo on People’s Television Network, produced by the Presidential Broadcast Staff-Radio Television Malacañang (RTVM). The said program aimed to discuss the issues affecting the country as well as to analyze and dissect issues raised by critics against certain policies of the government.

On 8 October 2021, he filed his COC to run for senator under the PDP-Laban Cusi faction. Duterte was also present as he endorsed other senatorial candidates from his Cabinet. They are deemed resigned from their posts by virtue of their candidacy filing.

Panelo has always defended Duterte’s advocacies and measures, including the latter’s war on drugs. He is often seen wearing shining suits with eccentric colors during press briefings.

He, who was called out on his insistence that there was no transportation crisis in the traffic-laden Metro Manila, accepted the challenge of commuters’ groups to commute from his home in Marikina to his office in Malacañang.

He also came under fire for tagging Olympian Hidilyn Diaz in a supposed ouster plot in 2019 after presenting a “matrix” of the alleged conspiracy. Diaz denied the allegation.

He is married to Araceli Panelo. They have four children: Ramon Francesca, Salvador Jr., Salvador Carlo, and Salvador Angelo. He also adopted and took care of his sister’s three children: Marinette, Merle, and Michelle, who all graduated from UP Diliman.