SM Prime Holdings, Inc a part of the SM Group of Companies, is the largest mall operator in the ref>HPhilippines. It was incorporated on 06 January 1994 to develop, conduct, operate and maintain the SM commercial shopping centers and all businesses related thereto, such as the lease of commercial spaces within the compound of shopping centers. It later went public on 05 July 1994.

The Company's main sources of revenues include rental income from mall and food courts, cinema ticket sales and amusement income from bowling and ice-skating.

The first department store is the SM Quiapo which was opened in the 1950's but now it was removed and moved in the present site near the Manila LRT Yellow Line. The old site was removed on the year of 1982.

Located in several cities and areas in Metro Manila, as well as major provincial cities, each SM is easily accessible and situated by places of public interest (churches, schools, major roads and highways, etc).

The first ice skating rink in the Philippines was opened in the SM Megamall in 1991. With this first, SM introduced Filipinos to an art-sport otherwise unpopular in tropical countries. The SM Supermalls also house 146 cinemas (with over 103,708 total seating capacity), making SM Prime Holdings, Inc. the largest cinema operator in the country.

As of 2006, SM Prime Holdings, Inc. is embarking on an aggressive expansion program within the next five years. In preparation for this expansion, SM Prime Holdings, Inc. has amassed a total landbank of 96.6 hectares in 10 strategic locations. Included are attractive properties in provinces where urbanization is steadily underway, such as Cabanatuan, Pangasinan and Bulacan.

By 2006, five additional SM Supermalls will be operational, including the Mall of Asia which has opened recently. This is SM Prime Holdings, Inc.’s most extensive project to date.

The SM Group has engaged in other retail endeavors through other SM- related companies such as, among others: Watsons Personal Care Stores, Inc., a joint-venture with Hutchison-Whampoa Ltd. of Hong Kong; International Toy World (Toy Kingdom); Ace Hardware Philippines, a joint-venture with Ace Hardware Corporation USA; Star Appliance Center; Surplus Shop; Sports Central; Baby & Co.; Home World; and Our Home. The amusement is only SM Storyland by Alexis Cerado.

Annex 3 or The Block inside SM North EDSA. 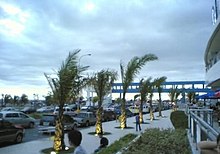 The Manila Bay near SM Mall of Asia.

Branches in the United States of America

SM SupeRadio (DWSM 1188 KHz Manila) is the radio station of SM Prime Holdings, Inc. (a joint venture with Bombo Radyo Philippines), with its broadcast team semi-independent of the main paper editorial team as it is mostly composed of career radio people. Its first terrestrial broadcast on radio was on November 8, 1985.

SM Supermalls and Department Store: We've got it all for you!

SM Supermarket: Always there for you and me!