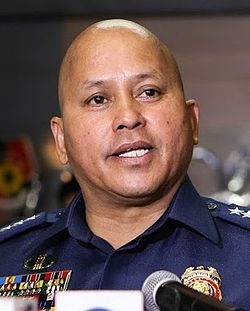 Ronald “Bato” Marapon dela Rosa (born 21 January 1962) is a Filipino politician and retired police officer who currently serves as a senator of the Philippines. He was chief of the Philippine National Police (PNP) from 2016 to 2018 and Director General of the Bureau of Corrections from April to October 2018.

He filed his certificate of candidacy (COC) for president as Cusi-backed PDP-Laban’s standard-bearer in the 2022 election. He later on withdrew his candidacy.

Dela Rosa was born on 21 January 1962 at Davao del Sur to Teodoro Diamanton dela Rosa Sr. and Anesia Cruspero Marapon. His father worked as a tricycle driver and Ronald worked as a fish market porter and bus conductor.

He was called “Bato” during his first assignment in Davao, when his upperclassman likened his body to a rock.

Dela Rosa joined as a Lieutenant of the now-defunct Philippine Constabulary in 1986 in Davao City. He was designated as Chief Inspector in 1992 and worked as one of the staff at Police Regional Office (PRO)-Davao. He was designated as police provincial director of Compostela Valley Province in 1997. He was assigned to the office of the Police Director of the PNP at Camp Crame. In 2001, he returned to PRO-Davao and continued his service as deputy chief of the Office of the Regional Personnel and Human Resource and Development Division (ORPHRDD) of Region XI.

He was promoted to Police Superintendent in 2003 and was assigned to Camp Catitipan in Davao City. He was assigned as head of training of the Directorate for Human Resources Doctrine and Development. He was then assigned as city personnel officer of the Davao City Police Office (DCPO) in 2005. After eight months, he was transferred back to PRO-Davao and was promoted as chief of the Regional Intelligence and Investigation Division (RIID). He became the chief of police and director of the Compostela Valley Provincial Police Office (CVPPO) in 2007. In 2008, he was promoted to a rank of Senior Superintendent. In 2009, he was appointed as director of the Davao del Sur Provincial Police Office (DSPPO). In 2011, he became the chief of the Regional Logistics and Research Development Division (RL-RDD) in PRO-Davao. In 2012, he was assigned as the new director of the Davao City Police Office.

Dela Rosa was the chief of the Davao City Police Office under Mayors Sara Duterte (2010-2013) and Rodrigo Duterte (2013-2016). In 2012, he led the crackdown on the carnapping syndicate allegedly led by Ryan Yu. In July 2013, he headed the successful rescue of the kidnapped Filipino-Chinese businesswoman Sally Chua. He also directed the implementation of Oplan Tokhang (Cebu portmanteau for tuktok, “knock,” and hangyo, “persuade,”) a campaign against illegal drugs where the police knock on the doors of suspected drug users and distributors and persuade them to cease their illegal activities. He also directed the implementation of Oplan Pakgang (Cebu portmanteau for “Pitulon ang Kabatan-onan sa Gang,” “Disciplining Youths in Gangs”) where the police, through a series of lectures and discussions, discouraged Davao City’s youth from joining criminal gangs and other illegal activities.

A few days before the Philippine general election in 2016, dela Rosa was relieved as brigade commander of the Reactionary Standby Support Force (RSSF) of PNP due to his Facebook posts seen to be in favor of then-presidential candidate and now incumbent president Rodrigo Duterte, who had handpicked him to become PNP chief.

As Rodrigo Duterte became President of the Philippines, dela Rosa was officially sworn in as the 21st Chief of the PNP. In August 2016, the newly appointed Chief of the National Police stated: “You know who these drug lords are. Do you want to kill them? Kill them. It’s okay because you're the victim here.” “If you want, you know who these drug lords are. Go to their houses. Pour gasoline in their houses, set it on fire. Show them you’re angry.”

In October 2017, he accused Vice President Leni Robredo of having political ambitions to become president despite working on her current position. After a few days, he hinted that he may run for president in 2022. He was set to retire on 21 January 2018 at age 56, but his term was extended until 21 April 2018.

During his term as PNP chief, dela Rosa was always in the news as he led the controversial drug war and Oplan Tokhang operations throughout the country. Several groups including human rights groups and religious leaders strongly objected these initiatives. The number of deaths resulting from police operations and allegations of systematic extrajudicial executions including planting fabricated evidence to make it appear a suspected drug personality has possession of drugs and resisting from authorities.

During dela Rosa’s campaign for a senatorial seat, he took pride of their drug war operations as these lessened the crime rate and resulted in millions of drug personalities surrendering to the authorities. Dela Rosa was Director General of the Bureau of Corrections from April to October 2018.

Senator of the Philippines

With support of the Dutertes, dela Rosa ran for senate in the 2019 Philippine Senate election. He won by garnering 19 million votes and placing fifth. He took office on 30 June 2019.

As a senator, dela Rosa filed numerous bills. Among the bills he prioritized were an act regulating the use of government ambulances, the Migrant Workers and Overseas Filipino Act of 1995, police scholarships for qualifying students, crisis centers for street children, Barangay Community Peace and Order Council, and job training for older workers. He also pushed for bringing back the capital punishment specifically for drug traffickers, which is yet to be passed. He also sponsored the Bureau of Fire Protection Modernization Bill, which would allow BFP personnel to carry short firearms during fire emergencies and disasters, provided that training will be undertaken by the Department of the Interior and Local Government (DILG) and Philippine National Police (PNP).

On October 8, 2021, the PDP–Laban faction led by Alfonso Cusi endorsed dela Rosa as the party's standard bearer for the 2022 election, citing his ability to continue the work of incumbent President Rodrigo Duterte on their campaign against drugs, corruption, and insurgency. Dela Rosa learned that he was a presidential bet only two hours before deadline. On his filing of candidacy, dela Rosa wore a green Hugpong ng Pagbabago (HNP) shirt and a red PDP-Laban jacket. PDP-Laban is chaired by President Duterte while HNP is a regional party founded by the President’s daughter, Sara Duterte. In November 2021, however, dela Rosa withdrew his candidacy, citing party's decision.

Dela Rosa is married to Nancy Johnson Comandante and they have three children together. Then-Davao City Mayor Rodrigo Duterte was one of the principal sponsors of the wedding. The two had known each other since 1986. Dela Rosa described Duterte as “the greatest influence” in his career.

Dela Rosa’s only son, Rock, entered the PNP Academy as a cadet in May 2017.

On 19 June 2017, dela Rosa was the guest of honor and speaker at the celebration of Jose Rizal’s 156th birth anniversary as he claimed that he was related to Rizal through a common ancestor Ines dela Rosa.