The Roman Catholic Archdiocese of Manila is the archdiocese of the Latin Church of the Catholic Church in Metro Manila, encompassing the cities of Manila, Makati, San Juan, Mandaluyong, and Pasay (except Villamor Air Base and Newport City, which belong to the jurisdiction of the Military Ordinariate of the Philippines). Since December 8, 2019, the See of Manila is vacant after Luis Antonio Tagle, the 32nd Archbishop of Manila, assumed office as Prefect of the Congregation for the Evangelization of Peoples; the archdiocese is currently led by Auxiliary Bishop Broderick Pabillo as apostolic administrator.[1] 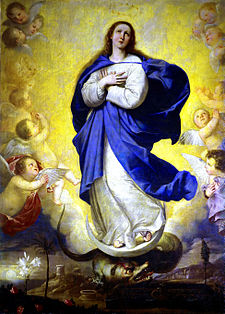 The cathedral church is a minor basilica located in Intramuros, which comprises the old city of Manila. The Blessed Virgin Mary, under the title Immaculate Conception, is the principal patroness.

The archdiocese also owns and manages the following institutions located outside its own territorial jurisdiction: Mount Peace Retreat House (in Baguio City, Benguet), Saint Michael Retreat House (in Antipolo City, Rizal), Radio Veritas (in Barangay Philam, Quezon City which is under the jurisdiction of the Diocese of Cubao), and EDSA Shrine or the Archdiocesan Shrine of Mary, Queen of Peace (in Barangay Ugong Norte, Quezon City).

Per the efforts of conquistador Martín de Goiti – who founded the City of Manila by uniting the dominions of Sulayman III of Namayan, Sabag, Rajah Ache Matanda of Maynila who was a vassal to the Sultan of Brunei, and Lakan Dula of Tondo who was a tributary to Ming Dynasty China – the Diocese of Manila was established on February 6, 1579, through the Papal bull Illius Fulti Præsidio by Pope Gregory XIII, encompassing all Spanish colonies in Asia as a suffragan of the Archdiocese of Mexico. Fray Domingo de Salazar, a Dominican from the Convent of San Sebastian in Salamanca, Spain, was selected by King Philip II of Spain to be bishop of the new diocese and was presented to the pope.[2][3]

Over the course of history and growth of Catholicism in the Philippines, the diocese was elevated and new dioceses had been carved from its territory. On August 14, 1595, Pope Clement VIII raised the diocese to the status of an archdiocese with Bishop Ignacio Santibáñez its first archbishop. Three new dioceses were created as suffragans to Manila: Nueva Cáceres, Nueva Segovia, and Cebu. With the creation of these new dioceses, the territory of the archdiocese was reduced to the city of Manila and the adjoining civil provinces in proximity including Mindoro Island. It was bounded to the north by the Diocese of Nueva Segovia, to the south by the Diocese of Cebu, and to the southeast by the Diocese of Nueva Cáceres.[4] 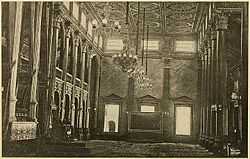 Interior of the Throne Room in the Archbishop's Palace as it was during the Spanish colonial period.

During the Hispanic period, the archdiocese was ruled by a succession of Spanish and Latino archbishops. The British occupation of Manila during the Seven Years' War saw the temporary conversion of Sultan Azim ud-Din I of Sulu to Catholicism, the massive looting and destruction of ecclesiastical treasures, as well as the burning of churches by British soldiers, Sepoy mercenaries, and rebellious Chinese residents in Binondo. This episode was particularly damaging to Philippine scholarship due to the fact that the monasteries holding the archives and artifacts about the precolonial Philippine Rajahnates, Kedatuans, Sultanates, Lakanates and Wangdoms and their conversion to Catholicism were either burnt, lost, or looted by the British. An example would be the Boxer Codex, whose earliest owner Lord Giles of Ilchester had inherited it from an ancestor who stole it from Manila during the British Occupation.

Nevertheless, peace was subsequently restored after the Protestant British occupation. In the time after this, the Catholic religious orders (with the exception of the Jesuits who were temporarily suppressed by the Spaniards due to their role in anti-imperialist movements in Latin America) became the powerful driving force in the Archdiocese of Manila. The local diocesan clergy resented the foreign religious orders due to their near monopoly of ecclesiastical positions. The opposition of the religious orders against an autonomous diocesan clergy independent of them lead to the martyrdom of priests Mariano Gomez, José Burgos, Jacinto Zamora collectively known as Gomburza. This inspired the Jesuit educated Jose Rizal to form the La Liga Filipina, to ask for reforms from Spain and recognition of local clergy.

Rizal was executed and the La Liga Filipina dissolved. The 1896 Philippine revolution was triggered when the Spanish discovered the anti-colonial secret organisation Katipunan, leading to the end of Spanish rule. The United States took the Philippines from Spain in the 1898 Spanish–American War; this developed into fighting between the Philippine revolutionaries and the U.S. in the 1899–1902 Philippine–American War, followed by victory for the U.S. and disestablishment of the Roman Catholic Church as the state church of the Philippines. In the period after the war, Philippine churches were restored in the Art-Deco architectural motif. There was a looming threat of apostasy and schism with the rise of anti-clerical Philippine Freemasonry and the establishment of the Philippine Independent Church due to Filipino anger against Spanish ecclesiastical corruption.[5] In response, the Vatican supported Philippine independence and applied a policy of reinforcing orthodoxy and reconciliation which resulted in the majority of the Filipinos remaining faithful to the Roman Catholic Church and having a good number of those separated from the Church grafted back.

The province of Mindoro was established as an independent diocese on April 10, 1910, by virtue of a Decretum Consistoriale signed by Pope Pius X, implementing the Bull Quae Mari Sinico of Pope Leo XIII. On the same date, the Diocese of Lipa was created, with jurisdiction over the provinces of Batangas, Tayabas, Marinduque, and some parts of Masbate. In May 1928, Pope Pius XI established the Diocese of Lingayen, carved from Manila and Nueva Segovia. In this creation 26 parishes were separated from Manila. He also named Our Lady of Guadalupe as a patroness of the Filipino people in 1938.

December 8, 1941, marked the beginning of the Japanese occupation of the Philippines.[6] Members of the secretive Black Dragon Society had infiltrated all facets of Philippine life and had greatly guided the invading Japanese forces. World War II marked a period of irreplaceable loss to the Archdiocese of Manila. The combination of violent theft and arson done by the Japanese and indiscriminate carpet bombing by the Americans during the Battle of Manila (1945) lead to the permanent loss of many of the ancient Gothic, Art-Deco, and Earthquake Baroque churches found in the Archdiocese of Manila.[7]

In the aftermath of the war, in September 1942, Pope Pius XII declared Our Lady of Immaculate Conception as the Principal Patroness of the Philippines by virtue of the Papal Bull, Impositi Nobis, along with Saints Pudentiana and Rose of Lima as secondary patrons.[8]

Pope John Paul II declared the Manila Cathedral a minor basilica in 1981 through the Motu Proprio Quod Ipsum. In 1983, the province of Rizal, together with the city of Marikina and the northeastern part of Pasig, was placed under the new Diocese of Antipolo.

The seat of the Archbishop is Manila Cathedral, under the patronage of the Our Lady of the Immaculate Conception. After having been served by a single diocesan bishop, nineteen archbishops were later appointed from Spain. In 1903, the archdiocese received its first American archbishop as appointed by the Holy See. Following the tenure of Archbishop Jeremiah James Harty from St. Louis, Missouri, the Irishman Michael J. O'Doherty was appointed and received on September 6, 1916. O'Doherty would lead the church during the period when Filipinos were petitioning for sovereignty from the United States and during the Japanese Occupation of the Philippines during World War II.

When O'Doherty died after Philippine independence in 1946, Most Rev. Gabriel M. Reyes, already serving as coadjutor archbishop, became the first native Filipino chosen for the position. Reyes' successor, Archbishop Rufino Jiao Santos, became the first Filipino to become a cardinal in 1960. After Santos' death in 1973, Auxiliary Bishop Artemio Casas was named in the capacity of vicar-capitular (presently termed as Apostolic Administrator) to oversee the archdiocese until a bishop was officially named. On January 21, 1974, Pope Paul VI appointed then-Archbishop of Jaro Jaime Sin as the 30th Archbishop of Manila. Archbishop Sin was named cardinal in 1976. In 2003, after undergoing juridical changes, the archdiocese received Gaudencio Rosales, Archbishop of Lipa, as successor to Cardinal Sin. Pope Benedict XVI later elevated Rosales to the cardinalate on March 24, 2006. On October 13, 2011, Luis Antonio Gokim Tagle, then Bishop of Imus, was named archbishop and was later made a cardinal by Benedict XVI on November 24, 2012. On December 8, 2019, he was appointed by Pope Francis to be the prefect of Congregation for the Evangelization of Peoples. Tagle has yet to be replaced. In March 2020, Philippine President Duerte said the Pope had removed Tagle from his post in Manila for channeling church funds to the President's political opponents.[9]The Catholic Bishops' Conference of the Philippines (CBCP) and many individual Philippine prelates denounced Duterte's charge.[10]

Other priests of this diocese who became bishops

The archdiocese administers San Carlos Seminary, the archdiocesan major seminary which caters to the formation of future priests for the archdiocese and for its suffragan dioceses. Located in Guadalupe Viejo, Makati City, it has a pre-college program (senior high school and formation year), a college program (A.B., philosophy), and a graduate school (master's program in theology or pastoral ministry), as well as a formation houses for future priests committed to serve the Filipino-Chinese communities in the country (Lorenzo Ruiz Mission Society) and a center for adult vocations (Holy Apostles Senior Seminary). The archdiocese also operates Our Lady of Guadalupe Minor Seminary for young men at the secondary school level. It is located a few blocks from San Carlos Seminary.