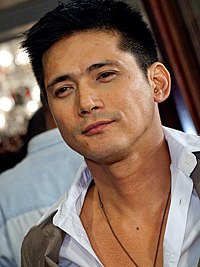 Robinhood Ferdinand Cariño Padilla (born 23 November 1969) is a Filipino actor, screenwriter, producer, and director. He is known as the “Bad Boy” of Philippine Cinema for portraying antiheroic protagonist gangster roles in his films. He adopted the name Abdul Aziz when he was converted to Islam.

He was born on 23 November 1960 in Daet, Camarines Norte to Roy, a film director and politician, and to Lolita Eva, an actress. He has three other siblings namely BB, Rommel, and Royette, who are all actors. His half-brother, Casimero, is a union leader, congressman, and a three-term Governor of Camarines Norte.

Padilla has been active on the silver screen during the 80s. His first break was when he was introduced in Public Enemy No. 2: Maraming Number Two in 1985. He was discovered and managed by Deo Fajardo, Jr.

It was during the 90s when he started to be prominent on show business through his films with Sharon Cuneta and Vina Morales.

In 1994, he was arrested and convicted for illegal possession of firearm, but his jail term was cut short when then Senator Ramon Revilla passed a bill reducing the punishment for persons convicted of owning unlicensed guns. He converted to Islam while serving his jail term. He was granted a conditional pardon and released by then President Fidel V. Ramos in 1998.

In the 2000s, he started to appear in TV shows in ABS-CBN and GMA 7. He also started to appear on comedy films. He has since proven to be a versatile actor after appearing in comedy, thriller, horror, and drama films and TV series. He also has a recurring stint as a judge in Pilipinas Got Talent, a Philippine adaptation to British Got Talent series wherein judges search for the most unique and talented act in the Philippines.

Among the acting awards he received were:

In 2007, he put up a school for Muslim children, Liwanag ng Kapayapaan (Light of Peace) in Fairview, Quezon City. The students were given textbooks, school uniforms, and bus rides. His visit to war-torn parts of Mindanao opened his eyes that the root of insurgency problem in Southern Philippines boils down to the lack of education.

In 2016, he campaigned for presidential candidate Rodrigo Duterte. In November 2016, Duterte granted him full civil and political rights.

On 8 October 2021, Padilla filed his certificate of candidacy (COC) as part of the Alfonso Cusi-led PDP-Laban’s Senate slate.

Padilla is an anti-malaria advocate and appealed for media to support his cause against the disease. As a Movement Against Malaria (MAM) spokesperson, he appeared in TV shows to campaign for the use of mosquito nets.

In 2007, he built a free preschool for Muslim children and donated Php 2.5 million pesos to the Muay Thai Association of the Philippines.

He is also an advocate of nationalism and love of country, which he shows in many of his media appearances.

Padilla has four children with Liezl Sicangco: Elizabeth, Kylie Nicole, Sherileen Zel, and Robinhood Fernando. He is married to Mariel Rodriguez-Padilla. They have two daughters: Maria Isabella and Gabriela.