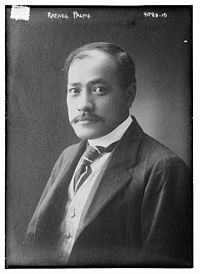 Rafael Palma (24 October 1874 – 24 May 1939) was a Filipino politician, newspaperman and Freemason. He wrote for the newspapers La Independencia, El Nuevo Dia, and El Renacimiento.

Palma was born on 24 October 1874 in Tondo, Manila. He attended public schools in Tondo for his elementary and secondary education and went to Ateneo de Manila for college. He also earned a degree in Law from the University of Santo Tomas.

He started working for La Independencia after the death of Antonio Luna as an editor under the pen name "Dapit Hapon." He later studied law while keeping his post as the editor of El Renacimiento, the most influential newspaper in Manila during the Spanish colonial period. He was elected as an assemblyman and later as a senator in 1916.

He became the first Filipino president of the University of the Philippines and held the post for a decade. In 1933, Manuel Quezon threatened to cut UP's appropriation due to Palma's championing of the Hare-Hawes-Cutting Act. This led to Palma's resignation as UP president. He ran once again for the Senate but was defeated by Juan Sumulong. He was later appointed by Manuel Quezon as chairman of the National Board of Education.

In 1907, Palma was initiated as a Freemason in Bagong Buhay Lodge No. 17 and was passed and raised in the same lodge in 1908. Later, he affiliated with Sinukuan Lodge No. 16 where he became the Master in 1915. In the Scottish Rite of Freemasonry, Palma was a member of Lakandula Lodge of Perfection, Wise Master of the Chapter of Rose Croix, Malcampo Council, Knight of Kadosh and Rizal Consistory. He became a Grand Master of Masons in the Philippines in 1920 and was elected Knight Commander of the Court a year later.

Palma Hall, one of the main buildings, at the University of the Philippines, was named after Palma in recognition of his leadership. A number of schools all around the country have been named after him, as well as a couple of streets and barangays.

Palma authored several books including The Woman and the Right to Vote, The New Mentality, and The Pride of the Malay Race, a biography of Jose Rizal which was later translated into English by Justice Roman Ozaeta.