Puto is a variety of Filipino steamed rice cakes, traditionally made from slightly fermented rice dough (galapong). It is eaten as is or as an accompaniment to a number of savoury dishes (most notably, dinuguan). Puto is also an umbrella term for various kinds of indigenous steamed cakes, including those made without rice. It is a sub-type of kakanin (rice cakes).[1][2]

Puto is made from rice soaked overnight to allow it to ferment slightly. Yeast may sometimes be added to aid this process. It is then ground (traditionally with stone mills) into a rice dough known as galapong. The mixture is then steamed.[2][3]

The Filipino dish dinuguan is traditionally served with puto

Puto with cheese toppings from Mindanao

The most common shape of the putuhán steamer used in making puto is round, ranging from 30 to 60 centimetres in diameter and between 2 to 5 centimetres deep. These steamers are rings made of either soldered sheet metal built around a perforated pan, or of thin strips of bent bamboo enclosing a flat basket of split bamboo slats (similar to a dim sum steamer basket). The cover is almost always conical to allow the condensing steam to drip along the perimeter instead of on the cakes.

A sheet of muslin (katsâ) is stretched over the steamer ring and the prepared rice batter poured directly on it; an alternative method uses banana leaf as a liner. The puto is then sold as large, thick cakes in flat baskets called bilao lined with banana leaf, either as whole loaves or sliced into smaller, lozenge-shaped individual portions.

Properly prepared puto imparts the slightly yeasty aroma of fermented rice galapong, which may be enhanced by the fragrance of banana leaves. It is neither sticky nor dry and crumbly, but soft, moist, and with a fine, uniform grain. The essential flavour is of freshly cooked rice, but it may be sweetened a bit if eaten by itself as a snack instead of as accompaniment to savory dishes. Most puto cooked in the Tagalog-speaking regions may contain a small quantity of wood ash lye. 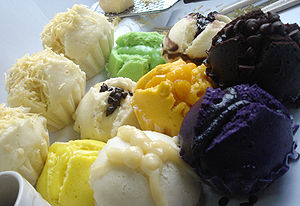 Puto is also an umbrella term for various kinds of indigenous steamed cakes, including those made without rice. The key characteristics are that they are cooked by steaming and are made with some type of flour (to contrast with bibingka, which are baked cakes). There are exceptions, however, like puto seko which is a baked dry cookie. The traditional puto made with galapong is sometimes referred to as putong puti ("white puto") or putong bigas ("rice puto) to distinguish it from other dishes also called puto.[5]

Modern variants of puto may also use non-traditional ingredients like ube (purple yam), vanilla, or chocolate. Notable variants of puto, as well as other dishes classified as puto, include the following: 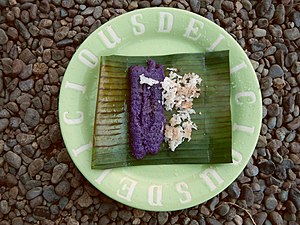 Puto bumbong, a type of puto steamed in bamboo tubes commonly sold during the Christmas season