Pusô or tamu, sometimes known in Philippine English as "hanging rice", is a Filipino rice cake made by boiling rice in a woven pouch of palm leaves. It is most commonly found in octahedral, diamond, or rectangular shapes, but it can also come in various other intricately woven complex forms. It is known under many different names throughout the Philippines with numerous variations, but it is usually associated with the street food cultures of the Visayan and Moro peoples.[1][2][3]

Pusô refers to the way of cooking and serving rice on woven leaves, and thus does not refer to a specific recipe. It can actually refer to many different ways of preparing rice, ranging from plain, to savory or sweet. Regardless, all of them are woven pouches where rice is poured inside and cooked by boiling. Pusô are differentiated from other leaf-wrapped Filipino dishes like suman, binalot, and pastil, in that the latter use leaves that are simply wrapped around the food and folded or tied. Pusô, in contrast, uses intricate woven leaves as the pouch.

Pusô is traditionally prepared as a way to pack rice for journeys and is eaten held in the hands while standing, usually paired with meat or seafood cooked on skewers (commonly satti or "barbecue"). It is still eaten this way from street food peddlers (pungko-pungko). In seated dining, it is commonly cut into pieces and served on a plate in place of regular rice.[2]

Pusô were once culturally important among pre-Hispanic Filipinos as offerings to the diwata spirits and as an extension of the basic skill of weaving among women. It became linked to festivities since they were commonly served during religious events, especially the more complex woven variations. It is still used in rituals in some parts of the Philippines today, though the rituals themselves have been mostly Christianized. Similarly, it remained culturally important to Muslim Filipinos, where it became symbolic of the Hari Raya feast.

Pusô is related to similar dishes in other rice-farming Austronesian cultures, most notably the Malaysian and Indonesian ketupat, although the latter is restricted to diamond shapes and is woven differently.[1] A very similar octahedron-shaped version called atupat was also found in pre-colonial Guam, before the ancient rice cultivation in the island was replaced by corn brought by the Spanish.[4]

Pusô (also spelled puso, poso, or pusó) literally means "heart" in Cebuano, due to its resemblance to a heart with the two loose ends of the coconut leaf emerging at the top resembling the aorta and the venae cavae. Its other most common name, patupat, originally means "four-cornered [rectangle or cube]",[1] a reduplication of Proto-Malayo-Polynesian *epat ("four"). This form is still evident in old Chamorro cognate atupat.[4]

Pusô does not refer to a specific recipe, rather it is a way of packaging and serving rice. Therefore, it can actually refer to many different ways of preparing rice, ranging from plain, to savory or sweet. Regardless, all of them are woven pouches where rice is poured inside and cooked by boiling. As the rice cooks, it is prevented from spreading by the pouch, resulting in a compacted cake-like texture. It can be made with either regular white rice or glutinous rice poured into a pre-woven container and then immersed in a boiling liquid. It is commonly plain, but it can be cooked with meat or flavored with gata (coconut milk) and spices like salt or ginger. Other variants of the dish can also be sweet and can be cooked with muscovado sugar.[1][5]

Pusô are differentiated from other leaf-wrapped Filipino dishes like the Tagalog binalot and the Maguindanao pastil, as well as various kakanin snacks wrapped in leaves found throughout the Philippines, like suman and morón. These dishes all use leaves that are simply wrapped around the food and folded or tied. They are not woven into complex patterns unlike pusô.[1]

Leaf-weaving is an ancient art in the Philippines and is used to make various traditional handicrafts like baskets, hats, mats, toys, sidings, and even religious decorations (both in ancient anitism and in modern Christian Palm Sunday celebrations). Food, as well, is commonly wrapped in woven leaves, the most commonly used being banana or coconut leaves. It makes them aesthetically pleasing, practical to eat, and infuses the food with the aroma of the leaves.[1]

Pusô pouches are almost always woven from coconut leaves, though they can also be made from other palm species or from pandan leaves. The coconut leaves used are freshly sprouted, usually pale yellow to light green in color and far more pliable than older leaves. These young leaves are known as lukay in most Visayan regions; palaspas, usbong, talbos, or ibus in Southern Luzon; dugokan in Leyte; ugbos in Bohol; uyok in Masbate; and langkóy in Bicol. There are numerous techniques by which they can be woven, which has translated into many different kinds of pusô.[1] 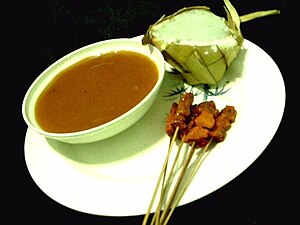 Tausug ta'mu is commonly served with satti in peanut sauce

Pusô originated from a method of cooking and packing rice. It was also prominent in religious rituals in the anitism of pre-colonial Filipinos. The smaller or more elaborate versions were a traditional part of the food offerings to the diwata spirits, a tradition the Spanish referred to as ofrendas. These traditions have been increasingly forgotten or syncretized as Filipinos converted to Christianity and Islam in the last few centuries.[2][5]

Nevertheless, it still survives in some (Christianized) rituals today, like in the pamisa (Catholic prayer for the dead). It is also still a regular part of the ofrenda. Though in modern times the offering is usually to the household Catholic altar or to deceased loved ones, and not to diwata spirits.[5]

Among Muslim Filipinos, it also survives as a festive food, and is very popular during a lot of Islamic holidays. It is particularly associated with the Hari Raya celebrations at the end of Ramadan.[5]

Pusô can be made in many different shapes using a wide variety of techniques. Some ethnic groups have numerous traditional variants, while in other ethnic groups, it is restricted to one or two. A lot of the techniques are also shared across ethnic groups and may be known under different names, indicating shared origins or cultural exchange between the groups in pre-colonial Philippines.[1][6][7][8] 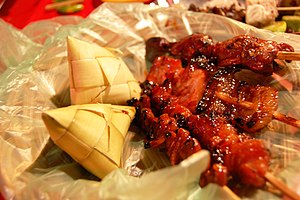 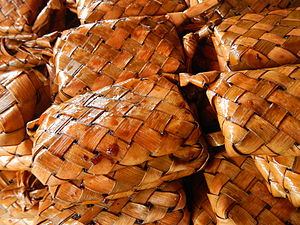 Ilocano patupat, a typically rectangular-shaped sweet variant made with glutinous rice boiled in a mixture of coconut milk and muscovado sugar

Leaf-wrapped dishes are one of the earliest native Filipino food described by the Spaniards when they arrived in the Philippines. The first recorded mention of rice cooked in leaves is by Antonio Pigafetta who wrote in 1525 of a Visayan meal of rice and millet wrapped in leaves served with roast fish.[1]

There are six main accounts of pusô among Visayans published in Vocabularias (dictionaries) of Spanish priests during the Spanish colonial period of the Philippines. Their authors often describe numerous variants varying by shape and weaving patterns, ranging from simple geometric shapes to complex shapes imitating objects or animals. But without illustrations, it is hard to imagine what they looked like, much less how they were made. Nevertheless, they give a glimpse of how complex the traditional pusô were during the pre-Hispanic period, although some of these forms have now been lost.[1]

A pile of pusô being sold in Cebu

Alonso de Méntrida in his Diccionario de la lengua Bisaya, Hiligueina y Haraya de la Isla de Panay (1618) describes six kinds of pusô among the Cebuano, Ilonggo and Karay-a people of Panay. His list repeats some of those mentioned by Sánchez. He includes poso nga linalaque, which he describes as "esquinado" ("angular"); poso nga pinaouican, shaped like a turtle; poso nga binouaya, shaped like a crocodile; poso nga ibaiba, shaped like an iba (rice basket or jar); poso nga galangan, shaped like galangan (star fruit); and poso nga paholan, shaped like the small piece of wood worn around the waist by fishermen to attach fishing lines on.[1]

Francisco Ignacio Alcina also described the Visayan "posos" in his Historia de las islas e indios de Bisayas (1668). He described them as a ritual offering during the pagabo or saragunting ritual, a paganito animistic ritual to the diwata (spirit) of the fireplace. He notes that once consecrated to the diwata spirits, the "posos" are left alone and never opened. Like Sánchez, he describes different types of pusô, namely the linangang, woven with almost white coconut leaves in the shape of a small bird; and ginawig, woven into the shape of a large hen.[1]

Another ceremony that uses pusô described by Alcina is the pagbutas, which was done after a burial ceremony of the dead. The relatives and friends of the deceased would weave a pusô and tie them all together in a large plate of water. The daitan shaman would then cut each pusô away while praying, signifying the separation of the living from the recently departed.[1]

Juan Jose Delgado, another Jesuit priest stationed in Guiguan (modern Guiuan), Samar, writes about taking pusô with him on trips to the forest to cut wood in his Historia general, sacro-profana, politica y natural de las Islas del poniente llamadas Filipinas (1751). He praised the way it kept the rice fresh longer. He also mentions how the pusô is cooked with meat inside in large cauldrons called baon. Though he does not name them, he also describes numerous variations of the weaving patterns, ranging from round, square, or rectangular-shaped. He also remarks upon the skill in weaving even among children who make the pouches, likening their creations to the Gordian knot.[1]

In the late 19th and early 20th century Vocabularias, there are only brief mentions of pusô. Juan Félix de la Encarnacion in 1885 describes pusô as a kind of pouch filled with rice. Although he does also mention pinaoican and pinapagan as separate dishes. Antonio Sanchez de la Rosa in his Diccionario español-bisaya para las provincias de Sámar y Leyte (1914) lists pusô under lambay and langbay, the modern Waray name for pusô derived from the "crab" version that Sánchez described three centuries earlier. He describes it as being a "bolsa de figura de corazon" ("heart-shaped pouch") used to cook rice or rice in coconut milk.[1]

Puso is related to similar dishes in other rice-farming Austronesian cultures, like the Indonesian and Malaysian ketupat, although the latter refers strictly to the diamond or triangular-shaped variants. Ketupat are also woven differently, the leaf base and the loose leaf strands do not exit at the same point, as in most Filipino puso. They are also popularly associated with Eid al-Fitr like the tamu of Muslim Filipinos. Ketupat somewhat resemble the tamu pinad version among Muslim Filipinos the most, which are shaped like a flattened diamond, although they are also woven differently.[9] In Hindu Bali, a similar diamond-shaped variant called the ketipat or tipat is used as an offering to the rice goddess Dewi Sri.[5]

An octahedron-shaped version called atupat was also found in pre-colonial Guam, before the ancient rice cultivation in the island was replaced by corn brought by the Spanish.[4][10]