It is the least densely populated city in the Philippines. In terms of land area, the city is the second largest geographically after Davao City with an area of Template:Convert.[1] Puerto Princesa is the location of the Philippines' Western Command headquarters.[2]

Today, Puerto Princesa is a tourist city with many beach resorts and seafood restaurants. It has been acclaimed several times as the cleanest and greenest city in the Philippines.[3]

The name Puerto Princesa have several origins. It is said to have been attributed by locals to a princess-like maiden who roam the place at certain nights of the year, while other accounts attributed its geographical advantage as a seaport which is a naturally protected area due to its surrounding mountains, and is characterized by a depth able to accommodate any size of shipping vessel.[4]

Historically, this place was originally named Port Asuncion after Princess Asuncion, one of the princesses born to Isabella II of Spain and her consort, Francis, Duke of Cádiz. When the princess suffered an untimely death, the Queen changed the name to Puerto de la Princesa. Eventually, the name was shortened to Puerto Princesa.[5]

Spanish colonizers founded the settlement on March 4, 1872 in the course of their exploration of the province. As they scanned the Palawan shoreline for a capital site, they came upon a hill with steep declivity. Rowing to shore, they surveyed the hill and discovered an extensive plateau which they decided as ideal for settlement.

Soon after, Fr. Antonio Muro levelled a portion of the hill to make way for a chapel (that section is now occupied by the Roman Catholic Cathedral, the P.C. Barracks and the Rizal Park, the Old Municipal Building used to be there, as well as an Elementary School). The first mass celebrated in Puerto Princesa took place at a site where a marker now stands.

In May 1872, the Port of Puerto Princesa became the center of Spanish Naval Operations in the area because the Bay met all the Navy's requirements. Royal Decrees later provided incentives to settlers, and by 1883 the settlement had flourished into a town of twelve roads, a hospital and well-built port.

In 1894, Puerto Princesa was recognized by government authorities as one of the most beautiful towns in the country by virtue of the orderly distribution of streets, buildings and houses as well as the cleanliness of the community.Template:Citation needed

In 1911, the New American Administration made Puerto Princesa the seat of the Palawan Provincial Government with Major John Brown as Lieutenant Governor.

In the year 1936, Governor Heginio Mendoza made a directive on the transfer of the Palawan High School (currently Palawan National School) from the island municipality of Cuyo to the central place of the province, which was the Municipality of Puerto Princesa.[6]

During WWII and the Japanese occupation, the village was largely abandoned. On May 18, 1942, Japanese troops landed and occupied Puerto Princesa City.[7]

The Filipino Constabulary barracks was the scene of the Palawan Massacre, just before liberation with the allied Invasion of Palawan.[8]

The town was converted into a city on 1 January 1970 under Republic Act 5906 as amended by P.D. 437,[13][14] through the effort of then Congressman Ramon Mitra, Jr. Feliberto R. Oliveros, Jr., who then became the first City Mayor.

In May 2001, Abu Sayyaf gunmen entered the luxury Dos Palmas Resort in Honda Bay just off the coast of Puerto Princesa and kidnapped 20 people from the resort, including four resort staff and three Americans.[15]

Since its foundation, Puerto Princesa has been the nerve center of activities in Palawan. Aside from being the seat of public administration, it is the heart of trade, commerce, service, and industry in the province.

Administratively and politically, Puerto Princesa is divided into 66 barangay or 1st to 2nd district s, 35 of which are classified as urban barangays and 31 as rural with population.[16]

Puerto Princesa features a tropical wet and dry climate (Köppen climate classification Aw). It is usually wet from May to December and with very little rain from January to April. Average temperature is Template:Convert while the annual average rainfall is Template:Convert per year. It is warm and humid all year round.

Waves of migrants from other Philippine provinces, and even other countries, have turned Puerto Princesa into a melting pot of various cultures. Among the original inhabitants are the Cuyonons who have a rich legacy of folklore and traditions. Indigenous groups include the Tagbanwas, Palawanos, Molbogs and Bataks, each group with its distinct culture and system of beliefs.

Total inhabitants number Template:PH wikidata (as of Template:PH wikidata), of which three-quarter of the population resides in the city proper, an urban settlement on the shores of Puerto Princesa Bay. Although the predominant language is Tagalog, Cuyonon is widely spoken and used throughout the whole city, as well as Hiligaynon, other Visayan languages, and English.

Puerto Princesa is known as the "Eco-Tourism Center of the Philippines".[17] In recent years, the city has seen an increase in the number of tourists bringing with them trade and businesses for the city.Template:Citation needed Many hotels ranging from basic to five-star luxury accommodations have been developed since the 1990s to cater to a growing number of foreign and local tourists in the city.Template:Citation needed

Puerto Princesa City will also be having its first condomnium building along Gabinete Rd., Brgy. Bancao-Bancao which is set to be completed on 2021. Camella Manors Verdant is developed by Vista Land and Lifescapes Inc. under its newest brand of high-quality and exclusive condo villages, Camella Manors.[18] There are also a number of restaurants, bars and shopping malls, including the Robinsons Place Palawan, NCCC Mall Palawan, Unitop Mall Puerto Princesa, as well as the recently opened SM City Puerto Princesa.

Some tourists who come to Puerto Princesa visit the Puerto Princesa Subterranean River National Park, one of the New7Wonders of Nature, located 50 km north of the city.[19] The city is also the jump-off point for exploring the Tubbataha Reef. Template:Clear-left

The Puerto Princesa International Airport is within the city proper. Puerto Princesa is accessible by direct flights to and from the major cities of the Philippines, such as Manila, Cebu, Davao, Iloilo & Clark, as well as other parts of Palawan, such as Cuyo, Busuanga, San Vicente and El Nido.

The city is served by domestic passenger ferries to Cuyo, Manila, Coron and Iloilo at the Port of Puerto Princesa. 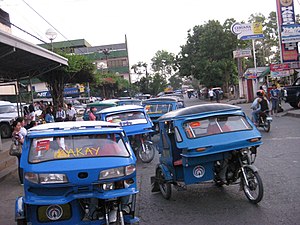 Tricycles within the city

The main modes of transport are via tricycles, jeepneys and vans-for-hire (or PUVs/public utility vehicles). Taxis started operating since April 2015, plying through the city center and nearby tourist destinations. Provincial buses and jeepneys operate from the San Jose terminal located 7 km north of the city center off the National Highway.

Puerto Princesa then Mayor Edward S. Hagedorn unveiled the environment-friendly and economical electric-powered “Trikebayan” (which does not emit any noise or carbon monoxide) at the Kapihan sa Sulo forum, Sulo Hotel, Quezon City. The Trikebayan costs only Template:Philippine peso or $1.20 per day to operate, while a gasoline-powered tricycle operation would cost Template:Philippine peso.[20] Rolly Concepcion, who conceptualized the Trikebayan, said that converting a tricycle engine to electric costs Template:Philippine peso. The rechargeable battery under the passenger seat can run for 12 hours.[21] Mr. Conception died before the project was completed.

This did not discourage the previous mayor Hagedorn from pursuing a dream of seeing all electric vehicles, especially replacing the gas tricycles in the city. There was a dealership for these trikes on the north highway but it closed down in 2011.

Although Puerto Princesa has this bold plan for electric vehicles, the municipal government and tourist office has stated (when asked by a tourist in August 2011),Template:Better source needed that it has no published or announced plan for providing for the current and future needs and safety of pedestrians or bicycle riders. Spaces for walking and bicycling from one place to another are not being considered.Template:Citation needed

All of the major television broadcasting channels' regional offices are located in the city. ABS-CBN Corporation expanded its network in Palawan by establishing ABS-CBN Palawan, which operates ABS-CBN channel 7 Puerto Princesa, ABS-CBN Sports and Action Palawan DYAP-AM and MOR! Local shows such as TV Patrol Palawan are broadcast throughout the region via ABS-CBN Regional, which is also stationed in the city. Bandera News Philippines's airs shows via channel 40 Local Shows Such as Alerto 38, GMA Network's channel 12 and GMA News TV channel 27 are also available.

Puerto Princesa has a number of FM and AM radio stations, some of which operate 24 hours daily.

Elected and appointed public officials have governed Puerto Princesa, with a strong mayor-council government. The city political government is composed of the mayor, vice mayor, ten councilors, one Sangguniang Kabataan (SK) Federation representative and an Association of Barangay Captains (ABC) representative. Each official is elected publicly to a three-year terms.

The following are the current city officials of Puerto Princesa: