Pinipig are immature grains of glutinous rice pounded until flat before being toasted. It is commonly used as toppings for various desserts in Philippine cuisine, but can also be eaten plain, made into cakes, or mixed with drinks and other dishes.[1][2][3] 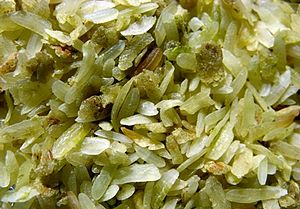 Pinipig is made solely from glutinous rice (malagkit or "sticky" rice). The grains are harvested while still green. They are husked and the chaff is separated from the grain (traditionally using large flat winnowing baskets called bilao). The resulting bright green kernels are then pounded in large wooden mortars and pestles until flat. They are then toasted dry on pans or baked until crisp.[4][5]

Pinipig are characteristically light green in color when fresh, but usually become yellowish white to brown when toasted. They superficially resemble grains of oats, and are often confused with puffed rice. The texture is crunchy on the exterior with a chewy center.[5][6] 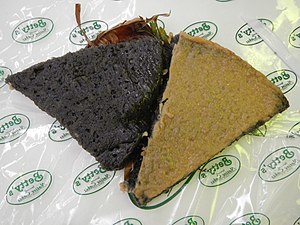 Cakes made from duman, a variant of pinipig from Santa Rita, Pampanga

A notable regional variant of the pinipig is the duman, which is made in Santa Rita, Pampanga in the Philippines. Duman, like pinipig, is also made from immature grains of glutinous rice, but it is toasted before it is pounded.[7]