Piña is a traditional Philippine fiber made from pineapple leaves. Pineapples were widely cultivated in the Philippines since the 17th century for weaving lustrous lace-like luxury textiles known as nipis fabric. The name is derived from Spanish piña, meaning "pineapple".

In February 2018, the National Commission for Culture and the Arts, along with the government of Aklan, began the process of nominating Kalibo piña weaving in the UNESCO Intangible Cultural Heritage Lists.[1]

Tampuhan, an 1895 painting by Juan Luna of a Filipina in traditional traje de mestiza dress, which was largely made from piña

Pineapples were introduced by the Spanish to the Philippines during the Spanish colonial era. The cultivar now known as 'Red Spanish' began to be cultivated for the textile industry as early as the 17th century. The extraction and weaving techniques were direct adaptations of the native weaving traditions using abacá fiber, which has a similar texture. Piña were woven into lustrous lace-like nipis fabrics usually decorated with intricate floral embroidery known as calado and sombrado.[2][3]

The fabric was a luxury export from the Philippines during the Spanish colonial period and gained favor among European aristocracy in the 18th and 19th centuries. Nipis fabrics were esteemed as exotic and sumptuous. Notable uses by royalty include the baptismal gown of King Alfonso XIII presented as a gift by Pope Pius X (now in the Museo del Traje); a piña handkerchief given as a wedding gift to Princess Alexandra of Denmark on her marriage to King Edward VII; as well as a petticoat and undergarment for Queen Victoria. An unfinished Maria Clara gown was also commissioned by the Marquis of Yriarte (then Governor of Laguna) intended for Queen Isabella II, who abdicated in 1870.[4] Numerous examples of 19th century embroidered piña textiles are in the collections of various museums around the world, although their history remains understudied in academic literature.[5]

Domestically, they were used to make the traditional barong tagalog, baro't saya, and traje de mestiza clothing of the Filipino upper class, as well as women's kerchiefs (pañuelo). They were favored for their light and breezy quality, which was ideal in the hot tropical climate of the islands. The industry was destroyed in the Second World War and is only starting to be revived.[2][3][6]

Numerous pineapple-based dishes were also developed in the Philippines as a result of the pineapple textile industry. These include traditional ingredients and dishes like pineapple vinegar, hamonado, afritada, and pininyahang manok. Another notable by-product is a traditional jelly-like dessert called nata de piña, which has been produced in the Philippines since the 18th century.[7] 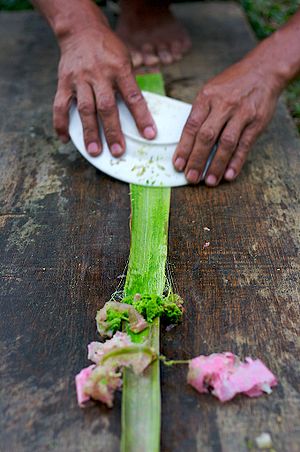 Scraping a pineapple leaf to reveal the fibers.

Since piña is from a leaf, the leaf has to be cut first from the plant. Then the fiber is pulled or split away from the leaf. Most leaf fibers are long and somewhat stiff. Each strand of the piña fiber is hand scraped and is knotted one by one to form a continuous filament to be handwoven and then made into a piña cloth.

Kalibo, Aklan, is the main and the oldest manufacturer/weaver of piña cloth in the Philippines which are being exported to various parts of the world most particularly North America, and Europe.[8] Piña weaving is an age-old tradition which was recently revived in the past 20 years.

Piña fabric is characterized by being lightweight but stiff, with a sheer appearance and a smooth silk-like texture. In modern times, it is predominantly used in the making of barong tagalog, baro't saya, and other traditional formal wear in the Philippines. It is also used for table linens, bags, mats and other clothing items.