Independence Day[1] (Filipino: Araw ng Kasarinlán; also known as Araw ng Kalayaan, "Day of Freedom") is an annual national holiday in the Philippines observed on June 12,[2] commemorating the declaration of Philippine independence from Spain in 1898.[2]

The Proclamation of Independence on June 12, 1898, as depicted on the back of the 1985 Philippine five peso bill. 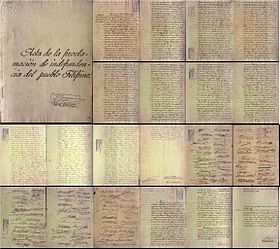 The earliest recorded was when Andres Bonifacio, along with Emilio Jacinto, Restituto Javier, Guillermo Masangkay, Aurelio Tolentino, Faustino Manalak, Pedro Zabala and few other Katipuneros went to Pamitinan Cave in Montalban, Rizal to initiate new members of the Katipunan. Bonifacio wrote Viva la independencia Filipina! or Long Live Philippine independence on walls of the cave to express the goal of their secret society.[3] Bonifacio also led the Cry of Pugad Lawin, which signals the beginning of Philippine Revolution. Members of the Katipunan, led by Bonifacio, tore their community tax certificates (cedulas personales) in protest of Spanish conquest.[4][5]

The Philippine Revolution began in 1896. The Pact of Biak-na-Bato, signed on December 14, 1897, established a truce between the Spanish colonial government and the Filipino revolutionaries. Under its terms, Emilio Aguinaldo and other revolutionary leaders went into exile in Hong Kong.[6]

At the outbreak of the Spanish–American War, Commodore George Dewey sailed from Hong Kong to Manila Bay leading the U.S. Navy Asiatic Squadron. On May 1, 1898, Dewey defeated the Spanish in the Battle of Manila Bay, which effectively put the U.S. in control of the Spanish colonial government. Later that month, the U.S. Navy transported Aguinaldo back to the Philippines.[7] Aguinaldo arrived on May 19, 1898 in Cavite.[8]

On June 5, 1898, Aguinaldo issued a decree at Aguinaldo house located in what was then known as Cavite El Viejo proclaiming June 12, 1898 as the day of independence. The Acta de la Proclamacion de la Independencia del Pueblo Filipino was solemnly read by its author, Ambrosio Rianzares Bautista, Aguinaldo's war counselor and special delegate.[9] The 21-page declaration was signed by 98 Filipinos, appointed by Aguinaldo, and one retired American artillery officer, Colonel L. M. Johnson.[10] The Philippine flag was officially unfurled for the first time at about 4:30 p.m, as the Marcha Nacional Filipina was played by the band of San Francisco de Malabon.[11]

The Flag of the United States of America is lowered while the Flag of the Philippines is raised during the Independence Day ceremonies on July 4, 1946.

The proclamation was initially ratified by 190 municipal presidents from the 16 provinces controlled by the revolutionary army August 1, 1898, and was again ratified on September 29, 1898 by the Malolos Congress.[12]

July 4 was chosen as the date by the United States because it corresponds to the United States' Independence Day, and that day was observed in the Philippines as Independence Day until 1962. On May 12, 1962, President Diosdado Macapagal issued Presidential Proclamation No. 28, which declared June 12 a special public holiday throughout the Philippines, "... in commemoration of our people's declaration of their inherent and inalienable right to freedom and independence.[17]" On August 4, 1964, Republic Act No. 4166 renamed July 4 holiday as "Philippine Republic Day", proclaimed June 12 as "Philippine Independence Day", and enjoined all citizens of the Philippines to observe the latter with befitting rites.[18] 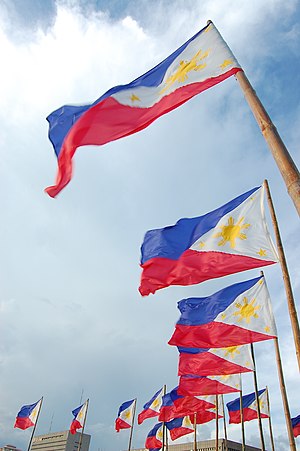 Prior to 1964, June 12 was observed as Flag Day in the country. In 1965, President Diosdado Macapagal issued Proclamation No. 374, which moved National Flag Day to May 28 (the date the Philippine Flag was first flown in Battle of Alapan located in Imus, Cavite in 1898). In 1994, President Fidel V. Ramos issued Executive Order No. 179, extending the celebration period from May 28 to Philippine Independence Day on June 12, ordering government departments, agencies, offices, government owned and controlled corporations, state agencies, and local government units, and even private establishments, to prominently display the National Flag in all public buildings, government institutions, and official residences during this period; ordering the Department of Education, in coordination with the private sector, non-government organizations, and socio-civic groups, to enjoin the prominent display of the National Flag in all public squares and, whenever practicable, in all private buildings and homes in celebration of national independence.[19][20]

As required by law, the Flag of the Philippines, first flown on that day in 1898, is displayed in homes and establishments from as early as May 28, Flag Day, or on a selected date of May by the National Historical Commission of the Philippines, which serves as the organizer of the celebrations, to the 30th of the month.[21] Kawit, Cavite holds a yearly commemorative act with the flag raising at the Aguinaldo Shrine and the reading of the Philippine Declaration of Independence.[22] Worldwide, Filipinos gather on June 12 or a date close to it to publicly celebrate, sometimes with a parade.[23] There are also local celebrations as well, as well as a national celebration in Manila, the national capital, which in past years included a civil-military parade of uniformed organizations and public and private entitles, the last major parade was held in 2018 to mark the 120th year of nationhood.[24]