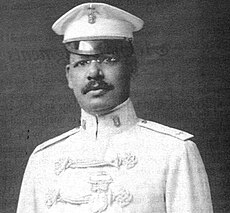 Walter Loving was the first director of the Philippine Constabulary Band.

The Philippine Constabulary Band was formed on the orders of Colonel Henry Allen, the first chief of the Philippine Constabulary.[1] Walter Loving, a former United States Army regimental band leader who had been educated at the New England Conservatory of Music, successfully applied for the directorship of the new organization which saw its first public performance in late 1902 at the Manila Elks Club.[1] The band's first members were recruited by Loving from community ensembles that performed in the small towns of Luzon, some of whom were former musicians in Spanish Army bands.[1][2] Auditions for the ensemble were fierce; 300 clarinetists, for instance, tried out for just eight billets.[1]

As the constabulary's only band, it was a fixture of ceremonial and social engagements at Malacañang Palace where it met with the appreciation of Governor-General of the Philippines William Howard Taft.[3] Taft responded favorably to virtually all of Loving's appropriations requests for the band; his support of the group led to the unofficial moniker "Taft's Own."[1] 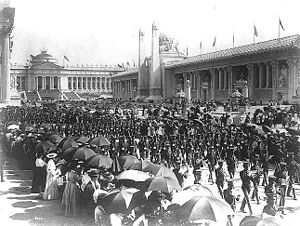 The band's first overseas performance came just three years after its formation when it accompanied the Philippine Scouts to the Louisiana Purchase Exposition of 1904 in St. Louis, Missouri. Four companies of Scouts had been sent to the fair to drill the manual of arms for President Theodore Roosevelt, who requested that the Constabulary Band play one of his favorite marches, The Garryowen, which it obliged as the president "clapped heartily."[4] John Philip Sousa, who was in attendance at the fair, was among those who heard the Philippine Constabulary Band play and remarked, "I am simply amazed. I have rarely heard such playing."[5]

After its inaugural engagement, the band remained in the mainland United States for several months, performing at other public events. A concert at the New York Hippodrome met with a "rousing reception" in which "encore after encore" was demanded, the band finally concluding with the overture from Tannhäuser followed by the Stars and Stripes Forever.[9] On April 17, 1909, the band returned to Washington at the request of Helen Taft to perform at the opening of West Potomac Park.[10] Later, it appeared in Seattle at the Alaska-Yukon-Pacific Exposition to herald the arrival of President Taft for his inspection of the fairgrounds. The band then traveled to San Francisco, California to depart for the return voyage to the Philippines. As their troopship was departing, Taft ordered his own vessel to pull alongside. Seeing the president's ship approach, the band struck up Hail to the Chief prompting Taft to shout back "goodbye, boys – I wish you a pleasant voyage!"[11]

A 1909 story from the Spokane Daily Chronicle reports on the Philippine Constabulary Band's appearance at the Alaska-Yukon-Pacific Exposition in Seattle.

The band's third major overseas performance came in 1915 when it was engaged to appear at the Panama Pacific International Exposition in San Francisco. Its reputation by then well-secured in the United States, the band remained stationed in California for nearly a year, during which time it performed 115 public concerts.[12] During this time it again met John Philip Sousa, who on one occasion guest conducted the band and afterwards commented, "when I closed my eyes, I thought it was the United States Marine Band."[8]

In 1915 Walter Loving sought, and was granted, a medical disability due to worsening tuberculosis. He was replaced as director of the band by Pedro B. Navarro. Navarro had been with the PC Band since 1902, served as Loving's assistant conductor since 1904, and took over when Loving fell ill during the 1915 Panama Pacific International Exposition.[13] He was succeeded by José Silos in 1918. During this period the quality of the band suffered and, in 1920, Loving returned to the Philippines to rebuild the group. As part of his long-term plan to ensure the future stability of the band, he hand-picked bandsman Alfonso Fresnido to succeed him. Fresnido was sent to Ohio to study conducting at the Dana Music Institute (now the Dana School of Music at Youngstown State University) before returning to take over the band from Loving, who retired a second time in 1923.[1] 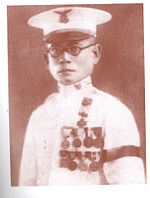 Pedro Navarro was the second director of the Philippine Constabulary Band.

In 1939, the Philippine government sent the band to represent the commonwealth at the Golden Gate International Exposition in San Francisco.[14] Loving retired for the third time the following year; he remained in Manila and would occasionally take up the baton as guest conductor.[1]

The band ceased to exist following the Japanese occupation of the Philippines in 1942.[1] During the course of hostilities, most of its members were killed.[15]

After the war, which neither Loving nor Fresnido survived, the Philippine Army organized a new group, the "Philippine Army Band", as its premier musical ensemble under the direction of Lieutenant (later, Colonel) Antonino Buenaventura.[16][17]

The modern Philippine Army Band considers itself the successor to the Philippine Constabulary Band. According to it, "the PA Band is the fulfilment of the first American civil governor William Howard Taft’s promise of forming a Filipino military band that would be a counterpart of the famous US Marine Band."[2]

The PC Band itself was reconstituted postwar under new leadership, and produced a number of LPs promoting Filipino music in the 1970s. Its full dress uniforms were by then in the scarlet and gold mirroring that of the United States Marine Band but with AFP insignia and PC patches. In 1974 the Integrated National Police Metropolitan Police Force Command Band was raised as part of the nationalization of the police departments as the official police band for Metro Manila, with its 5 divisions sporting its own bands. Today, the Philippine National Police Band, the official senior police band under the current Philippine National Police, also continues the heritage of the old band.

The U.S. military periodical Army and Navy Life described the band as "one of the finest of all military bands in the world", and the Pacific Coast Musical Review considered the band "in a class by itself."[8][18][19]

The PC Band was re-organized in 1946 after the Second World War. At the helm was then Captain Jose M. Campaña who held dedicatedly the Commanding Officer (CO) position for around two (2) decades or up to the middle of the sixties when he retired from the service as full-fledge Colonel. He was honored posthumously as the father of the modern PC Band by then Chief of the Philippine Constabulary, Gen. Fidel V. Ramos.