The PAF has an estimated strength of over 15,000 personnel and operates 211 aircraft.[1]

By the end of the First World War, the US Army and Navy began selling aircraft and equipment to the Philippine Militia Commission. The Commission then hired the services of the Curtiss Flying School to provide flight training to 33 students at Camp Claudio, Parañaque.

The early aviation unit was, however, still lacking enough knowledge and equipment to be considered as an air force and was then limited only to air transport duties.[2] On January 2, 1935, Philippine Military Aviation was activated when the 10th Congress passed Commonwealth Act 1494 that provided for the organization of the Philippine Constabulary Air Corps (PCAC). PCAC was renamed the Philippine Army Air Corps (PAAC) in 1936. It started with only three planes on its inventory. In 1941, PAAC had a total of 54 aircraft including pursuit (fighters) light bombers, reconnaissance aircraft, light transport and trainers.[2] They later engaged the Japanese when they invaded the Philippines in 1941–42, and were reformed in 1945 after the country's liberation.

The main aircraft type in the earlier era of the PAF was the P-51 Mustang, flown from 1947 to 1959. Ground attack missions were flown against various insurgent groups, with aircraft hit by ground fire but none shot down. In the 1950s the Mustang was used by the Blue Diamonds aerobatic display team.[4] These would be replaced by the jet-powered North American F-86 Sabres in the late 1950s, assisted by Lockheed T-33 Shooting Star and Beechcraft T-34 Mentor trainers.

The PAF saw its first international action in the Congo under the UN peacekeeping mission in 1960.

F-86D of the Philippine Air Force

During the 70s, the PAF was actively providing air support for the AFP campaign against the MNLF forces in Central Mindanao, aside from doing the airlifting duties for troop movements from Manila and Cebu to the warzone. Traditional workhorses like the UH-1H choppers, L-20 “Beaver” aircraft, and C-47 gunships were mainly used in the campaign. In the same decade, the PAF Self-Reliance Development Group, the forerunner of the Air Force Research and Development Center (AFRDC) was created. The Center enabled the PAF to create prototypes of aircraft aside on going into partnership with the private sector for some of its requirements.[5]

In late 1977, the Philippine government purchased 35 secondhand U.S. Navy F-8Hs that were stored at Davis-Monthan AFB in Arizona. Twenty-five of them were refurbished by Vought and the remaining 10 were used for spare parts. As part of the deal, the U.S. would train Philippine pilots in using the TF-8A. They were mostly used for intercepting Soviet bombers. The F-8s were grounded in 1988 and were finally withdrawn from service in 1991 after they were badly damaged by the Mount Pinatubo eruption, and have since been offered for sale as scrap.[6]

On February 24, 1986 at the height of the "EDSA Revolution", the 15th Strike Wing defected to the Ramos-Enrile camp, taking their squadrons of S-76 “Sikorsky” that later dictated the EDSA People Power Revolution which effectively ended the Marcos rule. 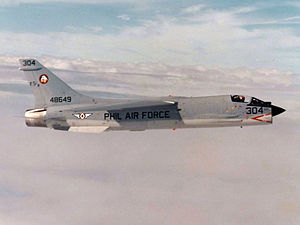 The following years remained hostile for the Philippines, a series of bloody coup attempts led by then-Col Gregorio Honasan of the Reform the Armed Forces Movement, involved thousands of renegade troops, including elite units from the army and marines, in a coordinated series of attacks on Malacanang and several major military camps in Manila and surrounding provinces, including Sangley and Villamor Air Base, using the T-28 aircraft for aerial assaults. President Corazon Aquino found it necessary to request United States support to put down the uprising. As a result, a large US special operations force was formed and named Operation Classic Resolve, as USAF F4 fighter aircraft stationed at Clark Air Base patrolled above rebel air bases, and two aircraft carriers were positioned off the Philippines. The US operation soon caused the coup to collapse. Additional US forces were then sent to secure the American embassy in Manila. The military uprisings resulted in an estimated US$1.5 billion loss to the Philippine Economy.[7]

US Military departure from the Philippines

The Cold War Era has reached its endpoint as tensions between the two ideological rivals, the United States and the Soviet Union, have simmered down as a result of the dissolution of the latter and the massive change of political system among its allies. 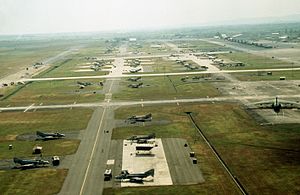 An aerial photo of Clark Airbase in Central Luzon

The fate of the US military bases in the country was greatly affected by these circumstances, aside from the catastrophic eruption of Mount Pinatubo in 1991 which engulfed the installations with ash and lahar flows. The nearby Clark Air Base was eventually abandoned afterwards, while the Philippine Senate voted to reject a new treaty for Subic Naval Complex, its sister American installation in Zambales. This occurrence had effectively ended the century-old US military presence in the country, even as President Corazon Aquino tried to extend the lease agreement by calling a national referendum, leaving a security vacuum in the region and terminated the inflows of economic and military aid into the Philippines. [8] [9]

The importance of territorial defense capability was highlighted in the public eye on 1995 when the AFP published photographs of Chinese structures on Mischief Reef in the Spratlys.

The PAF MD-520MG displayed at the Mall of Asia.

Initial attempts to improve the capabilities of the Armed Forces happened when a law was passed in the same year for the sale of redundant military installations and devote 35 percent of the proceeds for the AFP upgrades. Subsequently, the legislature passed the AFP Modernization Act. The law sought to modernize the AFP over a 15-year period, with minimum appropriation of 10-billion Pesos per year for the first five years, subject to increase in subsequent years of the program. The modernization fund was to be separate and distinct from the rest of the AFP budget.

However, the Asian Financial Crisis struck the region on 1997. This has greatly affected the AFP Modernization Program due to the government's austerity measures meant to turn the economy around after suffering from losses incurred during the financial crisis.[10]

Several air assets acquired by the Philippine Air Force thru the original AFP Modernization Program of 1995 were the AW109 armed scout helicopters, and airlift assets like the Airbus C295 and CASA C212 Aviocar.[11]

A decade of neglect

Since the retirement of the Northrop F-5s in September 2005 without a planned replacement, the Philippine air force was left without fighter jets. The PAF resorted to the Aermacchi S-211 trainer jets to fill the void left by the F-5's. These S-211's were later upgraded to light attack capability and used for air and sea patrol and also performed counter-insurgency operations from time to time.[12] The only active fixed wing aircraft to fill the roles were the SF-260 trainers with light attack capability, the OV-10 Bronco light attack and reconnaissance aircraft and the AS-211 warriors (upgraded S-211).

Major air assets acquired in this new modernization program iteration are 12 FA-50 Light Fighters, while those programmed for future procurements are the Multi-Role Fighters and the Maritime Patrol Aircraft, among other equipment.[15]

In response to regional strategic challenges and perceived internal weaknesses, the PAF has embarked on a transformation process to enhance its capabilities. Flight Plan 2028 is administered by the Air Force Strategy Management Office (AFSMO), and aims to:

The plan calls for a reorienting of the Philippine Air Force from a primarily internal security role to a territorial defence force. It will require substantial organizational, doctrinal, training, strategic and equipment transformation.

In April 2014, the Enhanced Defense Cooperation Agreement was signed by the representatives of the Philippine and US Governments, aimed at bolstering the military alliance of both countries. The agreement allows the United States to rotate troops into the Philippines for extended stays and allows the U.S. to build and operate temporary facilities on Philippine military bases for both American and Philippine forces' use.[16] [17]

Both parties agreed to determine the military installations across the Philippines as covered by the pact, including the former US Subic Bay Naval Base and Clark Air Base, as well as several locations on Cebu, Luzon, and Palawan.[18]

As of 2016, four PAF bases and one Army camp have been determined by the United States and the Philippines to be utilized under the agreement. The Air Force Bases are Basa Air Base, Antonio Bautista Air Base, Benito Ebuen Air Base, and Lumbia Airfield.[19]

The three Tactical Commands are in the direct control of the PAF Leadership while serving his function in the command chain of the AFP. These units are jointly reactivated and reorganized on July 21, 2017 while effectively replacing the 1st, 2nd, and 3rd Air Divisions as part of the PAF Flight Plan 2028.[20]

5th Fighter Wing, Basa Air Base – It is responsible for air defense and interdiction. It replaced the Air Defense Wing after the two were reactivated to their original status on 2017.

15th Strike Wing, Danilo Atienza Air Base – It is responsible for providing combat air support to surface forces of the AFP.[21]

580th Aircraft Control and Warning Wing, Wallace Air Station – It is responsible for operating air defense and surveillance radar systems of the PAF. It was reactivated on November 3, 2016 after being downgraded to a Group on April 1, 2005.[26]

710th Special Operations Wing, Colonel Ernesto Rabina Air Base – It is responsible for conducting special operations, counter terrorism, and defense of PAF bases and facilities. The unit is also being groomed to be responsible for ground-based air defense system (GBADS) units which is being inducted into the PAF's future capabilities.

505th Search and Rescue Group, Villamor Air Base – It is responsible for air search and rescue operations in support of the AFP and civilian agencies.[27] The unit currently flies the Bell 205A, UH-1H Huey II, Bell UH-1H Super Huey, and the PZL W-3A Sokół as SAR helicopters, and the Sikorsky S-76A and S-70 as Air Ambulances.

The Philippine Air Force Blue Diamonds "Sabre" emblem on a F-86F Sabre, circa 1962.

The Philippine Air Force had a number of aerobatic teams among which the PAF Blue Diamonds was the first to be founded, and was one of the oldest formal aerobatics teams in the world. The proceeding units listed are currently at inactive status due to the retirement of their aircraft, most notably the Northrop F-5 Freedom Fighters.

The Philippine Air Force has nine major air bases and several radar, communications, and support facilities located throughout the archipelago. Shared facilities with commercial airports currently being used as detachments by the Tactical Operations Command were not included here. 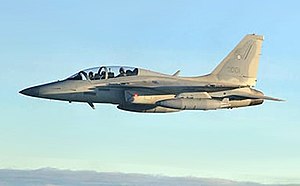 An FA-50PH of the 7th Tactical Fighter Squadron

A W-3A Sokół of the 505th Search and Rescue Group 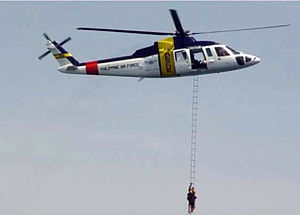 An S-76 search and rescue helicopter

A PAF OV-10 Bronco equipped with the Paveway Laser-Guided Bomb.