Patis (English: Fish Sauce) is a pungent-flavored flavoring sauce and condiment made from salted, fermented fish. Patis is frequently used in the Philippines and in other Southeast Asian cooking to add saltiness to dishes. In Southeast Asian cuisines, it is also used as a dip for fish, shrimp, pork, and chicken.

In southern China, it is used as a cooking oil, or as an ingredient for soups and casseroles.

Some fish sauces are made from raw fish, others from dried fish, some from only a single species; others from whatever is dredged up in the net, including some shellfish; some from whole fish, others from only the blood or viscera. Some fish sauces contain only fish and salt, others add a variety of herbs and spices. Fish sauce that has been only briefly fermented has a pronounced fishy taste, while extended fermentation reduces this and gives the product a nuttier, cheesier flavor.

Asian fish sauce is often made from anchovies, salt and water, and is often used in moderation because it is intensely flavoured. The variety from Vietnam is generally called nước mắm, and similar condiments from Thailand and Myanmar are called nam pla (น้ำปลา) and ngan byar yay respectively. In Cambodia, it is known as teuk trei and range from a variety of sauces using fish sauce as a base. The Indonesian semisolid fish paste trasi, the Cambodian prahok and the Malay fermented krill brick belacan are other popular variations of the same theme. The similar Filipino version common to Indo-China is called patis. It is the by-product of a popular crude fish sauce, bagoong. 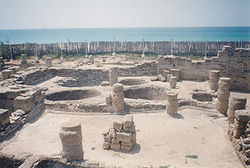 Ruins of a Roman garum factory near Tarifa, Spain

A similar fish sauce was ubiquitous in Classical Roman cooking, where in Latin it is known as garum or liquamen, and also existed in many varieties such as oxygarum (mixed with vinegar) and meligarum (mixed with honey). It was one of the trade specialties in Hispania Baetica.

Garum is frequently maligned as being bad smelling or rotten. For example, it has been described as an "evil-smelling fish sauce" made of fish ranging from tuna, mackerel, and moray eel to anchovies (Introduction to Paul Wilkinson, Pompeii: The Last Day, London BBC Productions 2003). This attitude derives in part from ancient authors who satirized the condiment, but mostly from the fact that fish sauce was generally unknown in the Western world until very recently. The truth is quite different, and in fact garum only smelled when it was being made. Once the process was complete it produced a pleasant aroma for as long as it was usable.[1]

In English it was formerly translated as fishpickle. The original Worcestershire sauce was a similar product, brought to England from India. Some have suggested anchovy paste as the modern descendant of garum, but it is not fermented.

Here is a recipe from the 1881 Household Cyclopedia for an antique non-fermented fish sauce.

Set all these over a slow fire to simmer an hour, then strain it through a sieve; when cold put it in a bottle with the spice, but not the herbs. To a large coffeecupful cold, put a pound of butter; stir it over the fire till it is as thick as cream; shake the bottle when used, and put no water to the butter.

In Vietnamese restaurants (across North America, at least), fish sauce is rarely presented to the client in pure or "straight" form. Rather, it is usually mixed with water, vinegar, or lime or lemon juice, and sugar, and often other ingredients such as crushed garlic, ground ginger, Tabasco sauce, chili pepper seeds and/or marinated carrots. This mix (known as nước chấm) accompanies such dishes as Imperial rolls and rice vermicelli noodles (and various permutations thereof, e.g. bún bì, bún chả giò etc.). Here is one rendition of the basic formula: