Parols are the traditional Christmas lanterns in the Philippines that are hung outside houses as decoration. Made in the shape of a star with five or more points, they symbolize the Star of Bethlehem.

The traditional materials for making parols are mostly simple -- bamboo sticks, Japanese rice paper, and crepe paper. In modern times, plastic, heavier paper, cellophane and capiz are also used. The traditional candle or oil lantern inside has been replaced by electric lights.

The city of San Fernando in Pampanga is known for making the grandest and largest parols, with flashing and changing lights in various colors. During the city's Giant Lantern Festival, the people parade parols 20 ft. or taller and mounted on truck beds. 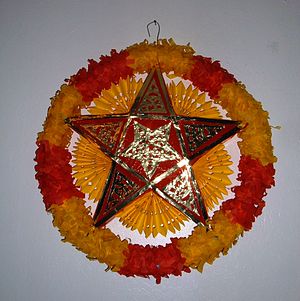 An orange and red parol. BrokenSphere

A simple parol made with Capiz shells. Eugene Alvin Villar

The parol-making tradition began after the Christianization of the Philippines. The word parol comes from farol, which is Spanish for lantern (an allusion to the famed lighthouse of Pharos). World Book's Christmas in the Philippines suggests that the parol originated from the Mexican piñata, which like the parol is decorated with crepe paper. The piñata, originally from Italy, was brought to Spain and from there to Mexico then finally to the Philippines, when the Spaniards brought Christianity to the country and galleon trade with Mexico began.

According to A Child's Pasko: Christmas in the Philippines, the parol's original function was to light the way of those going to church for each Misa de Gallo and the Misa de Aguinaldo. The paper lampshades were originally shaped like fleur-de-lis or crosses. Rather than storing their lanterns in between uses, the owners chose to display them. The people would try to outdo each other's designs, coming up with more beautiful and innovative designs each year. The typical design that eventually resulted was that of a five-pointed star with tassels that suggested a comet's tail. The practice of making parols was encouraged by the Church and resulted in the elevation of parol-making to an art. To this day, new innovations are being made to the design of parol lanterns. Today’s lanterns have become engineering and electrical feats, designed to accommodate and effect as many Christmas lights and sequences as possible.

The city of San Fernando in Pampanga is known for making the grandest and largest parols, with flashing and changing lights in various colors. During the city's Giant Lantern Festival, the people parade parols 20 ft. or taller and mounted on truck beds.

The University of the Philippines also showcases parols through its annual Lantern Parade. Institutionalized in 1934 by then UP President Jorge C. Bocobo, the parade was inspired by the folk practice of carrying lanterns of various shapes and sizes to light the way to the early morning December masses or misa de gallo during the Spanish period.[1]