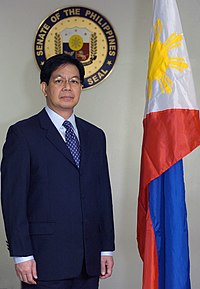 Panfilo "Ping" Morena Lacson Sr. (born 1 June 1948) is a politician and former police general. He was head of the Presidential Anti-Organized Crime Task Force (PAOCTF) and the director-general of the Philippine National Police from 1999 to 2001 under President Joseph Estrada. He was senator from 2001-2013. He is currently serving his third term as a senator.

Lacson's policies and program include apprehending corrupt policemen (Kotong Cops) and various organized crime syndicates engaged in kidnapping, drug trafficking, and other illegal activities. He also advocates for the removal of huge congressional insertions or "pork barrel" system, believing it to be the main source of corruption in the government.

On 8 September 2021, Lacson formally declared his candidacy for president in the 2022 Philippine general election, with Senator Vicente "Tito" Sotto as running mate.

Panfilo “Ping” Morena Lacson Sr. was born on 1 June 1948 in Imus, Cavite. He graduated from Bayang Luma Elementary School in 1960 and from Imus Institute, where he received his secondary education, in 1964. After receiving a bachelor’s degree in philosophy from the Lyceum of the Philippines University, he began his military training at the Philippine Military Academy (PMA) in 1967 and was classmates with former senator Gregorio Honasan. He graduated from the PMA in 1971. He earned a master’s degree in government management from from the Pamantasan ng Lungsod ng Maynila in 1996.

Lacson joined the Philippine Constabulary’s (PC) Metropolitan Command (Metrocom) upon graduating from the PMA in 1971, serving in the special force until the toppling of the Marcos dictatorship in 1986. After the 1986 People Power Revolution, Lacson served as the commander of the Philippine Constabulary (PC)-Integrated National Police (INP) Anti-Carnapping Task Force from 1986 to 1988. He was the provincial commander of Isabela from 1988 to 1989 and the commander of the Cebu Metropolitan District Command from 1989 to 1992.

Lacson joined the Philippine National Police when it was created in 1991 after the merger of the PC and the INP. He then became the PNP’s provincial director for Laguna from February to July 1992 and the chief of Task Force Habagat of the Presidential Anti-Crime Commission from 1992 to 1995.

From 1998 to 1991, under the abbreviated administration of Joseph Estrada, Lacson served as the head of the Presidential Anti-Organized Crime Task Force.

While serving as PAOCTF chief, Lacson was promoted to chief of the PNP, holding office from 1999 to 2001. He retired from his post and the PNP on February 16, 2001  to run for senator.

In 1995, when Lacson was the head of the Task Force Habagat of the Presidential Anti-Crime Commission (PACC), 11 members of the organized crime syndicate Kuratong Baleleng were killed in Quezon City by a government task force in what was alleged to be a rubout.[1] The PACC was part of the composite task force involved in the incident.

In November 2012, the Supreme Court, in an en banc decsion, affirmed the decision of the lower court to dismiss the case.[2]

Lacson and President Joseph Estrada were implicated in the killings of publicist Salvador “Bubby” Dacer and his driver, Emmanuel Corbito. The victims were abducted on November 24, 2000 and their charred remains were found in April 2001 by a creek in Indang, Cavite.[3]

In his affidavit in 2001, Dumlao implicated Estrada and Lacson, who both denied the allegations.

In his affidavit in 2009, Mancao alleged that Lacson masterminded the killings of Dacer and Corbito. Mancao said he was present in the meeting in October 2000 where Lacson ordered Aquino to kill Dacer and Corbito. Lacson said the office of president Gloria Macapagal-Arroyo pressured Mancao to sign the affidavit.

These developments precipitated the 15 months that Lacson would be a fugitive from justice. On 5 January 2010, shortly after charges were filed against him, he left the Philippines for Hong Kong. Sightings of him in Hong Kong and Rome were reported but he was never caught.

On 5 February 2010, Branch 18 of Manila’s Regional Trial Court issued a warrant of arrest against Lacon. On 11 February 2010, Interpol published a Red Notice for Lacson for his arrest.

The Court of Appeals withdrew the murder charges against Lacson on February 3, 2011, citing Mancao as “not a credible and trustworthy witness.” Lacson returned to the Philippines on 26 March 2011,[4] a month after the Supreme Court’s affirming of the Court of Appeals decision on the case.

Mancao went into hiding after escaping from the custody of the National Bureau of Investigation in May 2013. He surrendered to authorities in February 2017.[5] In September 2020, he was appointed executive director of the Department of Communications and Technology’s cybercrime center.[6]

Lacson successfully ran for senator in the 2001 elections under the Laban ng Demokratikong Pilipino (LDP), which belonged to Joseph Estrada’s Pwersa ng Masa coalition. Lacson had the 10th highest number of votes.

In March 2003, Lacson delivered a speech in which he condemned the corruption inherent in the pork barrel system. In the speech, titled “Living Without Pork,” he called for the abolition of the system. As a senator, Lacson has never used his Priority Development Assistance Fund (PDAF) allocation, which has resulted in the reverting of ₱ 2.4 billion to the national treasury from his supposed allocation over his first 12 years in the Senate.

Lacson ran for president in the 2004 elections. After a disagreement with Laban ng Demokratikong Pilipino president Edgardo Angara, who supported the presidential bid of Fernando Poe Jr. Lacson resigned from the party and campaigned as an independent candidate.[7] Lacson received the third-highest number of votes in the election.

Lacson was appointed presidential assistant for rehabilitation and recovery by President Benigno Simeon Aquino III in the aftermath of Super Typhoon Yolanda in November 2013.

Lacson successfully staged a comeback to the Senate after placing fourth in the 2016 elections. He initially intended to run for president but changed his mind after ranking low in the surveys.

On 8 September 2021, Lacson launched his campaign for the presidency ahead of the 2022 elections. He is running under the Partido Reporma, of which he became its president in July. His running mate is Senate President Tito Sotto, the chairman of the Nationalist People’s Coalition.

Lacson and Sotto’s platform is centered on providing a stronger government response to the COVID-19 pandemic and restoring public confidence in the government.[8] However, Lacson and Sotto have been called enablers of Rodrigo Duterte, whose administration has been marred with allegations of human rights violation and corruption.[9]

Lacson is married to Alice de Perio. They have four children. Their son Panfilo “Pampi” Lacson Jr. has a son with actress and former wife Jodi Sta. Maria and a daughter with actress Iwa Moto.