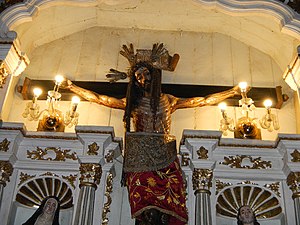 Pakil Crucifix is a sculptured image of Jesus Christ nailed in a cross that depicts His extreme agony in the cross, which also became a central figure in Christian iconography. It was carved in the early 1800-1900 by an anonymous sculptor at Laguna.

The Polychromed hardwoond sculpture with embroidered cloth and metal appurtenances measures approximately to 2.13 cm for the figure and 305 x 213 cm. for the cross.It is housed in the Roman Catholic Church of Pakil, Laguna.