The Pacific War Memorial is a memorial structure located in Corregidor Island in the Philippines which was erected in commemoration of the Filipino and American servicemen who were involved in the fighting of the Pacific War during World War II in the Philippines. The memorial was completed in 1968 with financial contribution from the United States Congress. It reportedly cost 1.23 million dollars to construct. 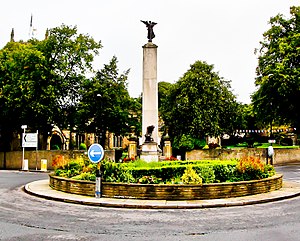 The Pacific War Memorial consists of a complex with several monuments. The main part of the structure is a rotunda with an open circular skylight in its dome that lets sunlight in during the day. Directly underneath the skylight is a circular marble altar, which is directly lit by the sun during the week of May 6, the anniversary of the fall of Corregidor. Taking the form of a symbolic wreath of victory, the altar has these lines inscribed on its edge: "Sleep, my sons, your duty done, for Freedom's light has come; sleep in the silent depths of the sea, or in your bed of hallowed sod, until you hear at dawn the low, clear reveille of God."

Behind the dome close to the spot where Gen. Douglas MacArthur opened the celebration of the recapture of Corregidor on March 2, 1945 is a large abstract steel sculpture called the Eternal Flame of Freedom. This sculpture was designed by Aristides Demetrios, a Philippine sculptor based in Greece. It symbolizes the flame of freedom burning eternally, a reminder of the determination and sacrifice of the United States and the Philippines in fighting to uphold the freedom of their people for generations to come. The Eternal Flame sculpture rests on a high concrete platform, from which a stunning panoramic view of Bataan Peninsula, Manila, and the Cavite coastline can be seen, and it overlooks a reflecting pool.

Beside the main memorial structure is a museum. It exhibits photographs and artifacts related to the Pacific War, such as Commonwealth Era coins and katanas or Japanese swords. Also displayed in the museum is a large mosaic depicting Corregidor Island and the battles fought there. The museum also has a film projection room where documentary films can be viewed, and a souvenir shop.

The Pacific War Memorial is found on the western side of Corregidor Island (known as the Topside) at the highest point, to the right of the movie theater Cine Corregidor.

The memorial was built by the US government in commemoration of the heroic struggle and sacrifice of the US and Philippine veterans who had fought in the Pacific War. It was completed in 1968 and cost 1.23 million dollars to make.

It was originally intended that the sculpture of the Eternal Flame be floodlit, but the cost of doing this was found to be prohibitive until 2005, when solar power was employed in order to light the sculpture. The Eternal Flame was first lit up thus on the evening of March 1, 2005, the eve of the 60th anniversary of the return of General MacArthur to Corregidor.