Although occasionally spelled as Ozamis in official sources, City Resolution 251-05 officially spelled Ozamiz with a "z" as its last letter rather than with an "s".

Ozamiz is close to Zamboanga del Sur and Zamboanga del Norte provinces, while across the bay is Lanao del Norte. Ozamiz is Template:Convert from Maria Cristina Falls, the main source of hydroelectric power in Mindanao.

The city of Ozamiz grew out of an old Spanish town called Misamis—a name believed to have been derived from the Subanen word "Kuyamis," a variety of coconut. Other unverified historical sources, however, suggest that the name Misamis came from "Misa" after the Catholic Mass. The origin and the growth of the old Spanish town, Misamis, was due to the presence of the Spanish garrison stationed at the stone fort named Nuestra Senora dela Concepcion del Triunfo, which was constructed some time in the 18th century in order to control the pirate activities originating in the nearby Lanao area. In 1850, the town of Misamis became the capital of the District of Misamis.

In October 1942, Wendell Fertig established the command headquarters of the growing guerrilla resistance to the Japanese occupation of Mindanao in the Spanish fort in the city. His headquarters was abandoned June 26, 1943, in the face of a large Japanese attack.[1] Until the end of the war the Japanese occupied this fort. The Ozamiz city website said of this, "During the Japanese occupation of Misamis in World War II(1943-1945), the "Cotta" was garrisoned by a contingent of Japanese who dug foxholes near or under the walls. This undermining of walls later led to the destruction of the Southwest bastion in the earthquake of 1955."[2]

After the Second World War, Misamis became a chartered city by virtue of Republic Act 321 on July 16, 1948. RA 321 also renamed Misamis to Ozamiz after a WW-II hero José Ozámiz who hailed from the province of Misamis Occidental and who at one time also served as its governor and congressional representative of the Lone District of Misamis Occidental, a delegate to the 1935 Constitutional Convention that resulted in the creation of the 1935 Constitution for the Philippine Commonwealth Government. In 1941, José Ozámiz was elected to the Philippine Senate. 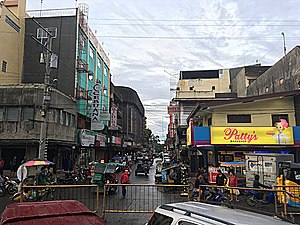 Ozamiz is agricultural by resources, but it has become the center for commerce, health, transportation, and education in this part of Mindanao, considering its strategic location and its peaceful atmosphere. The city has good harbor location, its local port is the principal outlet of mineral deposits, agricultural and forest products of the provinces of Misamis Occidental, Zamboanga del Norte, Zamboanga del Sur, Maguindanao, parts of Lanao del Norte, and Lanao del Sur.

Due to the location of the city, Ozamiz enjoys several notable shopping centers within its city center. People from Misamis Occidental, parts of Lanao del Norte and parts of Zamboanga del Sur will come also to Ozamiz for their shopping needs.

Gaisano Capital Mall Ozamiz is the biggest mall in the city with the expansion of a new South Wing Mall in 2011. Novo Ozamiz also expand and construct their own bigger building with a hotel named Asia Novotel in 2010. Unitop Ozamiz also expand their building in 2012 in front of City Public Mall with a bridge for an easy access from the 2nd floor of both buildings. City Public Mall, formerly known as City Public Market, is the biggest public establishment in Northwestern Mindanao. It is owned and managed by the Ozamiz government and opened on May 28, 2009. Robinsons Supermarket opened to the public on November 30, 2012. Puregold Ozamiz opened in the year of 2019 with the first ever 7-11 Convenience Store serving the developing city.

Local officials are elected every 3 years. The city local government is composed of the mayor, vice mayor, ten councilors, one Sangguniang Kabataan (SK) Federation representative, one (IPMR) Representative and an Association of Barangay Captains (ABC) representative.

The feast of Our Lady of Triumph of the Cross at Cotta Shrine is celebrated every July 16 which is also the Charter City anniversary. Subayan Keg Subanon festival is also held on the same day. The Cotta entertainment area has free live band concerts and other musical variety shows each weekend. Fireworks displays are held at Cotta during Fiesta and holidays. It can be seen across Panguil bay as far as Lanao del Norte.

The feast of Our Lady of Immaculate Conception is celebrated every December 8 while every 4th Sunday of January is the Sr. Santo Nino Fluvial Parade held at Panguil Bay. Balanghoy Festival is held annually at Cotta area.

Ozamiz Airport, also known as Labo Airport, was reopened July 5, 2007, 9 years after Philippine Airlines (PAL) stopped their operations using Fokker 50 and Sunriser planes and eventually went the airport to its closure due to its short runway in which cannot accommodate jet planes. Air Philippines, (a subsidiary airline of PAL), was the first airline served the Ninoy Aquino International Airport in Manila using a B737-200 which is also the first jet plane to land the airport while PAL Express (another PAL subsidiary), was then served direct flights to the Mactan–Cebu International Airport again using their Bombardier Q400.

PAL's competitor, Cebu Pacific Air later opened their service in Ozamiz with its first flight to Cebu on November 10, 2008 using their brand-new ATR72-500. With high demand of passengers, cargo and tourist arrivals, Cebu Pacific then launched its Manila route with their Airbus 319, while PAL took over Air Philippines service to Manila using also the Airbus 319 last June 16, 2009.

When Air Philippines took its rebranding as Airphil Express (now PAL Express), it then relaunched its Ozamiz to Manila flight last August 18, 2011 using their Airbus A320. It then forces Cebu Pacific to change its aircraft to replace all of their ATR72-500 that serves Ozamiz Airport to an Airbus A319 and Airbus A320. Despite fierce competition between PAL and Cebu Pacific, PAL ended their operations in Ozamiz last March 25, 2012, leaving their affiliate PAL Express to compete with Cebu Pacific. Since then, the competition between PAL Express and Cebu Pacific became the duopoly in serving to and from the airport.

Ozamiz Airport will undergo a P300M expansion and development with installation of runway lights, extension of runway from its current of length 1.9 km to 2.1 km and construction of a new passenger terminal building.[5][6]

The public mode of transportation within the city is by trisikad/pedicab and motorized tricycle, while Rural Transit, Super Five, UV Express, and public utility jeepneys such as Lotradisco were the predominant transport for interprovincial routes, to and from the city.

The secondary schools of Ozamiz are:[7]