Ormoc, officially the City of Ormoc (Cebuano: Dakbayan sa Ormoc; Waray: Syudad han Ormoc; Tagalog: Lungsod ng Ormoc), 1st class independent component city in the province of Leyte in the region of Eastern Visayas of the Philippines. According to the 2015 census, it has a population of 215,031 inhabitants,  making it the second most-populous city in the province after the provincial capital of Tacloban. Ormoc is the economic, cultural, commercial and transportation hub of western Leyte.

Ormoc is an independent component city, not subject to regulation from the Provincial Government of Leyte. However, the city is part of the 4th Congressional District of Leyte together with Albuera, Kananga, Merida, Palompon and Isabel, and statistically grouped under the province by the Philippine Statistics Authority. On November 8, 2013, the city was extensively damaged by Super Typhoon Yolanda (Haiyan), having previously suffered severe destruction and loss of life in 1991 from torrential flooding during Tropical Storm Thelma (Uring).

The city's name is derived from ogmok, an archaic Visayan term for "lowland" or "depressed plain". The city also celebrates an annual thanksgiving festival called the Piña Festival in honor of the saints Peter and Paul in thanks for the bountiful pineapple harvest.

Ormoc City is a port city and is the largest city in Leyte by land area and the second-largest in Eastern Visayas after Calbayog City in Samar. At the head of Ormoc Bay, the city's terrain is mostly of gently rolling plains. It is bounded on the northwest by the towns of Matag-ob and Merida, in the north by Kananga, in the northeast by the towns of Jaro, Pastrana and Dagami, and in the south by the town of Albuera. High mountain ranges separate Ormoc from the eastern portion of Leyte. Numerous rivers and streams traverse Ormoc. Among them are the Bao River in the north, Pagsangahan River in the west, the Bagong-bong River in the south, the Panilahan River also in the south and the Anilao and Malbasag Rivers which border the eastern and western flanks of Ormoc City Proper.[1]

Ormoc is politically subdivided into 110 barangays.

Ormoc became a city by virtue of Republic Act No. 179 on October 20, 1947, becoming the fifteenth city in the Philippines and the first in the Eastern Visayas region.[2]

Kananga was created in 1950 from the barrios of Lonoy, Kananga, Rizal, Tugbong, Montebello, Aguiting, Tagaytay, Montealegre, Libungao, Naghalin, and Masarayao which all used to be part of Ormoc City.[3]

On the morning of 5 November 1991, the Ormoc region was inundated by Tropical Storm Uring. The city government recorded 4,922 deaths, 3,000 missing persons, 14,000 destroyed houses and more than P600 million worth of damaged property.[4] None of the 3,000 missing persons were ever found and are now presumed dead.[5] Illegal logging and kaingin (slash-and-burn farming) were blamed as the reasons of the flood.[4] Heavy rainfall caused water to collect upstream the Anilao and Malbasag rivers until it poured to the lowlands in Ormoc, particularly District 26, also known as Isla Verde.[4]

According to Roderick Caballero Deiparine, on 5 November 2011, a monument by national artist Francis Cinco commemorating the 20th anniversary of the event was inaugurated.[6] It sits on top of the mass grave at the Ormoc City Public Cemetery where an estimated 4,900 victims are buried.[7] The sculpture, entitled "Gift of Life", is an abstract depicting a life taken to heaven.[4][6]

A fire at the Unitop store killed 25[8] people on Christmas day. The fire started from firecrackers and pyrotechnics that were ignited near the entrance door. The store did not have a permit to sell firecrackers and emergency exits were locked. The charred remains of the victims were found inside a bathroom, where they tried to escape from the blaze.[9][10]

On November 7, 2013, Typhoon Haiyan, one of the most powerful tropical cyclones ever recorded, made a landfall in the Philippines. While it killed far fewer people as Tropical Storm Uring, it left widespread devastation to the city with destruction and damages in 90% of its structures.[11]

The natives of this city are called Ormocanons, with most being Cebuano speakers, as with the whole western and southern parts of the island of Leyte. A definite number of Waray speakers is also present within the city.

Like most Filipinos, Ormocanons are predominantly Roman Catholic, and the city celebrates its annual fiesta in honour of the patron saints Saint Peter and Saint Paul on June 28 and 29. Other main Catholic holy days, including the local fiestas of barangays, are observed throughout the year. There is also a visible Muslim minority within the city and all over the island, evidenced by the mosques within the cityscape and most of them are Maranaos from the twin provinces of Lanao del Norte and Lanao del Sur in Mindanao.

Ormoc's economic base is a mix of agriculture, aquaculture, industry, tourism, and commercial services. Sugar cane, rice and pineapple are the major agricultural production.

The city enjoys economic growth because it supplies a large part of the country's power needs with its abundant geothermal power resources from the Tongonan Geothermal Power Plant in Barangay Tongonan and the neighbouring Kananga town. Ormoc is also the gateway to the Leyte Industrial Development Estate in the nearby town of Isabel, home of the Philippine Phosphate Fertilizer Plant, the largest fertilizer factory in Asia, and the Philippine Associated Smelter and Refining Company, the country's biggest copper processing plant, among other industries. 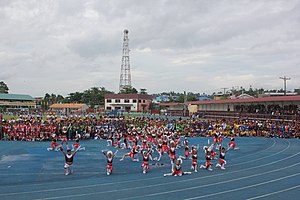 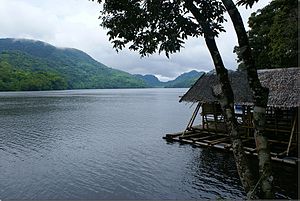 Among sites visited by the city's tourist are:

The Port of Ormoc serves as the seaport of the city. For air transport, Ormoc Airport serves the city.

Ormoc hosts the biggest geothermal power plant in Southeast Asia - the Tongonan Geothermal Power in Barangay Tongonan which supplies electricity not only in the Eastern Visayas Region but power demand in Luzon as well.

Ormoc is the educational center for western Leyte. It has a range of primary and secondary schools, both public and private. Tertiary education was originally offered by St. Peter's College of Ormoc, a Benedictine-run Catholic college and the oldest, followed by Western Leyte College of Ormoc City, Inc.,[20] a private non-sectarian college. In the 1990s, the city saw the establishment of Santo Niño College of Ormoc, St. Paul's School of Ormoc Foundation, Inc. and the STI College - Ormoc. In the 2000s, tertiary institutions founded were ACLC College of Ormoc, San Lorenzo Ruiz College of Ormoc, Ormoc City Institute of Technology (OCIT) and the Ormoc campus of the Eastern Visayas State University.

Ormoc also has their own Chinese school which is Ormoc Se San School.