Oriental Mindoro is a province in the Philippines located on the island of Mindoro under Mimaropa region in Luzon, about Template:Convert southwest of Manila. The province is bordered by the Verde Island Passage and the rest of Batangas to the north, by Marinduque, Maestre de Campo (or known as Sibale but official name is Concepcion) Island, Tablas Strait and the rest of Romblon to the east, by Semirara and the rest of Caluya Islands, Antique to the south, and by Occidental Mindoro to the west. Calapan, the only city in the island, is the provincial capital.

Oriental Mindoro is touted as the country's emerging eco-tourism destination. In 2005, the Philippines was found to be the center of marine fish biodiversity and the home of the most diverse marine ecosystem in the world,[1] by American biologists Kent Carpenter and Victor Springer. Most of the endemic species in the Philippines are found in the Verde Island Passage between Mindoro island and the main island of Luzon. The passage houses 2,983 individual species of algae, corals, crustaceans, mollusks, fishes, marine reptiles, and marine mammals, based on a study conducted by Carpenter and Springer in 2005.

A Japanese force landed on northeastern Mindoro in the Philippine Islands on 27 February 1942.

Almost three years later, after the invasion of Mindoro by Allied forces, they proceeded to land to Bongabong and heading to and capturing Calapan, the capital of the united Mindoro Province at the time on 24 January 1945.

After World War II, reconstruction and rehabilitation of infrastructure and economy took place on the island, which then constituted a single province. This was partitioned on 13 June 1950 into Oriental Mindoro and Occidental Mindoro by virtue of Republic Act No. 505.[3]

In the decades after the War, Mindoro attracted settlers from overpopulated provinces in the Philippines. Apart from the hope to become landowners or to have better tenancy conditions, the Hukbalahap Rebellion in Central Luzon was an important factor for migration. Under the settlement program of the National Resettlement and Rehabilitation Administration (NARRA) founded in 1954, families from Central Luzon were settled in the Bongabong-Pinamalayan area. This project ended in 1956 after 606 families (3,636 people) were settled on Template:Convert of public land. Since then, new settlers continue to migrate to Mindoro until today.

The island currently sees an ongoing conflict between the Armed Forces of the Philippines and insurgents. On March 6, 2010, eleven soldiers were killed and seven were hurt in a gun battle with the New People's Army in Mansalay, Oriental Mindoro.[4]

Oriental Mindoro covers a total area of Template:ConvertTemplate:PSGC detail occupying the eastern section of Mindoro island in Mimaropa region. The province is bordered by the Verde Island Passage to the north, by Marinduque, Maestre de Campo, Tablas Strait and the rest of Romblon to the east, by Semirara and the rest of Caluya Islands, Antique to the south, and by Occidental Mindoro to the west.

Oriental Mindoro comprises 14 municipalities, with one city, Calapan serving as the provincial capital.

Oriental Mindoro has no distinct wet or dry season. Average temperature ranges from Template:Convert. The province experiences maximum rainfall during the months of June to September. Relative humidity is registered at 87%.[5]

The province is largely rural, with 70% of the population engaged in agriculture and fishing and with only 30% living in urban centers. Tagalog is widely spoken in the province. Other languages spoken are Ilocano and Visayan. Dialects of the Mangyan language are Arayan, Alagnan, Buhid, Hanunoo, and Tadyawan.[6] Because of the RORO trips coming from Caticlan, a few people from the southern part can understand Hiligaynon.

A very large portion of the population are of Roman Catholic conviction (81%).[7] Other Christian and Islamic belief constitute most of the remaining religious affiliation in the province. Other populations practice Anitism, animism, or atheism.

The indigenous people of Oriental Mindoro are the Mangyans (Manguianes in Spanish, Mañguianes in Old Tagalog), consisting of seven distinct tribes. They occupy the interior, specially the highlands. Mangyans have inhabited the island since pre-history. They are believed to have originally traveled from Indonesia and settled down for good in the island.

Template:Stack Oriental Mindoro's rich and arable land is suitable for agriculture. It produces large quantities of rice, corn, coconut, vegetables and fruits like calamansi, banana, rambutan, marang or uloy, lanzones and durian. For that, Oriental Mindoro is also known as the Rice Granary and Fruit Basket of Southern Tagalog. It still is the Banana King and Calamansi King of the region. Its total agricultural area is Template:Convert. Based on agricultural statistics, Template:Convert are devoted to palay production while Template:Converts to coconut plantation. For 2019, the province has been one of the top producers of rice becoming a source of rice for the National Food Authority's rice procurement target.[8] 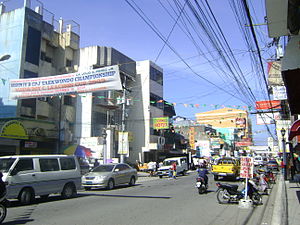 Calapan in the northeast of Mindoro Island is the capital and largest city in the province.

Access from Luzon via the Batangas ports mostly goes through the Verde Island Passage to reach Puerto Galera, the key entry point to Oriental Mindoro. In November 2004, Puerto Galera was voted a member of the UNESCO-affiliated ‘The Club of the Most Beautiful Bays in the World. Puerto Galera features a natural harbor which also protects ships, yachts and bancas from strong typhoons sweeping in from the Pacific.

Puerto Galera, known for white sand beaches and the accompanying honky tonk bar scene on some key beaches, is known for its dive sites with a biodiversity of marine life in and around the coral reefs. Underwater rock formations and coral gardens are home to a variety of marine life, which include numerous species of nudibranch, mantis shrimp, sea anemone, moray and sea fan sea horses. The seas off the coast are host to passing dolphin pods and even the rarer whale shark, and are part of the migratory small whale route from the Visayas.

Towering Template:Convert above sea level, Mount Halcon in Baco, is a popular mountain climbing destination. Local and migratory birds allow birdwatching activities. The province is home to endemic wildlife like the tamaraw, a straight-horned water buffalo.

Other tourist destinations include:

The attraction consists of a natural spring with a swimming pool and picnic cottages. It is located in Baco, and can be reached in 45 minutes by taking a jeepney bound for the Calapan market.

The island measures 5 ha and is noted for its white sand. The place serves as the breeding place of seagulls and turtles. Corals and oysters can be found all around the area. The island is also called "Target Island" because Americans used the island for bombing practice in 1946. It is located in Baco, and can be reached in an hour through a motorized banca from the market square.

It is a rocky island, except for the area facing Buyayao Peninsula. Big snakes called "sobre kama" are found in the mountains. The water around the island is suitable for deep-sea fishing. It is located off the coast of Mansalay, and can be reached in 30 minutes by motorized banca from Mansalay market.

This is a public beach with cottages and other facilities. It is a favorite place for the local people, especially during the summer. It is located in Suqui, Calapan, and can be reached in 15 minutes by taking a tricycle from the town proper.

The place is a good spot for picnicking and swimming, especially during the summer. It is located in Pili, Pinamalayan, and can be reached by taking a jeepney to the port of Barangay Wawa, then an hour's ride by motorized banca to the beach.

It is a secluded beach, with a Template:Convert white sand beach. It is located in Bongol, Pinamalayan, and can be reached in two hours by boarding a Bongol-bound jeepney from the town proper of Pinamalayan and then a tricycle to the beach area.

The Template:Convert waterfalls, situated alongside the road, is actually a series of asymmetrical falls, leading to the grand one, dropping to a frothy waterbed below. The cascading waterfalls are a great attraction to passers-by. Tamaraw Falls is located in Barangay Villaflor, Puerto Galera. It can be reached in two hours by taking a jeepney bound for Barangay Villaflor from Puerto Galera, or Calapan.

An ideal place for swimming, snorkeling, and scuba diving. There are a number of resorts that offer accommodation and other travel and aqua sports facilities to both domestic and international tourists. It is located in La Laguna, Puerto Galera, and can be reached in 30 minutes from the town proper of Puerto Galera by taking a jeepney bound for La Laguna.

This area is ideal for swimming, snorkeling, and scuba diving. A cluster of nightspots abound in this area, which make it popular for evening socials. Cottages with entertainment facilities stand close to each other. Low-budget accommodations are available. It is located east of Puerto Galera, and can be reached in 15 minutes from the Puerto Galera pier by taking a jeepney or an outrigger banca.

Contrary to its name, Small La Laguna is bigger than La Laguna, and has more facilities. It has coral reefs, and its water is ideal for snorkeling and scuba diving. There are diving equipment for rent at nearby dive shops. It is located beside Sabang Beach, and can be reached in 20 minutes from the pier by taking a jeepney bound for Sabang.

This area is not as busy as the other beaches in Puerto Galera. Thus, it is an ideal site for private swimming. It is located in Puerto Galera, and can be reached in 40 minutes by taking a jeepney or an outrigger boat from the town pier.

The white sandy strips of this beach offer excellent opportunities for swimming. Resorts in this area provide entertainment facilities for tourists' greater amusement and leisure. It is located in Barangay San Isidro, Puerto Galera, and is accessible in 30 minutes from the town proper by a jeepney or a boat.

This beach is far from the busy areas of Puerto Galera; thus, it is ideal for those who seek privacy and retreat. It is located in Puerto Galera, Oriental Mindoro, and can be reached by taking a 10-minute jeepney ride from the town proper, to about one kilometer on the beach mark. The remaining distance is covered on foot.

It is a beige-colored sandy beach with cottages for rent. It is located in Roxas, Oriental Mindoro, and can be reached in 10 minutes by a banca from the pier.

Higher education institutions in the province:[9]