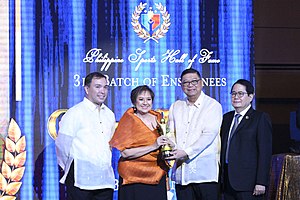 Olivia "Bong" Coo was among the 10 outstanding athletes enshrined in the Philippine Sports Commission (PSC) Hall of Fame on 22 November 2018.

She is the only bowling athlete who has won the All Events titles in regional level, Asian zone level and world level championships in major quadrennial and biennial bowling competitions as well as owned the All Events records on those tournaments at one time in 1986.

She has the most gold medals won in the Fédération Internationale des Quilleurs Zone Championships with 14 in 12 consecutive tournament participation and was the first enshrined in the International Bowling Hall of Fame in St. Louis, Missouri in 1993. Her Zone Masters titles were acknowledged by the World Bowling Writers Hall of Fame Committee equivalent to world medals.

She amassed 77 medals in regional and world events where she competed as a member of the Philippine national squad, (broken down to 37 gold, 23 silver and 17 bronze) making her the most bemedalled Filipino athlete of all time. Bong Coo also has a total of 107 individual championships and has won at least one Masters title for 28 consecutive years. She won her 107th title at the Hiroshima Japan Cup Amateur Masters Championships in 1997, six months short of her 50th birth anniversary.

In 2000, she was voted one of the Philippines Athlete of the Millennium and was awarded an Achievement Diploma by the International Olympic Committee president Juan Antonio Samaranch in recognition of her outstanding contribution in promoting the development and participation of women and girls in sports.

Fully retired from active competition, she has been teaching bowling (as part of the curriculum) since 2002 at the University of the Philippines under the Department of Human Kinetics and Colegio de San Juan de Letran.

Bong Coo was elected Secretary General of the Philippine Bowling Congress in January 2007.