Being a country of diverse cultural history, visible along the old and prominent cities of the Philippines are the silent witnesses to the glory that was once there. The stone and brick houses, the magnificent church facades, the huge courtyard, extravagant archways and one-of-a-kind architectural designs. Listed below are but some of the most famous old metropolitan buildings and infrastructures both survivals and non survivals to the devastating World War II.

The Hotel de Oriente was a three-story building believed to be the first hotel in the Philippines. Strategically located in Binondo, Manila near the Binondo Church, this hotel had 83 rooms and stables for 25 horses, and had a scenic view of the plaza's lawns and fountains, making the hotel a favorite among American tourists. It was an architectural masterpiece of Spanish architect Juan Jose Huervas y Arizmendi who adorned the structure with floral decorations and explicit punkahs or huge man-swung fans in its interior, and a red clay tiles as roof. The hotel became publicly open in January 1889. The Philippine National Hero Jose Rizal stayed in this hotel in 1892 upon his return from Hong Kong. In 1904, the Hotel de Oriente became the offices of the Philippine Constabulary, American Circulating Library, Official Gazette and the Commercial Museum. A portion of the building was partially devastated by the end of World War II in 1945, and years later, it was demolished to give way to a new building.

The Fonda Francesca de Lala Ary, more popularly known as Fonda de Lala, was among the famous hotels during the Spanish colonization of the Philippines. It was built in 1810 by the Russel and Sturgis Company, an American commercial firm in the country, but was later sold to a Hindu by the name of Lala Ary. This foreign house then stood at 37 Calle de la Barraca (Calle Anloague, now Juan Luna Street) in Binondo, Manila where the Allied Bank is now situated. This infamous hotel was mentioned in Jose Rizal's first novel, Noli Me Tangere where the fictional character of Crisostomo Ibarra stayed after his journey in Europe.

Aerial photo of the Luneta hotel in 1930

One of the few remaining structures that survived the devastating World War II, the Luneta Hotel is a six-story building located in San Luis Street (T.M. Kalaw), Ermita, Manila. This was designed by Spanish architect-engineer Salvador Farre and was completed in 1918. During that period, the Luneta Hotel was the only building in the Manila area with French Renaissance-style windows and balconies, adorned with cast-iron grilles. Owned by the Litonjua family, the hotel faces the picturesque Manila Bay and was then surrounded by storage houses and bahay na bato. Relaxing and elegant, the Luneta Hotel became popular during the early American period It served as the nesting ground of American G.I.s during the World War II when the city of Manila was declared open. It withstood series of bombardment and fire, but in 1972 the hotel's edifice started to collapse and a renovation was conducted. It now ceased from operation and was converted to a storage house. Many government officials considered the demolition of this building, however its new owner, the Beaumont Holdings, denounced this and believed that it can still be restored in three years time. The Luneta Hotel was declared a historical landmark by the National Historical Institute.

Recognized as the oldest hospital in the Philippines, San Juan de Dios Hospital was established upon the arrival of Franciscan missionaries, among whom was a lay brother, Fray Juan Clemente, in the islands on 24 June 1578. The friar, having difficulties in learning the native language, began studying the tropical plants of the Philippines and their medicinal values. By the last quarter of 1578, Fray Clemente built a nipa hut and bamboo hospital with two 300 square meters yard, serving the sick and the poor. In 1596, Hermanidad de la Misericordia (Confraternity of Mercy) took charge of the hospital after serving in the 1594 wars. In 1603 and 1645, the hospital was struck by fire and earthquake respectively which drained the confraternity of funds. This made the confraternity to hand over the management to the Brothers of St. John of God, thus, the Hospital San Juan de Dios came to be known. When the religious order was transferred to Cavite, the Council of Inspectors took over the hospital, and was passed to the Daughters of Charity of St. Vincent de Paul. San Juan de Dios Hospital underwent a series of renovation and rehabilitation every time its structure was put into danger. By the time that the Americans settled in the country, the then hospital for the poor now admitted affluent patients. 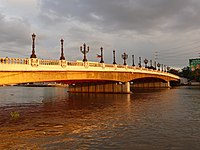 The first bridge to be erected across the grand Rio del Pasig was the Puente Grande. Built in 1632, this wooden bridge connects Intramuros and Binondo together, making it easier and relatively faster to travel from one end to the other. It underwent several reconstructions and renovations as it was always heavily damaged by earthquakes. After the 1863 earthquake, Puente Grande was renamed to Puente de España. The bridge was replaced in 1875 widening its spans to a masonry of six and two central houses. It can accommodate both pedestrians and vehicles including horse or carabao drawn carts and carriages, and tranvia. This bridge was replaced for the last time with a neo-classical design by Juan Arellano in the 1930s, and was called the Jones Bridge.

The first suspension bridge not only in the Philippines but in the entire Southeast Asian region was the Puente de Colgante, named after the Spanish word colgar meaning “to suspend.” Completed in 1852 by the Matia, Menchacatorre y Cia, a private company, the bridge connects the Arroceros district to the Quinta Market in Quiapo, and was considered as the first tollway in the country since both pedestrians and vehicles passing through this bridge were charged a toll fee.[1] This bridge famed the Philippines as the “Paris of the Orient.” Today, this suspension bridge is called the Quezon Bridge.

During the Spanish colonial period, among the modern infrastructures introduced in the Philippines to last for years was the Ferrocarril de Manila-Dagupan, the first railway system in the country. By virtue of a royal decree by King Alfonso XII of Spain dated 25 June 1875, the Inspector of Public Works of the Philippine Islands was required to formulate and submit a plan for the construction of a railroad line in Luzon. Five months later, the head of the Public Works Office, Don Eduardo Lopez Navarro, submitted a plan bearing the title Memoria Sobre el Plan General de Ferrocarilles en la Isla de Luzon. By 1 June 1887, Don Eduardo Sykes of the Ferrocaril de Manila-Dagupan (later, Manila Railway Company Ltd. of London) was awarded the concession for the construction of railway system. The engineering of the infrastructure commenced on 31 June 1887 until 24 November 1892 when it was finally publicly opened. The railway measured 195 kilometers from Manila to Dagupan, Pangasinan. By the 1940s, the railway was extended to reach the provinces of Legaspi, Albay and San Fernando, La Union. Considerable damages afflicted the ferrocarril during World War II, and the United States Army which then temporarily had control over the Manila Railway Company, was able to restore 40% of the railway's original condition by 1945. By virtue of Republic Act No. 4156 passed on 20 June 1946, the company was renamed to what it is known today, the Philippine National Railway.

The Banco Español Filipino de Isabel II, now the Bank of the Philippine Islands, was the first bank in the Philippines established in 1851. Named after the daughter of King Ferdinand VII, Isabel II, who passed away in 1830, the bank was then located at the Royal Custom house or aduana in Intramuros. Twenty-three years before the bank was built, in 1828, King Ferdinand VII of Spain issued a decree mandating the establishment of a public bank in the Philippines.[2]. On the other hand, it was the Spanish Governor General Antonio de Urbiztondo y Eguía who do the actual organization of the bank, asking the government officials in the Philippines to support the Junta de Autoridades in approving the bank's statutes and by-laws on 11 August 1851. The Royal Decree also authorized the bank to issue the country's first bank notes or paper money on 1 May 1852. One of its first branches stood at No. 4 Plaza Cervantes in Binondo, erected in January 1892, to accommodate Chinese businessmen. Its architectural design was similar to the other buildings located in Binondo, with elaborate columns and huge archway of bricks and stones. On 3 September 1869, the bank came to be known as El Español Filipino after Queen Isabel II was ousted from the Spanish throne.

Among the important influences of the Spanish culture in the Philippines was one of their famous recreations, theater plays. In 1790, Teatro de Binondo, the first Spanish theater in the Philippines, was built. It was owned by a certain Don Narciso de Escosura and was located along Calle San Jacinto in Binondo area. Many Filipinos and Spanish alike, especially those from the upper social class, frequented this theater to watch Spanish plays like zarzuela. This recreation became important to Filipino culture that many other theaters were established in other parts of the country, namely Teatro Circo de Bilibid, Teatro Circo de Zorilla (a theater for the elites), Teatro Circo de Porvenir (where Andres Bonifacio and Macario Sakay acted) and Teatro Guinol Chino (to accommodate Chinese audiences), among many others.

La Insular Cigar and Cigarette Factory was another landmark that once adorn the area of Plaza Calderon dela Barca in Binondo. Same as the Hotel de Oriente, this structure was built through the plan and design made by the Spanish architect Juan Jose Huervas y Arizmendi, under the command of owner Don Joaquin Santamarina together with his associates, Don Luis Elizalde and Don Manuel Clemente. This building was established in 1880 after the government abolished the monopoly of tobacco in the Philippines. Its three-story office and factory stood magnificently at No. 20 Binondo Square in Manila with an imposing and tall archway, a huge courtyard, a broad staircase and a projecting balcony, amply decorated with a balustrade and lamp posts. For years, it became a special attraction in the Plaza until its tragic destruction by fire in 1944.